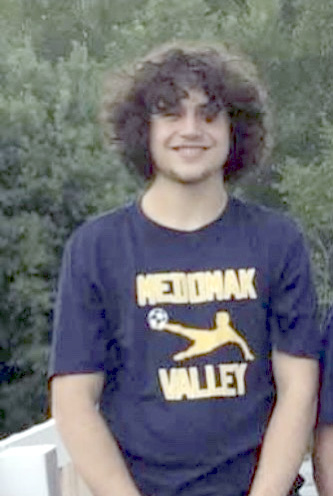 Zachary Michael Winpenny, aka Zak, Winny, and Chicken Nugget, left this world too soon on Wednesday, Dec. 16, 2020 due to injuries sustained in an automobile accident. He was only 17.

Born in Vancouver, Wash., he was the beloved son of Michelle Abbotoni and Charles “Loc” Winpenny. Zak moved to Maine when he was 6 months old. As a youngster he attended local schools, participating in the gifted-and-talented program and a winning Lego robotics team.

A talented and competitive multi-sport athlete, he started at a young age with a love of basketball, baseball, and soccer. He was proud to have played on championship soccer, Little League, and all-star teams. Zak finished up his Little League playing on the same team as his little brother. Zak’s passion for sports inspired his brother to become a talented basketball player himself — of course because Zak taught him everything he knew. His competitive spirit shone through in everything he did. Zak won multiple blueberry pie eating contests at the Union Fair, and raced in numerous crate races at the Lobster Festival, even finding his GoPro live footage on the local news station.

Like all brothers, Zak and Aiden had their scuffles, however they were quick to put that all aside when it meant they could team up and “raz” their mother. Other special times included summers at family camps at Sennebec and Beaver Lodge, and Crawford Lake with the Cheesmans. He also loved going to NASCAR races and other adventures with his Abbotoni grandparents. Zak had a subtle sense of humor, likely cultivated while watching all nine seasons of “The Office” at least four times. He was always able to come back with the best one-liners. Zak also loved convincing his brother to cook all his meals. His family fondly remembers that Zak never really learned to cook, and really didn’t care to try. His idea of “cooking” a meal was assembling his own tacos from ingredients already prepared for him. They said candy and junk food were staples in his diet, and his favorite things to eat.

Zak had more friends than anyone could count, and his teammates were some of the closest friends he had. He was a starting varsity soccer player all four years of high school. In a recent article written in memory of Zak, his soccer coach stated they “were truly a second family.” Off the pitch, he enjoyed hanging out with his friends, playing video games, fantasy basketball, and chilling at the TCC. Zak was easygoing and laid-back, but a competitor through and through. He had integrity on and off the field, and will be truly missed by all who knew him.

Zachary is survived by a very large extended family. On his maternal side, his mother Michelle Abbotoni and her partner Zach Miller, who was like a second father to Zak; his brother, Aiden Abbotoni, all of Union; his grandparents, Mike and Lydia Abbotoni of Union; grandmother, Kristi Gushee Pilgrim and her husband Jim of Washington state; great-grandmother, Valerie Gushee of Union; aunts and uncles, Amber Abbotoni, Chris Abbotoni, Erika Pan, Melissa and Brent Mellen and their children Bennett and Nolan.

Family and friends are invited to a “walk-through” visitation from 2-5 p.m., Wednesday, Dec. 23, 2020 at Burpee, Carpenter & Hutchins Funeral Home, 110 Limerock St., Rockland. Due to COVID-19 restrictions, all guests are asked to wear a mask and to enter and then exit the building after a brief visit to give all those in attendance the time and distance to greet the family. There will be an opportunity to write a memory of Zak to leave with the family as well.

Zak’s family looks forward to a future “post-COVID” celebration of his life, which will be announced around his birthday in May of 2021.

To share a memory or condolence with Zak’s family, please visit their Book of Memories at bchfh.com.