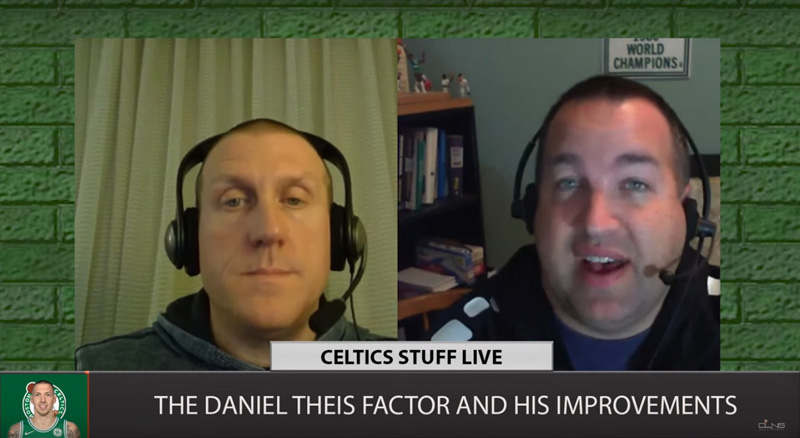 Newcastle residents know Jon Duke as their friendly and knowledgeable town administrator. But for 14 years, die-hard Boston Celtics fans and media figures have known Duke as co-host of the first and longest-running podcast on the team, “Celtics Stuff Live.”

“We were the first Celtics podcast,” Duke said. “Now there are a billion of them.”

Duke’s Celtics fandom dates to 1986 and one of the greatest basketball teams of all time.

He counts the championship-clinching victory over the Houston Rockets in the Boston Garden as his favorite Celtics memory. He was a “full-time Celtics fanatic” from then on.

Larry Bird, the leader of the ’86 team and one of the greatest basketball players of all time, is his all-time favorite Celtic.

Now 41, Duke got his start as a Celtics commentator during leaner years for the team – there were many between ’86 and the C’s next championship in 2008.

“I was never a good player. I was awful – horrendous,” he said. Though he now stands 6 feet, 2 inches tall, he was the shortest kid in his freshman class at Camden-Rockport High School and “couldn’t shoot a lick.”

His love for the game found another outlet in commentary.

“You can always talk and watch sports. It doesn’t matter how good you are,” he said.

Around 2003, Duke started writing about the Celtics for a blog, Boston Sports Media Watch. He had his own section on the site, called The Full Court Press.

A couple of aspiring commentators, Jim Metz and Justin Poulin, saw Duke’s writing and invited him to appear as a guest on a new show about the Celtics.

“It wasn’t even called a podcast at that point – it was just a show on the internet,” Duke said. The name of the show was “Celtics Stuff Live.”

After a guest appearance on an episode about the 2005 draft, Duke joined the show as a co-host.

In the 2006-2007 season, “Celtics Stuff Live” became the first internet outlet to obtain media credentials from the Celtics.

Mike Gorman, play-by-play announcer for the Celtics since 1981, was an early supporter and guest on the show.

In the summer of 2007, the Celtics traded for Ray Allen, a sharp-shooting guard, and Kevin Garnett, a power forward known for his tenacious defense, to play alongside homegrown star Paul Pierce.

When the Celtics blew out their historic rival, the Los Angeles Lakers, to close out the 2008 NBA Finals at home, Duke had a new contender for favorite Celtics moment.

“The second-best situation was that night,” Duke said. “Beating the Lakers, beating Kobe (Bryant) – can you beat that? I don’t think so.”

The “Celtics Stuff Live” postgame show was simulcast on the radio station that carried the game.

Metz left after the championship season and Duke and Poulin took the show to Comcast SportsNet New England, then the television network that aired Celtics games.

“It’s a little bizarre to see your picture on the postgame show and the logo of ‘Celtics Stuff Live,’ but that was a real thing that happened,” Duke said. The affiliation continued through the 2009-2010 season.

Poulin left the show some time later. Duke kept it going with John Karalis, co-founder of the Celtics website Red’s Army, for two seasons until Poulin returned for the 2014-2015 campaign.

They have had a lot to talk about this season.

Duke, like many Celtics fans, was happy to move on from the Kyrie Irving era. A dazzling talent with an equally great ability to disrupt team chemistry, Irving left in free agency to sign with the Brooklyn Nets.

The offseason also saw the loss of forward Al Horford to the rival Philadelphia 76ers and the arrival of Kemba Walker from the Charlotte Hornets.

Through their first 27 games, the Celtics are 20-7, good enough for second place in the Eastern Conference. Why, after the loss of so much talent, has the team exceeded expectations?

“I think Kemba Walker, his leadership, his attitude, has been the perfect antidote to last year, to what ailed that team,” he added.

Like Irving, Walker is a point guard who leads the team in scoring. Unlike Irving, he has good chemistry with his young teammates – whose improvement is an equally important factor in the team’s success.

“I really think they can win the championship this year,” he said. “I wouldn’t have thought that before the season, but I do now.”

Duke is passing on his love of basketball to his sons and other kids  as head coach of a junior high travel team and assistant coach of a fifth grade team.

He is a better teacher, it seems, than a player. “Both of my kids are better than I will ever be,” he said.

He even applies basketball lessons to town government.

Just like Bird was the best scorer on the ’86 Celtics but would do whatever was necessary to win, so town officials fulfill whatever task presents itself at any given time.

“It doesn’t matter if I’m the town administrator or the third deputy clerk. We’re all trying to pull in the same direction, do the same thing, to serve the town,” Duke said.

“Celtics Stuff Live” is available on the iTunes store and various other outlets. Duke tweets about the Celtics @csl_duke.