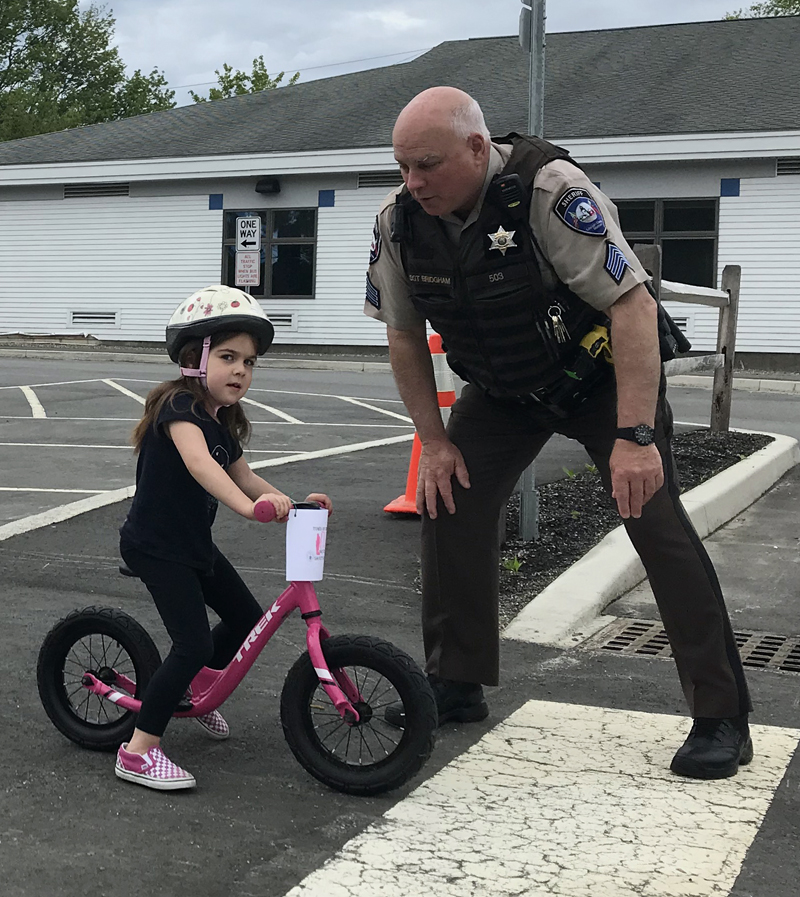 Bristol kids are a little safer on the roads this summer thanks to the dedication of a small group of public officials and volunteers.

The town of Bristol, with Bristol Fire and Rescue and the Lincoln County Sheriff’s Office, hosted a bicycle safety rodeo at Bristol Consolidated School on Saturday, June 22.

The sheriff’s office brought two big boxes of bike helmets to give away, courtesy of Karl’s Kids.

I was there with my 3-year-old son, Harrison.

Harrison, who has not taken much of an interest in riding yet, got his first bicycle helmet. Lincoln County Sheriff’s Office Sgt. Mark Bridgham patiently helped find the right fit and adjust the straps.

Later, on a course set up for the event, Bridgham taught Harrison and other children the rules of the road: look both ways before you enter the road, ride with traffic, stop at stop signs.

More than a few adult bicyclists could benefit from going through Bridgham’s course (and more than a few drivers need a refresher on how to share the road with bicyclists).

While Harrison may not venture onto the roads of Lincoln County just yet, I think he will benefit from learning these lessons early.

A total of 15 children attended the event, according to Bristol Fire Chief Paul Leeman Jr., who expects to see the event grow in future years.

Most or all of the children were outfitted with new helmets, and some took helmets home to their siblings.

According to Leeman, the first-of-its-kind event has its roots in an “idle discussion” between Leeman and Bristol Deputy Treasurer Lindsay Currier in February.

The pair did not remain idle for long.

Currier, an avid bicyclist, was the “brains” behind the event, according to Leeman, while Leeman, as fire chief, is eager to keep local children safe.

The fire chief’s sister, Fay Leeman, and one of his young firefighters, Hannah Corson, were among the volunteers at the event, while Currier led young cyclists through an obstacle course.

As a parent, my goal was for Harrison to see other children on their bikes and maybe take a little more interest in his own.

I was grateful to see so many people volunteer their time to keep our children safe.

It occurred to me that those in public safety would rather dedicate all the hours it takes to pull off an event like this than respond to one terrible and avoidable bicycle accident.

As the saying goes, an ounce of prevention is worth a pound of cure.

Leeman also sees the event as a way to encourage kids to get outside, and believes converting kids into good practitioners of bicycle safety has a multiplier effect.

Kids are good advocates for what they learn, he said, and will share safety tips with their parents, older siblings, and friends.

Next year, Leeman says, the organizers plan to hold the event while school is still in session. It will take place on a Saturday again, but in May or early June, when he expects more families will attend.