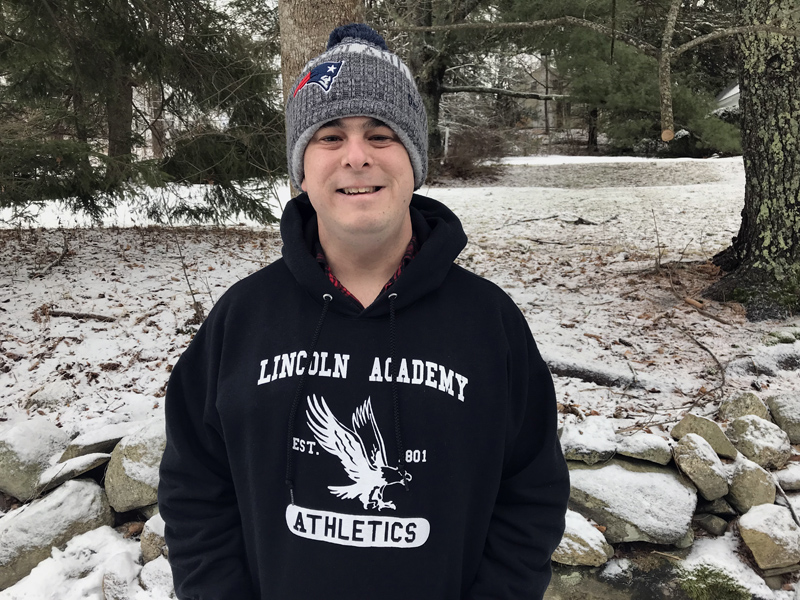 I listen to sports talk radio almost every day on my commute to and from the office: “The Morning Jab” and “The P.M. Jab” on 96.3 The Big Jab, out of Portland.

The hosts talk Boston sports, mostly, with some Maine-specific additions like the Portland Sea Dogs (new manager Joe Oliver – no relation – was on “The P.M. Jab” last night).

As anyone who listens to these shows knows, they have regulars like any business – people who call every day or close.

My favorite caller is Blair.

Blair doesn’t always have a “hot take” on the topic of the day. He takes a ribbing from the hosts and other callers because he has a history of shifting allegiances, most infamously singing the Philadelphia Eagles fight song on the air after they beat the Patriots in last year’s Super Bowl.

What Blair does have is an infectious enthusiasm for sports and a knack for saying funny and unpredictable things.

A few months ago I was sitting at my desk when I heard a familiar voice in the front office. It was Blair, who had come by to see our sports reporter.

I introduced myself and learned that Blair lives in Damariscotta.

I had to interview him.

What does he see in the Patriots’ future?

Will he really stand by the Patriots this year, win or lose?

On Thursday, I sat down with Blair at the home he shares with his mother.

Blair Sharp, 28, was born in Long Beach, Calif., and grew up in Orange County, where his mother, Brooks Sharp, was a high school math teacher. She retired and they moved to Damariscotta in June 2017.

Blair was a little down Thursday because the hosts of “The P.M. Jab” won’t let him forget about the Eagles and because “The Morning Jab” plays his rendition of the fight song every morning.

“I want them to erase it, because it’s not good for a Patriots fan,” Blair said.

He is a Patriots fan now, for better or worse. “Staying right with them, right there, right now, not moving,” he said.

On Thursday, he correctly predicted the outcome of Sunday’s divisional round match-up between the Patriots and the Los Angeles Chargers.

“I say (the Chargers) are going to freeze their butts off when they realize it’s 28 degrees,” he said.

The Chargers indeed looked sluggish at Foxborough as the Patriots jumped out to a 35-7 halftime lead, then coasted to a 41-28 win.

Blair sees another victory ahead as the Patriots travel to Arrowhead Stadium to face the Kansas City Chiefs and their young quarterback, Patrick Mahomes. He notes the cold weather and crowd noise as factors, but knows how the Patriots will overcome.

“We’re going to be up by two touchdowns right away and we’re going to shut up the Arrowhead fans,” Blair said.

I asked Blair about his daily calls. As it turns out, Damariscotta might be home to the most prolific caller to sports talk radio around. He calls local, regional, and national shows at all hours of the day and night.

Every morning, Blair reads the sports page of the Portland Press Herald, then calls “The Morning Jab,” Brooks said.

Despite his busy on-air schedule, Blair makes time to serve his new community.

An avid fan of Lincoln Academy sports, he sells raffle tickets at the door during varsity basketball games. At the CLC YMCA, he runs the scoreboard for youth basketball and works on the chain gang for youth football. He has his 100-hour volunteer pin from Cove’s Edge nursing home.

Blair takes his celebrity in stride – Brooks says he doesn’t think of his numerous calls as anything unusual – but his fans sometimes get a little starry-eyed.

Some time back, Blair and Brooks went to Pat’s Pizza in Brunswick to meet “The P.M. Jab” hosts Javier Gorriti and Chris Sedenka.

At Pat’s Pizza, several listeners introduced themselves and said they came to meet Blair, Brooks said. One man asked to take a photo with Blair to show his wife, saying she wouldn’t believe he had met him otherwise.

I did the same Thursday, taking a selfie with Blair before I left.

One last word on the Eagles debacle. As a lifelong Patriots fan, I think Blair’s only fault is loving sports too much – hence the occasional enthusiasm for the “wrong” team in a culture, sports fandom, that values loyalty above all else.

I, for one, am proud to welcome Lincoln County’s most famous sports talk radio personality back into the fold.