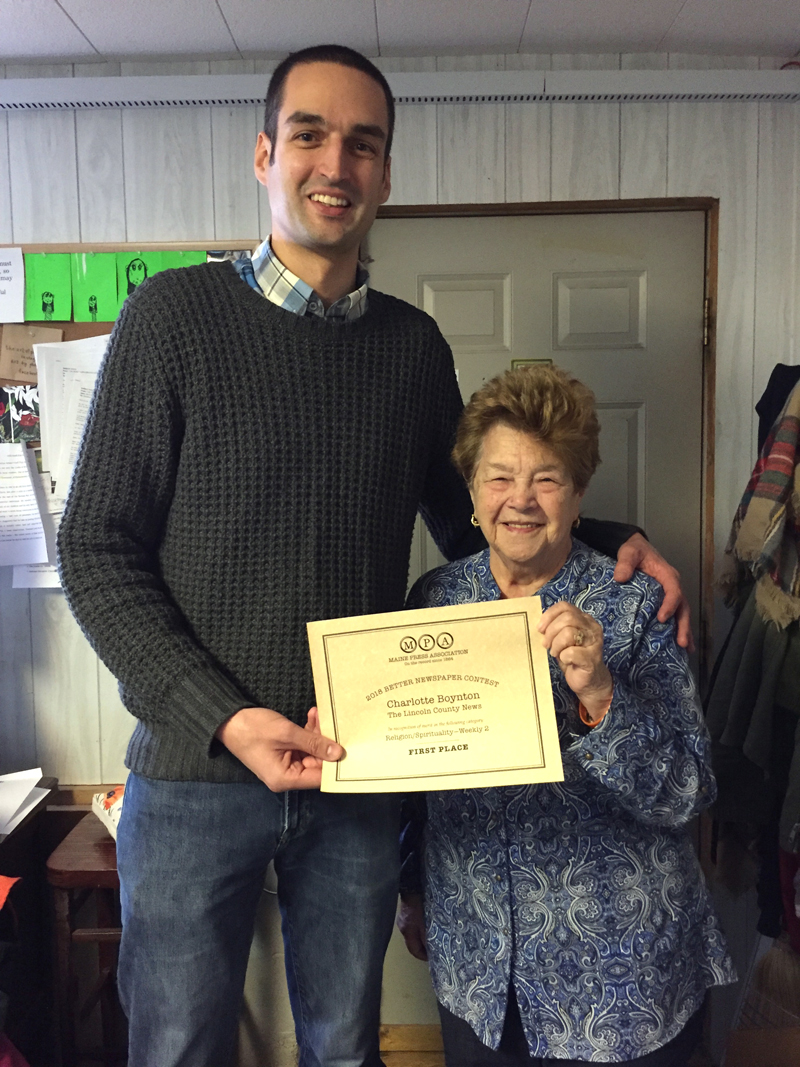 Charlotte Boynton accepts a certificate for first place in the Religion/Spirituality Story category of the 2018 Maine Press Association Better Newspaper Contest from J.W. Oliver. At 86, Boynton may be the oldest active newspaper reporter in Maine.

What makes a good reporter?

At 86, Charlotte may be the oldest active newspaper reporter in Maine. An informal survey of newspapers across the state didn’t turn up any competitors.

She could retire and avoid some late nights and early mornings. The Wiscasset selectmen’s meetings, for example, start at 6 p.m. Tuesday and sometimes run for hours. Charlotte has to file her copy immediately because the paper prints Wednesday morning.

“I can remember one night my son was getting up to go to work at 4 o’clock and I was still writing,” she said.

“I learn something new every day. I enjoy interviewing people,” Charlotte said. “The bottom line is, I enjoy doing what I do. I don’t consider it work.”

Charlotte’s experience and connections often benefit her as a reporter. People call her with tips. People who might ignore other reporters’ calls, including mine, return Charlotte’s.

She builds those relationships with trust. Sources trust she will report the news in an accurate and fair manner.

It can become a challenge to report on people you have known for many years, people you like and respect. But a reporter must set aside sentiment.

“Regardless of my relationship with them, I don’t give them any more benefit than someone I don’t know,” Charlotte said. “If they do something stupid that’s worth reporting, I write it.”

The opposite applies too – she reports on a stranger the same way she would report on a friend.

Judy Colby chairs the Wiscasset Board of Selectmen.

“I trust her,” Colby said. Charlotte checks her facts and “has great integrity,” she said.

“She looks at a situation from all angles,” Colby said. “She’s not biased one way or another. She reports the truth.”

This approach hasn’t changed much over the years.

“She was always very fair,” Gordon said, and she reported the facts without commentary. “She didn’t add to it to sell papers.”

Throughout her career, Charlotte has covered the Maine Yankee nuclear power plant, its closure, and efforts to remove toxic waste from the site.

Eric Howes, director of public and government affairs at Maine Yankee, described her as hardworking, direct, fair, accurate, and knowledgeable.

She takes time, he said, to learn about highly technical issues and translate them into language anyone can understand.

I asked Charlotte if she could sum up her philosophy as a reporter.

“Do unto others as you would have them do to you,” she said without hesitation.

While Charlotte has many years of experience in journalism, it is actually her third career.

Charlotte Ann Garey was born March 18, 1932 in Bath. Her grandparents raised her until the age of 10, when her grandmother died.

Her grandfather was ill-equipped to raise a little girl, so, at 11, she came to live with a Salvation Army officer and his family in Rockland.

After a few years, the officer transferred to Haverhill, Mass., where Charlotte graduated from high school and briefly attended business college before going to work as a fancy stitcher in a shoe shop.

She moved back to Maine at the age of 20. In the 1970s, a doctor told her she had to find less physically taxing work. She went back to business school at Casco Bay College in Portland and found work as an assistant payroll clerk at Congress Sportswear in Bath.

She moved to Wiscasset in 1975 and soon started writing for The Times Record. “I needed extra money,” she said, and she responded to an ad for a Wiscasset columnist.

Charlotte and her staff of two worked out of an office behind a smoke shop on Main Street.

On Wednesday, Charlotte would deliver the copy to the press in Boothbay Harbor at about 5 a.m. before going to a second job at Bath Iron Works.

Once divorced and thrice widowed, she did all this while raising five children, sometimes on her own.

She worked at the newspaper and BIW for about a year before Cowan told her to choose one or the other. She chose BIW, where she worked her way up to supervisor of inventory control before retiring in 1998.

Retirement was boring, so she called Mary Brewer, then-editor of the Boothbay Register and Charlotte’s mentor, and told her she wanted to come back to work.

A part-time job as a reporter at the Wiscasset Newspaper turned into a full-time job and Charlotte stayed until 2013, when she ever-so-briefly retired again before accepting a part-time job with the LCN.

While she “only” works for us a couple days a week, the rest of her time looks little like retirement.

A 52-year member of the American Legion Auxiliary in Bath and former president of the state auxiliary, she now serves as state parliamentarian.

An expert seamstress who has made everything from a smelt shanty to wedding gowns, she mostly makes doll clothes now, which she sells at craft fairs. She lives in Woolwich with her partner, Bob Fairfield.

By the way, Charlotte isn’t going anywhere anytime soon. She told me to say as much so readers wouldn’t think this was a retirement piece. I told her I wouldn’t let her retire if she wanted to.