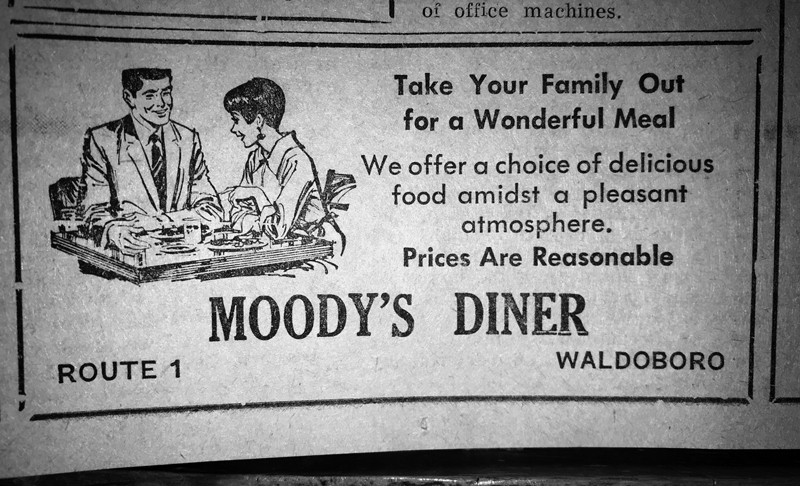 An advertisement for Moody’s Diner in the Nov. 7, 1968 edition of The Lincoln County News.

From The Lincoln County News, November 1968:

Election Day: Lincoln County backed the Nixon-Agnew ticket on Nov. 5, giving the Republican from California 5,659 votes to 3,378 for Democrat and then-Vice President Hubert Humphrey and 231 for Alabama segregationist and former Gov. George Wallace.

“In Lincoln County, nominally Republican, the vote was much as usual,” according to the editorial in the Nov. 7 edition.

Humphrey, however, carried the state, an outcome the editorial attributed to the popularity of his running mate, U.S. Sen. and former Maine Gov. Edmund Muskie.

Lincoln County politics have shifted in the last 50 years, with the county going Democratic in every presidential election since 2000.

Squash effluent: Complaints about pollution of the Medomak River by the Medomak Canning Co. led to a Nov. 4 hearing before the Water and Air Environmental Improvement Commission, a predecessor of the Maine Department of Environmental Protection.

“The hearing resulted from a complaint in which the (commission) charged that the canning company was polluting the Medomak River … with squash effluent,” according to an article on the Waldoboro Area page of the Nov. 7 edition.

Waldoboro Town Manager C. Warner McVicar “said that there is no question that there is squash slime or that fish are being killed,” the newspaper reported.

“He said the company has had adequate time to prepare a treatment method and that it is time to protect the citizens of Waldoboro and then asked if the board could prohibit squash canning until the problem is solved.”

The commission did not come to a decision at the hearing.

As a later article explained, pollution of the clam flats was a driving factor behind efforts to clean up the Medomak – and it remains so today. 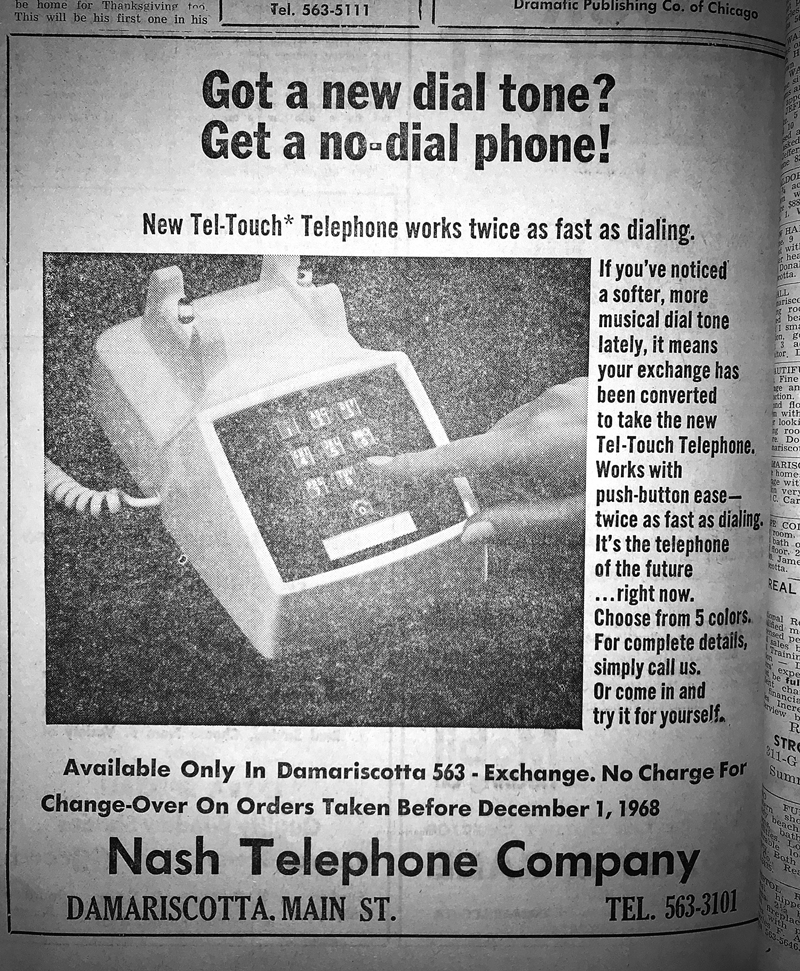 An advertisement for Nash Telephone Co. in the Nov. 14, 1968 edition of The Lincoln County News touts the benefits of a “no-dial” phone. “It’s the telephone of the future … right now,” the ad says.

“Waldoboro recently completed an expensive, sophisticated sewage treatment plant which was sold to the citizens on the premise the village polluted the river and with the plant in operation the clam flats below the town could be opened to digging,” the Nov. 28 article reported. “The river is still polluted, the clam flats are still closed.”

A storm adventure: The front page of the Nov. 14 edition reported a fisherman’s adventure during a storm two days prior. The reporter, sadly, did not receive a byline for his or her lively account:

“The storm at New Harbor broke Lee Reilly’s dragger adrift, driving her down on Abe Gilbert’s seine dory, sinking it, seine and all. Mr. Reilly managed to board her alone before she struck at the head of the Harbor.

“With no mooring available, high winds and waves in the Harbor, Lee took her outside, being (practically) buried under in the huge seas. He ran her through it, up Round Pond sound to Zahn’s Wharf at Medomak, where there is a good lee from northeasters.

Sen. Dow goes to Fiji: A brief item on the Waldoboro Area page of the Nov. 14 edition reported that a senior at Medomak Valley High School, Dana Dow, would present an “illustrated lecture” at the next meeting of the Medomak Valley Senior Citizens.

“Dow will show slides of his trip to Albury, Australia, last summer, with stops at San Francisco, Hawaii, and Fiji Islands.”

Dow is now a state senator and will soon become Senate minority leader – the top-ranking Republican in the Legislature.

“Principal (Brainard) Paul said the new high school was not finished but classes would be held there while the school building is completed,” the newspaper reported Nov. 14. The school had opened to the faculty Nov. 12 and to students the next day.

“The new high school will house 606 students from Waldoboro, Warren, Washington, Union, and Friendship and is built for a capacity of 825 students. The building contains 30 classrooms and special-purpose areas.”

Better than Jolly John’s: On the lookout for a car to replace our beat-up 2006 Ford Fusion, the prices in a Nov. 28 ad for Thanksgiving specials at Hall Motors Inc., Route 1, Newcastle, caught my attention.