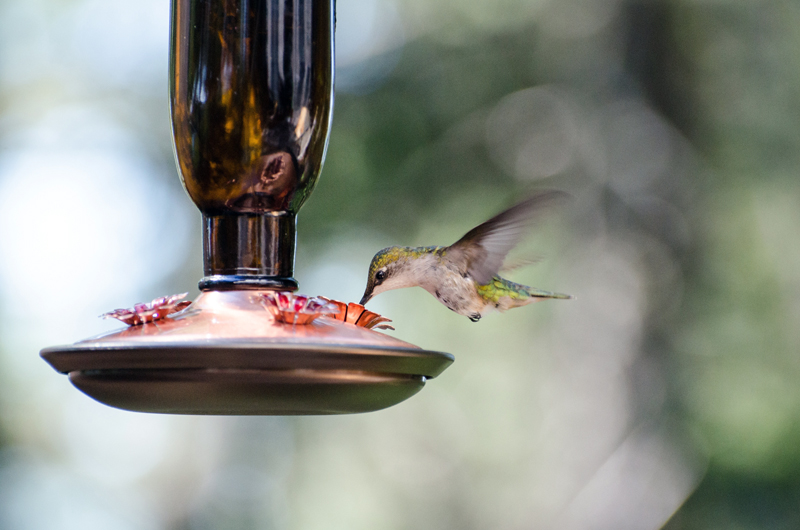 Somewhere, far south of here, a male ruby-throated hummingbird is making its way to Maine. Weighing little more than a penny, this tiny bird has been traveling since it left its winter home in southern Mexico or Central America. It has already traversed the Gulf of Mexico, flying nonstop for 500 miles. Juvenile and female hummingbirds are following its path, albeit a week or so later.

Our male hummingbird is flying close to the ground during the day, looking to refuel at sugar-water feeders and nectar-rich plants. If it can, it will also eat spiders and tiny insects. Sap wells, holes drilled by yellow-bellied sapsuckers into white birches and fruit trees, also provide food. At night, the bird rests in preparation for another day of journeying north.

Throughout this odyssey, our little hummingbird is dodging death and disaster around every corner. It will face down habitat loss caused by urban sprawl and deforestation. It will successfully avoid hungry cats, window collisions, cars, and areas without natural foods and cover. As it flies, it will push through rough winds and severe storms. The climate and terrain will change, but the destination remains fixed.

Guided by thousands of years of instincts, the ruby-throated hummingbird in question will pass through countless backyards, gardens, forested areas, and towns on its trek to reach its summer breeding grounds. When this avian jewel reaches its final destination, it will have crossed an entire continent. In early May, when this male reaches your nectar feeder, it will have completed an epic, almost unimaginable journey.

Over the next few weeks, hummingbirds will come closer to northern New England. As of this writing, some hummingbirds have made it as far as the mid-Atlantic states. Records from Journey North, a hummingbird tracking website, show that the first migrants to our area usually arrive anywhere between April 29 and May 8. Last year, the first hummingbirds were reported in Hope on May 5, Wiscasset on May 6, Bremen on May 7, and Belfast on May 8. I recorded my first visiting hummingbird in Newcastle on May 7.

In a world currently filled with uncertainty, the spring return of the ruby-throated hummingbird is a joyous certainty. Blurs of light and sound, these winged green marvels will soon zoom and hover over our gardens and backyards. Hummingbirds have always been fascinating and awe-inspiring birds. Their very existence symbolizes freedom and unlimited mobility. But, perhaps this year, they represent something far more potent: hope.

I will take comfort in their return. I hope you will as well.