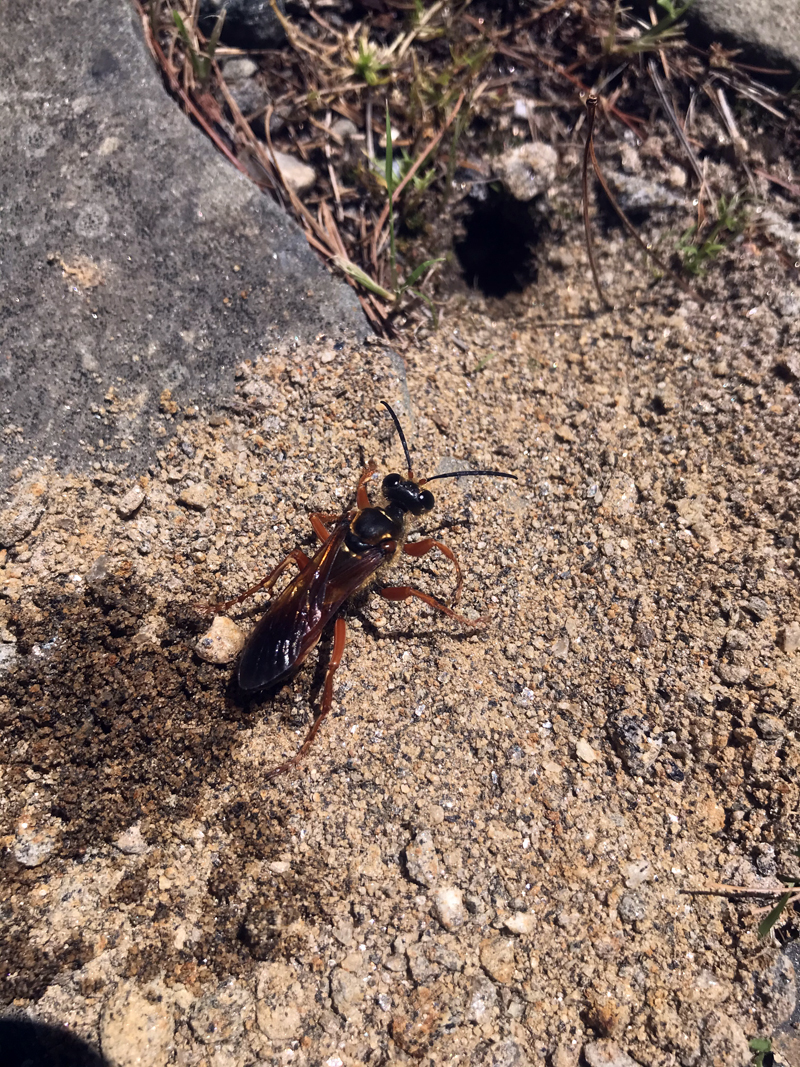 Before I explore this week’s species, I wanted to respond to the thoughtful letter from Claire Yackel in last week’s paper. Claire wrote about the lack of Lincoln County-based resources for wildlife. The only wildlife rehabilitation center in our area is Avian Haven in Waldo County. Located in Freedom, Avian Haven assists injured and orphaned wild birds, as well as turtles. They can be reached directly at 382-6761.

If you have general wildlife-related questions, feel free to contact me. If I don’t know the answer, I will gladly put you in touch with someone who does. The National Wildlife Federation is also a great resource. Found easily online, they can offer humane solutions to wildlife-human conflicts.

For the next few weeks, I’m going to be writing about insects. The first of these is the digger wasp, a type of wasp that excavates nest holes in the ground. Digger wasps are also known as sand wasps or thread-waisted wasps and belong to the family Sphecidae. I observed several of these wasps on a stone patio in South Bristol recently. As I watched, the wasps pulled clumps of dirt out of the ground with military-like precision.

Digger wasps are harmless to humans. In your garden, they are busily feeding on plant nectar. Their young are fed grasshoppers, crickets, and the occasional caterpillar. Unsuspecting insects are paralyzed with venom and then airlifted back to the nest. Dragged into the hole, the prey has an egg laid on it and is then buried. The next generation of digger wasps is born with a pre-deposited food source.

I watched a decapitated grasshopper being pulled by a digger wasp into one of these holes. The wasp crawled in to inspect the nest and then dragged the grasshopper’s lifeless body into the hole. The head, likely severed during the hunt, lay a few inches away. Nature is beautiful, but it can also be brutal.

Digger wasps have a short lifespan. They appear in June and are active now. Last year’s young are now busily preparing for the new crop of wasps. Watch as they fly, dig, and move through open areas with dry, sandy soil. And if you’re a gardener, appreciate their predation of grasshoppers.

Digger, sand, or thread-waisted wasps may be excavating your patio at the moment. Leave them be, as they only hunt destructive pests. If nothing else, I wouldn’t mess with a creature that is straight out of a horror movie.