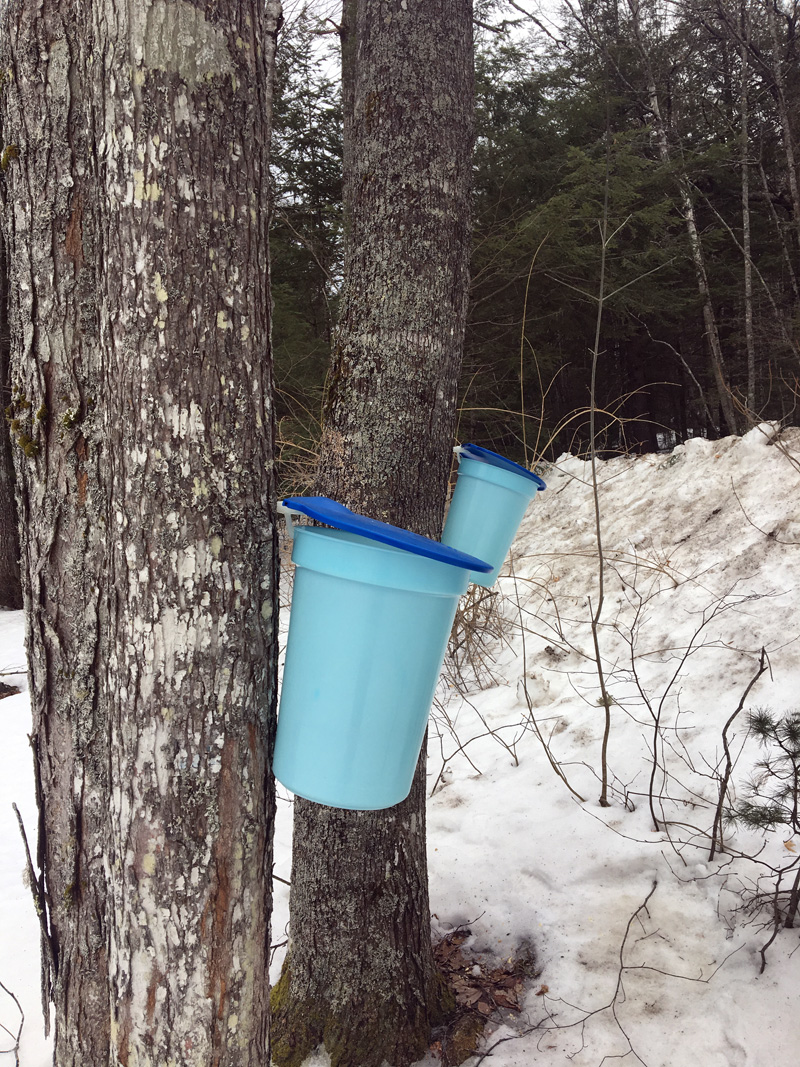 Maple trees will begin to be tapped over the next several weeks. March is traditionally maple sugaring season in Maine, but trees can be tapped in the latter part of February. If the weather cooperates, sap buckets will soon reappear in sugarbushes across Lincoln County. If not, look for rows of buckets to be hung in early March.

For maple sap to flow, temperatures need to remain above freezing during the day while staying below freezing at night. Optimal sap production occurs when daytime temperatures reach 40 degrees or above. Like all forms of agriculture, much of the sugaring process is dictated by Mother Nature. Cold days and unseasonably warm nights can temporarily arrest sap flow and slow down the production of maple syrup. Overall, the season may last a month or more.

In northern Maine, maple sugaring begins in mid-March and extends well into April. The colder climate is not conducive to tapping trees in February. In southern New England, however, the season begins much earlier than ours. Maple sugaring occurs as far south as Tennessee and as far west as Missouri. The timing of the season varies by region and local weather.

All maple sugarers boil sap (which is largely water) into the popular syrup we all know and love. However, there are a few key differences between a backyard operation and large-scale commercial producers. Plastic tubing transports sap on larger sugarbushes, while traditional buckets are still hung in small outfits. And while larger sugarbushes may have thousands of taps, your local hobbyist may have only a handful. Local farms offer maple syrup seasonally, a bridge between the fall harvest and spring planting.

This will be my fifth year tapping the red maples in my front yard. I always appreciate seeing the first drops of sap as they exit the tree. And while I do a boil each year, I drink much of my sap. There is nothing quite like drinking from your own tree. Self-taught, I learned the process through direct experience, reading books on the topic, and plenty of YouTube videos.

I’m hardly an expert, but I’ve tapped into the basics (pun intended).

Both red and sugar maples can be tapped for their sap. The latter is prized, as sugar maples have a higher concentration of sugar. I lack sugar maples, so I use the next best thing. Perhaps a maple syrup connoisseur could taste the difference between the species, but I cannot. Red maples are highly common, so you likely have one near where you’re reading this.

Getting started with maple sugaring is quite easy. Local hardware stores all carry the required equipment: buckets, spiles, and hooks. You’ll need a 7/16 drill bit to accommodate the typical spile (the tap inserted into the tree). Plastic milk jugs can serve as buckets for those looking to save a few dollars.

If you do decide to take up a new hobby during this pandemic winter, consider maple sugaring. You will be joining a tradition that extends back hundreds of years. Native Americans were tapping trees and making maple sugar long before the arrival of Europeans. Sap itself was consumed as a sweet treat on late winter days. By tapping your own trees, you will have a greater appreciation for the syrup that coats your pancakes and the maple trees that made it possible.