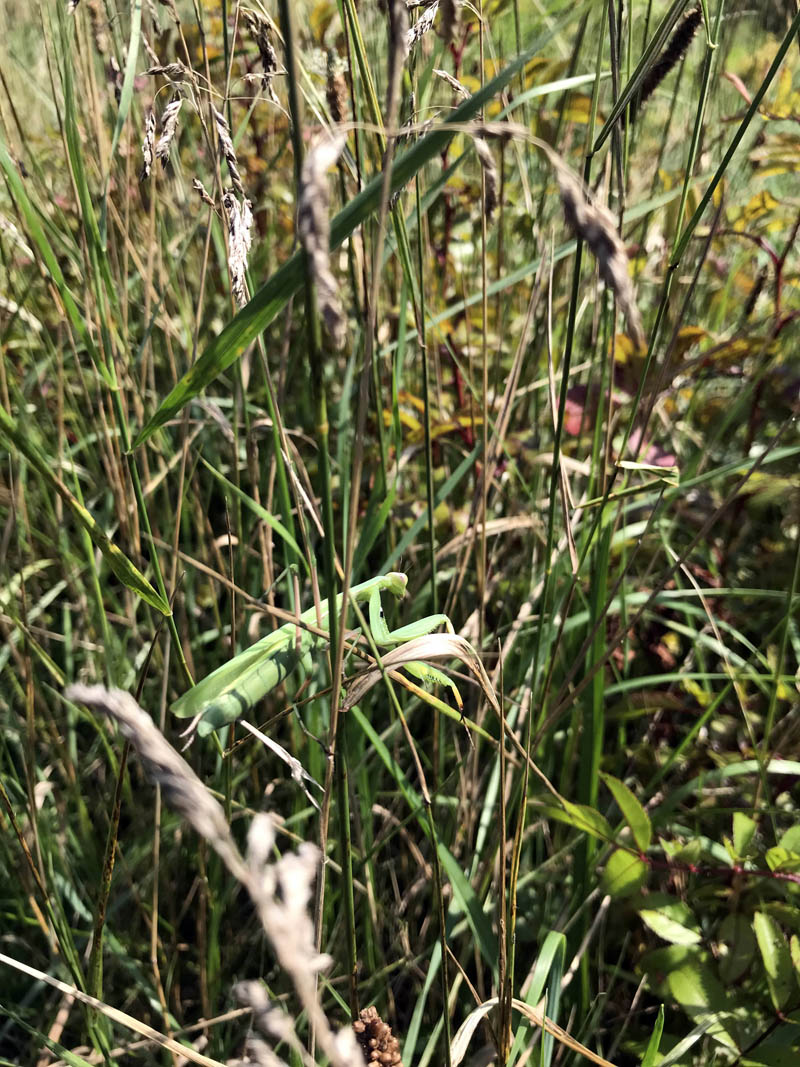 Earlier this year, I wrote what I believed was my last column for The Lincoln County News. After writing for nearly two years, I bade farewell to my readers and assumed that a door had firmly closed. However, after going three months without writing the column, I realized that I missed Backyard Wildlife. The door, as it turns out, was merely ajar. I’m pleased to say that I’m back and writing again. Like before, I welcome reader comments and feedback via the email account listed above.

During my hiatus, I wrote for other places. I also continued to observe the various creatures in my backyard and other areas. Last week, during the height of our unusually warm heat wave, a praying mantis caught my eye as it clung to some weeds in a Damariscotta parking lot. I don’t know how it wound up in such an inhospitable place. Cupping it with my hands, I walked over to a nearby field and released it there. It posed for a picture, but probably didn’t appreciate my rescue attempt.

Like many people, I falsely believed that the praying mantis was a protected species. It’s neither protected nor native to Maine. Introduced a century or so ago, it is a phenomenal predator. Well-concealed with its green color, a praying mantis will wait to ambush unsuspecting prey. With their voracious appetites, praying mantises are known to catch and eat spiders, insects, amphibians, and even smaller birds. The prayer pose which lends the species its name actually has nothing to do with peaceful reflection. In reality, the insect is simply waiting to kill and eat.

Praying mantises also have a gruesome mating ritual. During, or immediately after the act, the male’s head will be bitten off. This type of sexual cannibalism is commonly reported among some insects. Incredible eyesight and the ability to turn their heads 180 degrees also add to their ferocity. Perceived as beneficial, praying mantises prey upon both “good” and “bad” bugs. Human-assigned labels are highly subjective when it comes to the natural world.

You can find praying mantises in gardens, larger fields, and meadows. They also gravitate toward roadsides, open areas, and even parking lots. The warmer months are when they’re most active and offer the best opportunity to spot one in the wild. Keep an eye out, and you may just be rewarded with a sighting yourself.

Next week we’ll explore other predatory insects that inhabit Lincoln County. My father, a retired entomologist, will be lending some of his expertise.

Finally, a quick note on bird feeders. Despite the presence of a mystery disease affecting songbirds in the mid-Atlantic, it is not recommended that you take your feeders down in our area. It is, however, recommended that you regularly clean and disinfect your feeders. In addition, always use fresh seed and keep track of any unusual activity that should be reported to wildlife managers.

(Lee Emmons is a nature writer. He lives in Newcastle.)