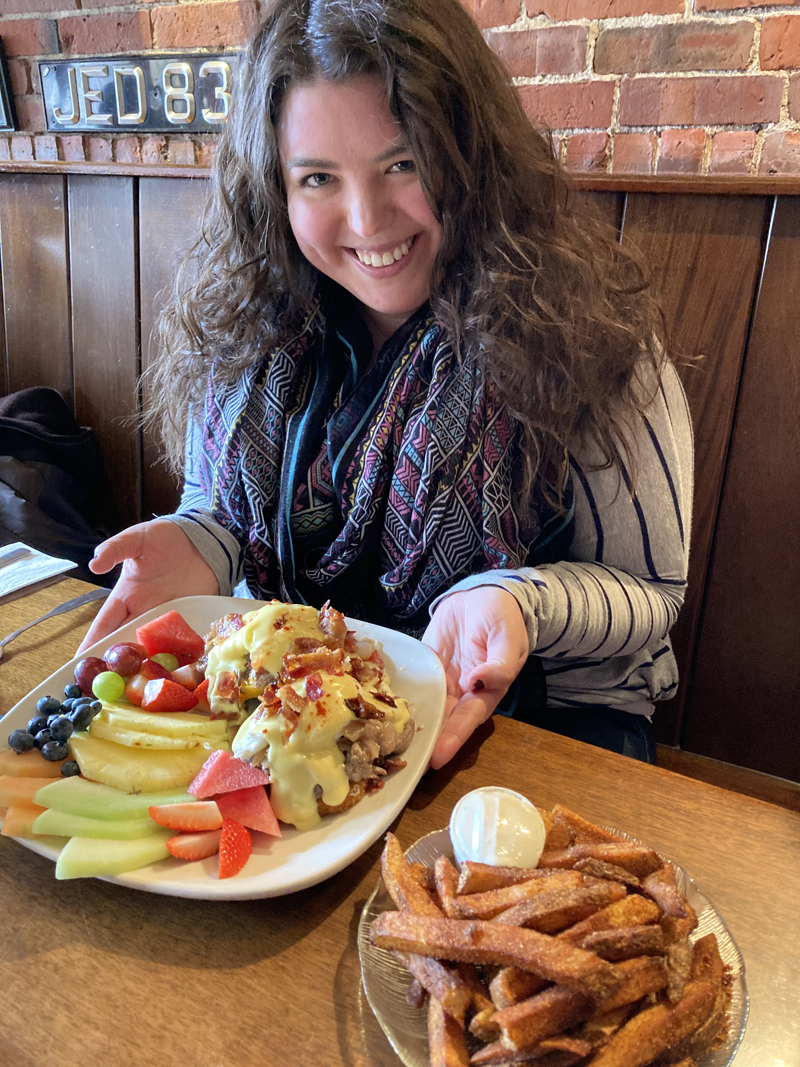 King Eider’s Pub co-owner Jed Weiss was kind enough to snap a photo of me with my breakfast. Note the French fries, which were not consumed during the course of the mammoth meal. (Photo courtesy Jed Weiss)

Back in February 2021 I sat down with King Eider’s Pub co-owners Todd Maurer and Jed Weiss to chit chat about the restaurant’s foray into brunch specials.

As always with the two of them, it was a great conversation. They were both incredibly enthusiastic about the creativity the initiative encouraged in the kitchen and the positive feedback from customers. I made a mental note to bop over the next time the crab cake Benedict was a special and went along my merry way.

Cut to a year later, and I still hadn’t made it to Eider’s on a Sunday morning. (I may love breakfast, but I love sleeping in more.) Thankfully, nothing is more motivating than a deadline, and with the next one looming for this column, I figured it was time to make the venture. I texted Jed to check if Benedicts were still a Sunday special and made a reservation after his confirmation. Jess Picard, a dear friend and former LCN reporter, joined me for the lunch.

Having been given the head’s up from Jed that the special was a prime rib Benedict, my decision was made before arrival. Jess ordered her usual, a BLT wrap.

In a clutch last-minute decision, we added a small order of the pub’s barbecue-dusted fries. I figured it’d be a good addition, not only because the fries are delicious, but also because the Benedict dish did not have a side of home fries.

It turns out there’s a reason for that.

When our server set our plates down in front of us, I immediately questioned whether I would be able to finish the entire dish, let along my half of the French fries. Sliced prime rib, peppers, onions, American cheese, and poached eggs towered on a foundation of potato pancakes. (Eider’s swaps the traditional English muffin for the potato pancakes to make the entire dish gluten-free.)

Hollandaise coated the dish, a perfect ratio of sauce to ingredients. (There is nothing worse than running out of hollandaise mid-dish.) The whole thing was finished off with sprinkles of bacon.

I got two-thirds of the way through the Benedict before I admitted defeat. The dish was incredibly delicious and filling, and I would like to shake the hand of whoever in the kitchen is responsible for the hollandaise sauce. The only thing I ate the rest of the day were the fries, which I ended up taking home, as all my attention had been focused on not leaving any of the poached eggs behind. 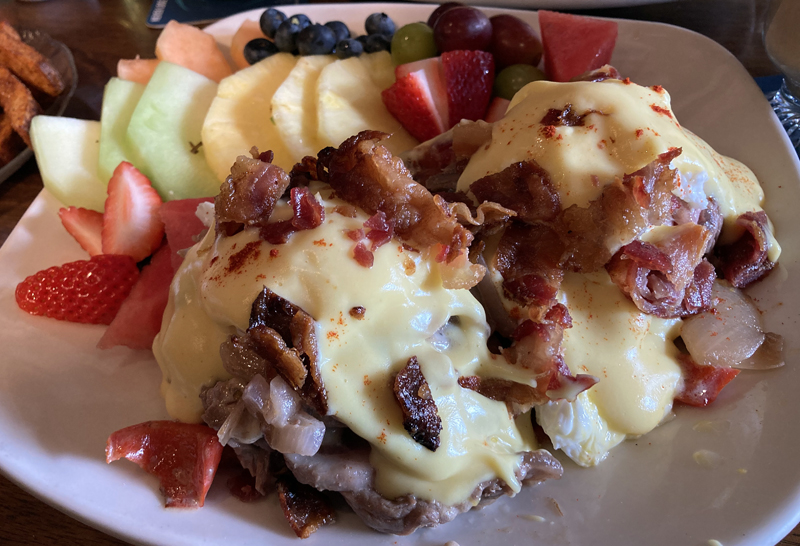 It’s worth a breeze through King Eider’s Instagram page to see some of its previous Benedict specials and appreciate the kitchen’s creativity. My personal favorite is the lobster Benedict, however others might be enticed by the cordon bleu Benedict, with grilled chicken, prosciutto, and Swiss cheese, or the Damariscotta dip Benedict, which features smoked roast beef and caramelized onion.

I cannot say definitively that King Eider’s has the best eggs Benedict, but the rest of Lincoln County has its work cut out for it.

Bottom line: If there’s a Benedict special at King Eider’s on a Sunday morning, I’ll meet you at the pub.

King Eider’s Pub is located at 2 Elm St. in Damariscotta. For more information, call the pub at 563-6008, go to kingeiderspub.com, or find the restaurant on Facebook and Instagram.

(Maia Zewert is looking for the best eggs Benedict and cup of coffee in Lincoln County. To make a suggestion, email her at mzewert@lcnme.com.)