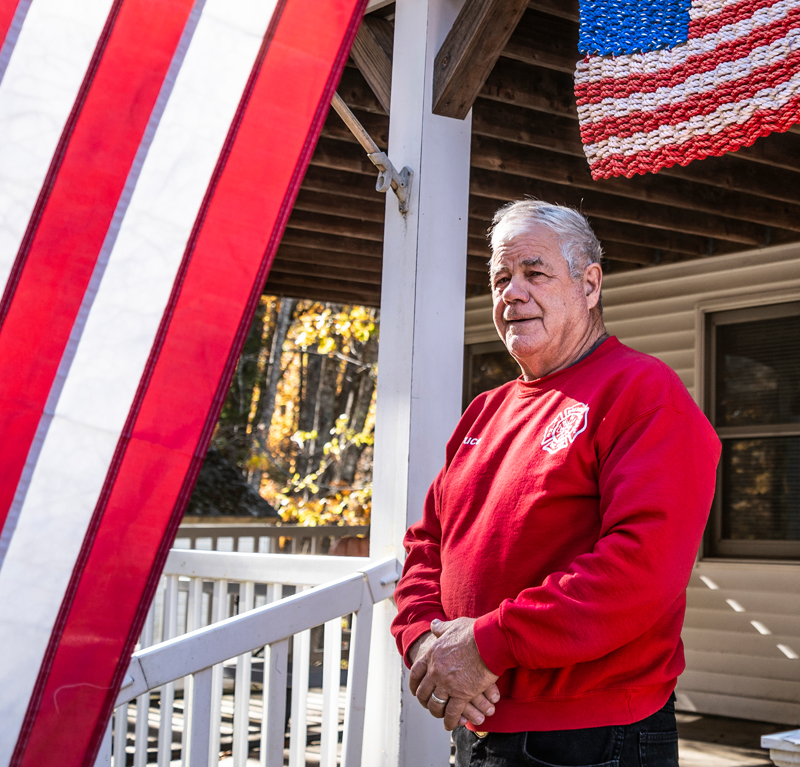 Bruce Poland stands outside his home in Bremen on Nov. 5. Poland served in Vietnam and is the commander of American Legion Post 42 in Damariscotta. (Bisi Cameron Yee photo)

It is not uncommon for military veterans to be reticent to talk about their time in the service and Bruce Poland is no exception. But he does have a message he wants to convey to younger vets: The importance of service, not just to the military, but to the community.

Poland was born in Bremen in 1949 and was raised there, one of an extended family of fishermen and boat builders. He said it was tough growing up; there wasn’t a lot of money and hard work was the key to survival.

“We managed,” he said. “We cut wood and worked the gardens for the winter so the whole family could eat.”

Poland attended the Bremen grade school and high school, but was drafted into the U.S. Army before he could graduate.

He served in the army from 1969 to 1971. He was sent to New Jersey for basic and then to Oklahoma for on-the-job training as a locomotive mechanic before being transferred to an artillery unit as a truck driver hauling ammunition in Vietnam.

Poland doesn’t often talk about his time in Vietnam, but that doesn’t mean he’s not proud of his service.

Despite coming from a family with a history of military service, Poland doesn’t know if he would have joined if he wasn’t drafted. But the draft was a defining moment in his life. And he is very clear about how much he values the time he served.

When he returned home, Poland took advantage of the GI Bill to earn his high school diploma, and settled back in Bremen where he followed in the family tradition of lobstering. Thanks to that diploma, he also landed a job as an electrician at the Bath Iron Works and was employed there for 18 years, always lobstering on the side.

After he left the army, Poland joined the Army National Guard, a branch of the military that emphasizes both service to country and service to community. He traveled to Italy and to Canada working on projects and was always prepared to serve if the guard should be called up.

Poland’s commitment to the ideals of community service fostered by his military service along with his innate desire to help people prompted him to volunteer with the Bremen Fire Department. He has spent more than 40 years responding to emergencies and structure fires in Bremen and to requests for mutual aid from the larger community of Lincoln County.

As the assistant chief, Poland knows firsthand the struggle to fill the department’s roster with enough volunteers to handle the need. He said the mutual aid program is essential now “because there aren’t enough people. No one wants to get involved… We’ve been trying to change that for years.”

That’s not the only organization Poland has been trying to change.  As the commander of American Legion Post 42 in Damariscotta, service to country, service to community and service to fellow veterans are guiding principles in how Poland lives his life.

It is his mission to foster those ideals within the ranks of Maine’s veteran population, from every branch and every generation, from those who fought in wars to those who served in peace.

Poland’s father was a veteran of World War II, a tail gunner on a B-52 bomber in Normandy. All of Poland’s uncles were also veterans. And it was his Uncle Forrest, a veteran of Korea who introduced Poland to the American Legion. Poland has been a member for more than 25 years, and post commander for the last five.

The American Legion was founded in 1919 by veterans returning from World War I. They saw the need in their communities and took action.

The preamble to the American Legion constitution states its purpose:  “To enhance the well-being of America’s veterans, their families, our military, and our communities by our devotion to mutual helpfulness.”

And Poland is looking forward to a partnership with the Boy Scouts, removing the flags from graves after Veterans Day. He sees it as a way to involve kids in community service at a young age.

The Legion is also dedicated to honoring those who came before by ensuring that those who served in America’s armed forces are never forgotten.

Post 42 supports the Togus Veterans Administration Medical Center.  It assists families with military funerals. And it provides a space for veterans to gather, to talk about their time in the military with others who understand the intensity of service in defense of America, and its lasting impact on their lives.

Poland thinks that the reluctance of servicemen and women to talk about their time in the military is common. When they do talk, it is usually to others who have served, who have that commonality of experience and understanding. That’s how much of the history is preserved – orally, through conversations between older soldiers and younger ones, whether they served in the same war or not.

That’s one reason why younger members are so critical to organizations like the American Legion. So the stories are told, the lessons passed on. So the sacrifices aren’t forgotten.

Poland said World War II veterans and Korean veterans were a driving force in the growth of the Legion in Damariscotta, but membership is declining. There were approximately 240 members last year, according to Poland. And now there are about 200.

“I’ve been trying to get the younger veterans (from) Afghanistan and Iraq to get involved,” he said. “I don’t know why they won’t join… I’ve talked to them, I’ve called them. They say they don’t have time… (But) everybody has time. You don’t have to commit 24/7, 365 days a year. Just come and join and help…”

According to Poland, posts across Maine are struggling. He mentioned one Maine post that is down to only four members, three of them out of state.

“Most of the Legions in the state of Maine are going to be folding if they don’t get a lot of younger veterans in there,” he said.

Poland didn’t join the Legion himself until he was in his fifties. He said he didn’t join earlier because no one asked him to.

“If you don’t ask, why, they don’t have the opportunity to join,” he said of the younger veterans.