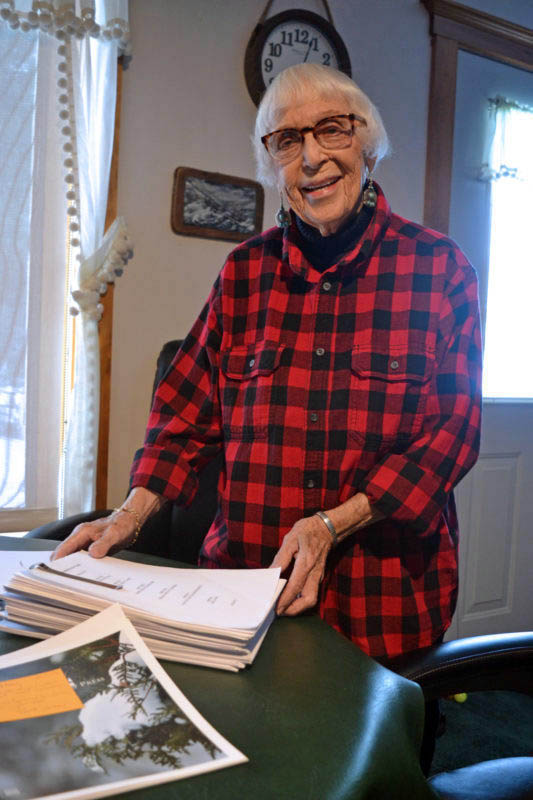 May Davidson decided at a very young age that she’d never live anywhere but Maine.

Davidson was born in Damariscotta in 1929 and fell in love with her home state quickly. Her mother, raised in a Scottish orphanage, and her father, born on a small Lithuanian farm, met in New York in the early 1920s. They moved to Maine together in 1927 and, for only $3,000, bought a seven-bedroom house in Bremen. They converted it into an inn and named it Mayfair House.

The Mayfair House is where Davidson grew up, learning to clean and wait tables for summer guests. In the winters, she would sometimes travel to New York and Connecticut with her parents while they worked as domestic servants, trying to make ends meet and continue living their dream life in Maine. Their hard work was an inspiration to Davidson, she said.

Davidson was sometimes lonely as a child as there were no neighbors around, but she developed a love for nature as a result. She spent as much time as she could outside, and learned about plants and animals.

“The woods and the shore were my playground,” Davidson said. “There was so much beauty there that it stayed with me all my life.”

She met a wide variety of people who came to stay at Mayfair House, but the most significant was 17-year-old Jim Davidson, a Staten Island native who spent a week at the inn with his mother. It was love at first sight.

He enlisted in the U.S. Army when he turned 18 a few months later and spent the next two years serving in World War II. He told Davidson he would come back for her and wrote to Davidson every day, and when he returned in 1947, the two got married at Mayfair House.

Davidson’s parents gifted the new couple 5 acres of land a half a mile away, and together, they built a log cabin.

“It was an adventure, all the way through,” Davidson said of their life together.

The couple’s goal all along was to do whatever it took to continue living in Maine. They tried as many moneymaking ideas as they could think of. They spent one winter in New York City, where Davidson worked as a typist and a secretary while her husband drove a truck carrying fuel for airplanes. There wasn’t enough work in Maine in the winter, so, just like her parents, she had to sacrifice some time in her beloved state to ensure that she could live there forever.

The couple bought a farm in Bristol in 1952 and entered into the broiler chicken industry two years later. They became contract chicken farmers, earning one cent per chicken each week from processing companies who would take the chicks back after 10 to 12 weeks.

The day their first round of 5,000 chicks arrived, Davidson gave birth to their first daughter, Connie.

After their second daughter, Debby Jo, was born in 1958, the couple needed a new form of income. They had been raising sheep and selling wool for a few years, but decided to increase their operation. The couple traveled to Canada to buy a flock of North Country Cheviot sheep, and their farm became the North Country Farm.

Over the years, the couple ran a sawmill and delivered firewood, sold lobster traps up and down the East Coast, and taught their daughters to take care of sheep and show them at fairs.

To Davidson, the most important part of their endeavors was that she and her husband did things together.

“We loved being together. We were married for a little over 68 years, and everything that we did was together,” Davidson said. “Whether it was shoveling manure, or showing sheep at the fairs, or going lobstering, or taking care of chickens, or driving a truck.”

In 1979, after their daughters had grown up, Davidson and her husband set out on a new adventure. They bought a truck and a refrigerated trailer, and for four years, drove the 60-foot truck from Maine to California and north to Montreal as independent truckers. They took turns driving on long, 18-hour days, and saw the country in a unique way.

“You don’t go into the tourist places,” Davidson said. “You’ve got 20 tons of product and 20 tons of truck and your time is limited.”

Every trip was different, and Davidson loved it. “I can’t explain how you could love a great big truck, but I did,” she said.

Trucking didn’t pay well enough, so after four years, they gave it up. In the 1980s, they took on yet another endeavor — making and selling bells.

North Country Wind Bells was born out of her husband’s love for making wind chimes, Davidson said. He began making the triangle-shaped bells out of sheets of steel, and the sound of the bells reminded him of the bells he heard out on the water as a lobsterman. Inspired, he started recording the sounds of bell buoys and gong buoys, and carefully cut the steel to replicate the sounds.

In the late 1980s or early 1990s, they started a Maine craft show in Portland, where L.L. Bean representatives placed an order for a few dozen bells. That purchase changed the Davidsons’ lives and greatly expanding their business.

In 2018, Davidson published her first book, “Whatever It Takes: Seven Decades of True Love, Hard Work, and No Regrets.” The book details her life, including 68 years of marriage. A second book, a collection of humorous true stories, is coming out this summer.

“If you have goals, it can be done. It can be hard work, but you can do it,” Davidson said.

She could always share the load with her husband, until his death in 2017.

“We did it together,” Davidson said. “We had tough times, but always we were sharing the tough times.”