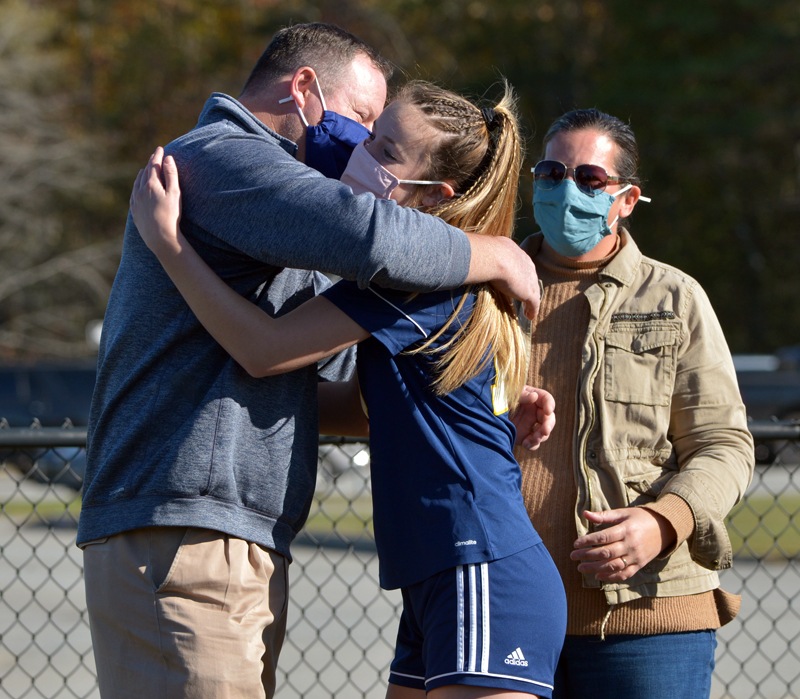 Abby Lash has been kicking a soccer ball since she could walk and shooting a basketball since she could get the ball to the rim. Now 17, the three-sport athlete at Medomak Valley High School has adapted as the COVID-19 pandemic has impacted her senior year.

“If there’s one thing I’ve learned this year, it’s to make the most of what you’ve got,” Lash, of Waldoboro, said.

In March 2020, Lash had finished her junior-year basketball season with the Panthers and was looking forward to playing with her travel team. The day they were supposed to leave for her favorite tournament, the event was canceled due to COVID-19.

“Then one thing after another started to shut down,” Lash said. “I did not think that was going to be the last day I walked the hallways.”

As MVHS closed and her classes went virtual, Lash’s drive to learn kept her motivated, even with a change in spring grades. Instead of the regular grading scale, students earned a designation of passing with distinction, passing, or not passing.

“Grades are so important to me … so that was one of the hardest things for me to accept,” Lash said. “I worked hard to get all my work in, and in the end I got passing with distinction in all of my classes.”

Lash also observed the challenges the pandemic created for educators. Her father, Matt, is the athletic director at MVHS, while her mother, Betsy, teaches at Miller School. 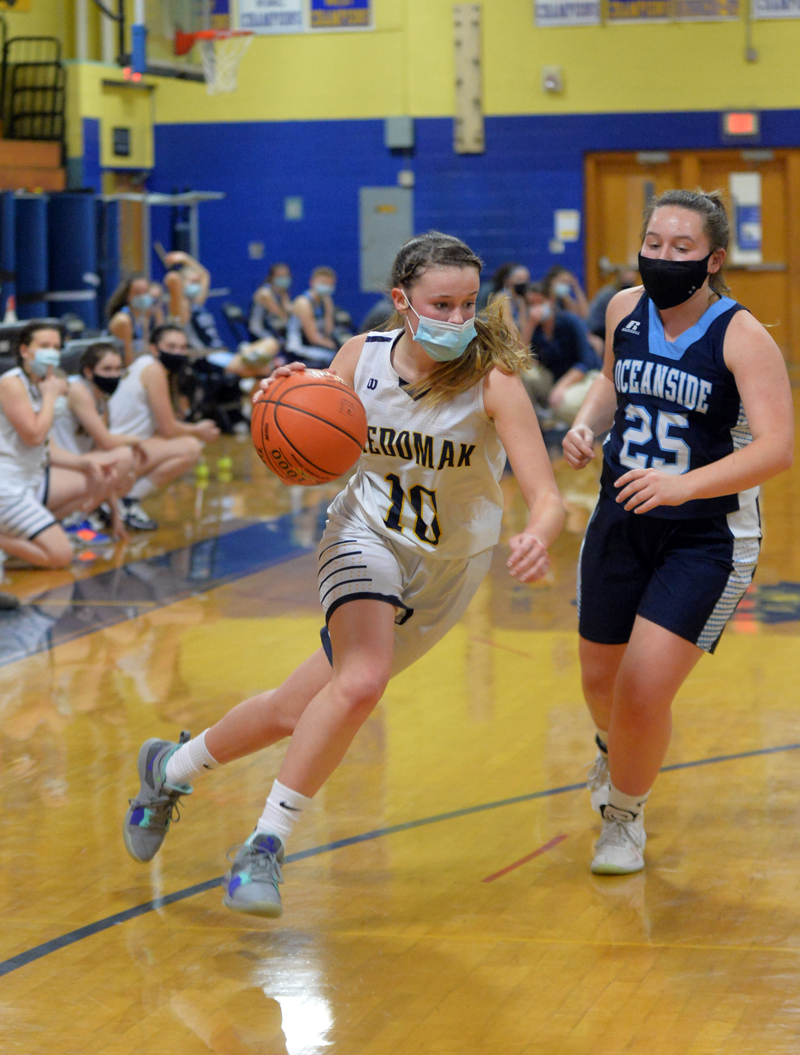 While the summer gave Lash time to process the fact that her senior year was not going to be what she had expected, the return of soccer in the fall restored some normalcy to her life. A four-year varsity player, Lash, a midfielder, was named to the Maine Soccer Coaches South Class B team for 2020.

Although the season ended prematurely, Lash considered herself blessed to play the five games she did with her teammates.

The season also afforded Lash the opportunity to thank her parents for their support.

“They were in a tough position this fall with everything that was happening and decisions that needed to be made, so to give them that hug on senior night and say thank you meant a lot,” Lash said. “It was so meaningful to hand my dad the rose he’s been handing to athletes over my lifetime.”

After a month and a half without school sports to keep her busy, Lash said she was grateful for the start of basketball season. She has played varsity all four years and is one of only two seniors on the squad, along with Emma Kunesh.

“Emma is one of my best friends, so it’s been great to have her on my side and navigating the process of playing during the pandemic,” Lash said.

The Maine Principals’ Association made several changes to the basketball season due to the pandemic, including replacing the jump ball with a coin toss and barring fans from games.

While face masks were not required during fall sports, they are now mandatory. Lash said the mandate was hard to adjust to at first, as she has exercise-induced asthma.

“I slowly got into things and now I don’t even realize it’s there,” she said.

With no tournament this year, Lash stays motivated for her teammates and the chance to beat local rivals like Lincoln Academy.

“I’ve always been a competitive person, so it’s in my blood to play to win,” Lash said. “I’m still playing for something. I’m playing to beat the rivals I’ve had since elementary school travel team. I’m playing for Emma and all the younger girls who are going to have a season next year.”

Lash hopes to see the return of spring sports, not only so she can compete in track events like the triple jump and relays, but also for her friends who play softball.

Beyond athletics, Lash said she is focusing on the positives of her senior year, including taking a class taught by her grandfather, Neil Lash.

“It’s just been really special,” Lash said. “I was definitely looking forward to being in school with Gramps because he was such an important part of my life and has taught me so much. If I grow up to be half the person he is, I would be honored.”

MVHS is set to return to in-person instruction at the beginning of February after months of remote learning.

“I miss my classmates, because the senior class is just so close-knit. I’m really hoping we get to go back, because I want to walk the halls again and sit through 80-minute classes that I dread,” Lash said. “I’m looking forward to getting my diploma. … I can’t even put it into words.”

Lash hopes to play soccer in college and study elementary education. She has not yet chosen a school. 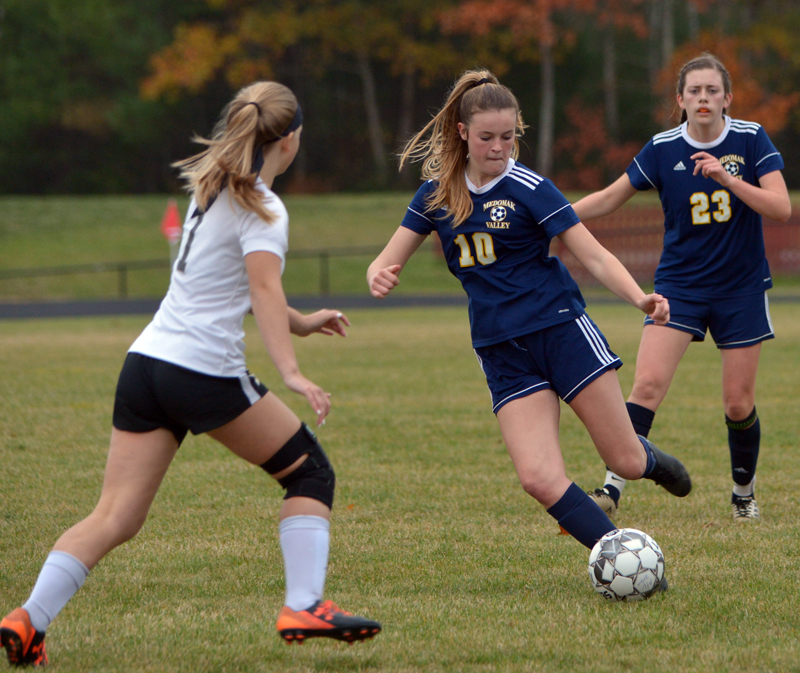 In addition to becoming more independent, Lash has grown closer with her family throughout the pandemic, particularly her younger brother, Gabe.

“He’s challenged me a lot, but our relationship has definitely grown, and with college coming, I’m so grateful I was stuck at home with him for the amount of time I have been,” Lash said.

Despite the challenges of the past year, Lash appreciates the lessons she has learned.

“As much as this has been a hard time, I have learned so much about myself,” Lash said. “I’ve grown as a person and matured through the decisions I’ve made and the challenges I’ve come across. I was not a flexible person, but now I feel like if something gets in my way, I can accept it and get through it.”