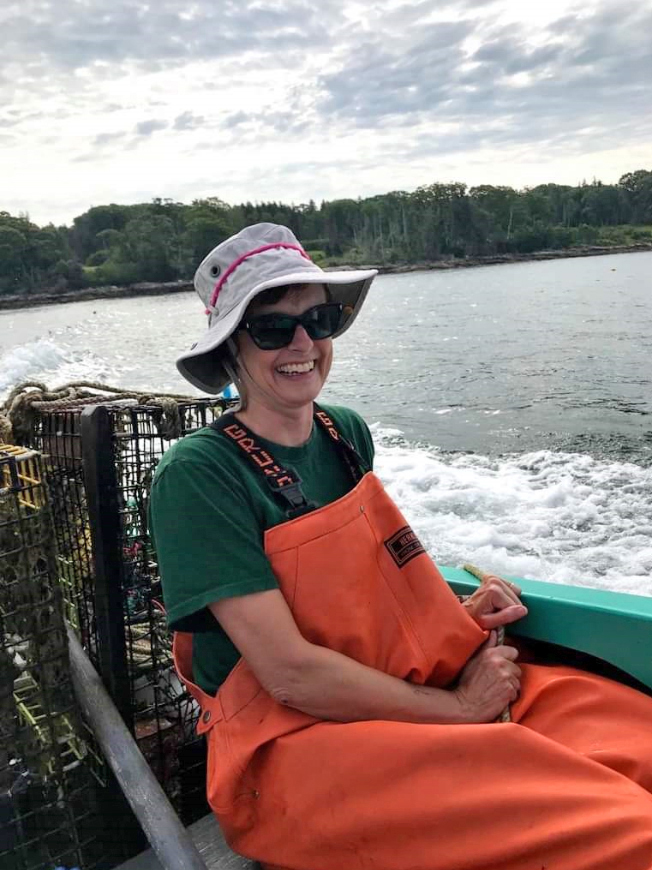 While a professional ballerina dancing in Germany, Kristin Kentopp never expected to become a doctor to U.S. veterans and a recreational lobsterwoman in Maine.

Kentopp, of Bristol, has not had a conventional life. Born in New York City, she spent her early years living in New Jersey, where her father worked for the Boy Scouts of America.

At the age of 5 or 6, she was scouted on the street by a ballet teacher who thought her legs and arched feet were perfect for dancing. She started lessons soon after, but didn’t stay in New Jersey for long.

When Kentopp was 8, in the late 1960s, her father was offered a job at the world Scouting headquarters in Geneva, Switzerland, and the family left the States.

The move was supposed to be temporary, only a few years, but the family knew early on it would be permanent. “My mother wanted to stay in Switzerland the second she set foot on Swiss soil,” Kentopp said.

The Swiss school system is rigorous, and provided Kentopp and her brother and sister with a strong education. As a student in Switzerland, Kentopp was required to become fluent in at least two of the country’s official languages — French, German, Italian, and Romansch.

Her education was in French. She studied German too, and could speak three languages fluently by graduation at 19. She also studied ancient Greek and Latin.

Though she came out of school well educated, she was burnt out from the intensity. Kentopp had continued dancing, but veered off the professional track early on.

She wanted to focus on her education and her mother intervened to protect her feet — Kentopp’s teachers wanted to train her in pointe technique, where a dancer’s body weight is supported on the tips of their toes, and pointe training too young can permanently disfigure a dancer’s feet.

She still danced though, and after graduation, Kentopp moved to Germany, where she landed a job dancing at the Darmstadt State Theatre.

“So many little girls want to be ballerinas, and it usually doesn’t happen,” Kentopp said. “I was very lucky.”

She danced in Germany for about five years. Ballet is not forgiving on the body, however, and by 25, Kentopp needed surgery on her knees. A friend in Germany recommended a doctor in Portland, Maine, and Kentopp returned to America.

German doctors were not sure how to approach her knee injuries, she said, but in Portland, they had more ideas.

During her recovery, she realized that she wouldn’t return to dancing the way she did before. Instead, she thought, maybe she could become a massage therapist or physical therapist, helping dancers like herself.

“I figured I had to recycle myself as something after dance,” Kentopp said. “I thought maybe I could be a doctor for dancers.”

She took classes at the University of Southern Maine and started down the path of medicine. She studied biology and biochemistry, and graduated from USM in just three years.

She began medical school at Tufts at the age of 30, in 1990. She did her three years of residency at Maine Medical Center in Portland. From there, she began a career at LincolnHealth’s Miles Campus in Damariscotta, where she stayed for 17 years.

In 2014, Kentopp left Miles and started working at Togus, the U.S. Department of Veterans Affairs hospital in Augusta, at the encouragement of a friend who worked there.

The transition wasn’t entirely natural for her. “As a kid, I was very anti-military, anti-Army, very socially oriented,” Kentopp said. “I also felt very Swiss; I didn’t feel American at all.”

Many of her family members had served in the U.S. military, though, and she took the opportunity at Togus as her chance to serve the country.

Kentopp had a busy life already, but about four years ago, she took on a new, unexpected hobby — recreational lobstering.

“When I was first moved to Maine, it was ‘Blueberries for Sal’ and ‘One Morning in Maine.’ It wasn’t a real place, it was the books my mom had read to me,” Kentopp said. Lobstering has given her that quintessential Maine experience, like she read about in books.

In 2010, she flew her mother out from Switzerland to move in with her in Bristol so she could help take care of her. One of her mother’s caretakers had a boyfriend who lobstered recreationally, and Kentopp started to learn about it.

A recreational lobster fishing license allows a person to submerge five traps at a time, and a boat can only have 10 noncommercial trap tags. Additionally, only the license holder can haul traps, band lobsters, or do any other work related to lobstering, so Kentopp started off as just a passenger.

“As my mother got more frail and all I was doing was working and taking care of her, I just loved being out on boats and they would let me join them,” Kentopp said. “I’d go out with them on the weekends and take a million pictures.”

Eventually, her mother’s caretaker stepped aside and Kentopp took her place. Kentopp and Dickie Burns, the caretaker’s boyfriend and Kentopp’s new lobstering companion, bought a boat together and named it the Nita Lynelle, after Kentopp’s mother.

“It’s really Dickie’s boat, but we pretend it’s part mine,” she said. “He does all the work on it and I just provide the financial end.”

Since she started lobstering, she has learned things she never thought she would. She knows how to determine the sex of a lobster and whether it’s already been caught, and she knows how to take them out of the trap and band them.

“It’s not a competition, but we do keep track of who gets how many,” Kentopp said. Every summer, Burns catches more than she does.

A recreational license does not authorize a person to sell lobsters, so when she catches them, she has to either eat them or give them away. In a typical summer, she prefers to have friends over to her house so they can all eat lobster together.

She can’t wait to get back on her boat next summer.