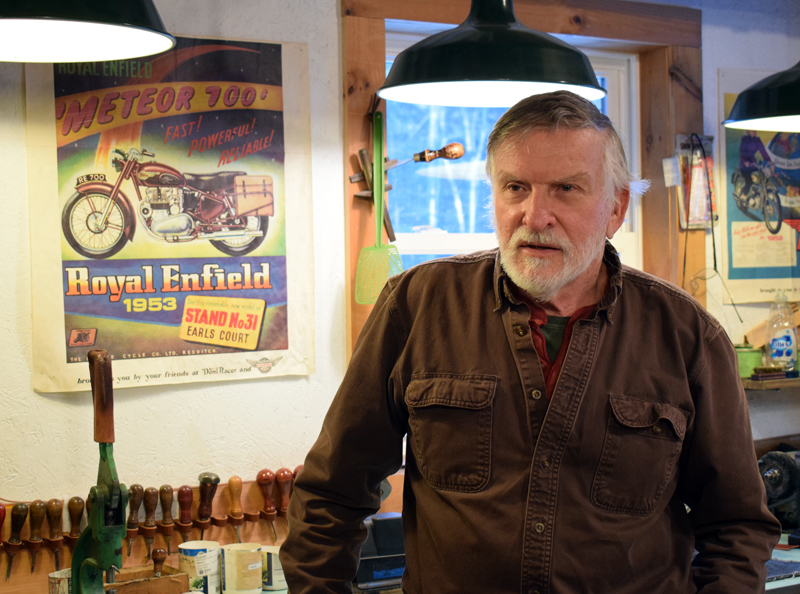 Narragansett Leathers owner Alan McKinnon stands in his home workshop in Newcastle on Jan. 7. A motorcycle enthusiast, he owns three of the machines and rides nearly every day. (Evan Houk photo)

During the March on the Pentagon on Oct. 21, 1967, Alan McKinnon found himself in a difficult position. At the time, he was working for the U.S. Department of Defense while marching, along with about 50,000 other people, across Washington, D.C. to the Pentagon in an effort to end the Vietnam War.

“I was in the March on the Pentagon with a Pentagon pass in my pocket. So, if I ever got arrested for being in the demonstration, I would have been fired too,” McKinnon said with a laugh during a Jan. 7 interview.

The 79-year-old Newcastle resident’s life has had this independent streak running through it, whether he is making fine leather goods, riding his motorcycle across the American continents, sailing in the Caribbean, or skiing at Saddleback Ski Mountain.

“I guess in life, the most important things are family, the leather business, and then motorcycling, in that order,” McKinnon said.

After majoring in geography at the University of Rhode Island, McKinnon moved to Washington, D.C. in 1965 to work for the Department of Defense as a research specialist.

In an attempt to become self-sufficient, he learned how to handcraft leather goods from a friend back in Rhode Island.

“It just blew me away that you could make something yourself and go out into the world and sell it, and survive and live off that,” McKinnon said.

He opened his own shop in Washington, D.C. in 1969 and sold leather goods to local boutiques for seven years while continuing to work for the federal government.

“It was the beginning of the hippy-dippy days and anything that somebody made, the public would buy,” McKinnon said.

Eventually, “fed up with the bureaucratic nonsense,” McKinnon decided to move back to New England with his wife, but found Rhode Island too developed for his liking.

“We looked at Rhode Island and while we were away, somebody paved it over,” McKinnon said.

Using his geographic mind, McKinnon drew a three-hour ring around Boston, where he could source quality leather. Newcastle, Maine was within the three-hour ring and would allow him to make day trips to the city to pick up supplies.

He also said that Maine turned out to be a great place to raise his two daughters.

“It’s a great place to raise a family. I love the change of seasons. I love the sophistication of coastal rural,” McKinnon said.

Through help from his friend and lots of trial and error, McKinnon developed his skills and opened Narragansett Leathers, eventually settling into the Old Metcalf Livery Stable building at 49 Main St. in Damariscotta. 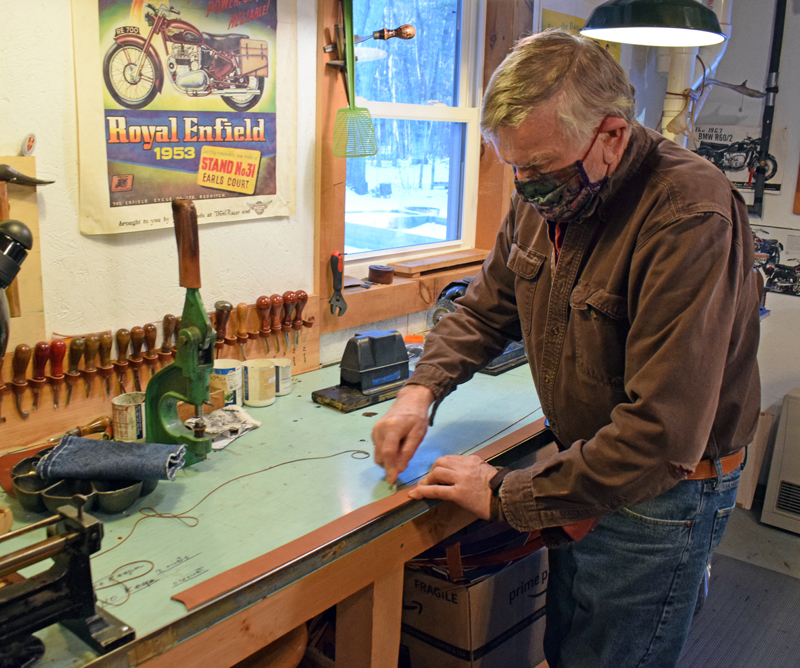 McKinnon said most of his early orders came back and he had to remake them, similar to what happened to L.L. Bean when he first started out.

“His first 100 pairs of boots, 90 of them came back. And he made them all over again and learned from his mistakes,” McKinnon said.

Today, he still fills online orders for leather belts and bags from his home workshop in Newcastle.

McKinnon said he recently received an email from someone who bought a belt from his shop 25 years ago and wanted a new one. McKinnon told him to send him the old belt so he could use the old buckles for the new belt.

He said the secret to a quality and long-lasting leather product is the quality of the leather, something he has studied and perfected throughout his career.

McKinnon’s preferred method of transportation has been by motorcycle since he was 18. He owns three and has ridden nearly every day for 61 years in all types of weather. He said motorcycles are more fun to drive and easier to park pretty much anywhere.

One of his motorcycles is a BMW touring cycle and he is a member of the Great Northern BMW Riders. He pens the newsletters for the group and helps with ride planning.

“People see me carrying all sorts of things on a bike that you wouldn’t normally see,” McKinnon said, including skis.

McKinnon said he has traveled to 47 of the 50 U.S. states, all the Canadian provinces, and all the way down to the Panama Canal on a motorcycle.

Nearly every year since he started skiing when he was 45, he has taken his motorcycle and skis to the slopes. He missed one year, in the winter of 2013, when he had both knees replaced.

McKinnon has a season pass to the Camden Snow Bowl and plans to visit Saddleback Ski Mountain this year.

McKinnon has also been involved in local government, serving on the Newcastle Board of Appeals, the Damariscotta-Newcastle Harbor Committee, and, now, the Damariscotta Waterfront Committee, which is developing a plan to protect the downtown from rising sea levels associated with climate change.

He was also involved in the Our Town Damariscotta effort that passed a 35,000-square-foot retail size cap in 2006, blocking the construction of a Walmart on Route 1. The land is now part of an organic farm.

“One Walmart, but what follows Walmart? Tractor Supply, Applebee’s,” McKinnon said, noting that the construction of a Walmart would have changed the landscape of the Twin Villages.

McKinnon loves the outdoors, saying he has visited nearly every nature preserve in Lincoln County since the beginning of the COVID-19 pandemic.

He considers Maine home and will continue practicing his craft, making leather goods in Newcastle, while still finding plenty of time for motorcycle riding, sailing, and skiing.