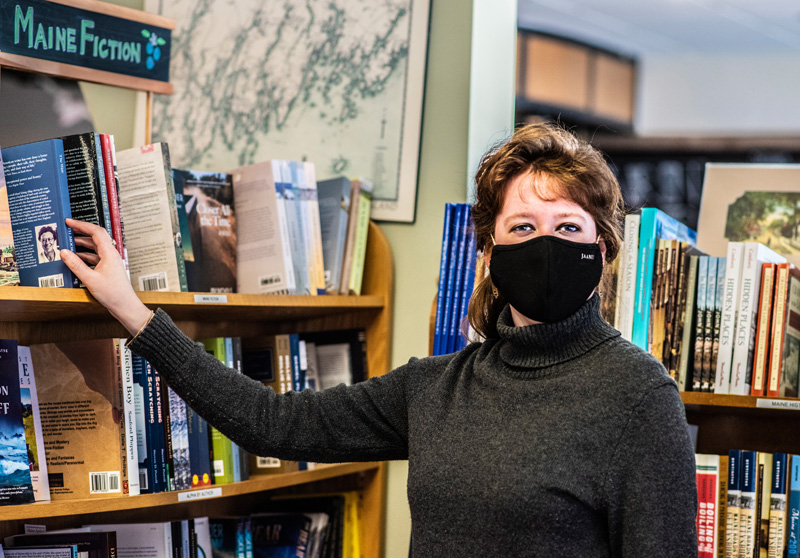 Chloe Deblois adjusts the placement of a book at Sherman’s Maine Coast Book Shop in Damariscotta on Sunday, Feb. 21. Deblois has worked for the store for 12 years and managed it for the last five. (Bisi Cameron Yee photo)

“Life is too short to read an uninteresting book,” Chloe Deblois said.

Deblois loves to talk about books. She loves to make recommendations, to hear what other people are reading. She loves her co-workers and her job as manager at Sherman’s Maine Coast Book Shop in Damariscotta. She loves being part of the fabric of Damariscotta’s Main Street.

To Deblois, Main Street feels like the hub of Lincoln County — a central core that radiates out to the surrounding towns. But the reverse is also true — those same towns flow back into the Main Street community, bringing her the customer interactions that are the best part of her day.

“I love being in this part of Maine — such a diverse, varied, supportive, interesting community. So many readers and critical thinkers. It’s nice to be in a bookstore surrounded by people reading deeply,” she said.

Deblois’ family is from Newcastle and she considers herself “very homegrown.” She experienced a great sense of continuity in her education — from Great Salt Bay Community School in Damariscotta to Newcastle’s Lincoln Academy.

She chose St. Anselm in Manchester, N.H. for college. “It was a great fit for me — classically academically oriented,” she said. Deblois was initially undecided as to her course of study there. The school encouraged sampling a variety of things.

After taking “a great humanities course of lectures and small seminars,” Deblois chose philosophy as her major. She said she was good at questioning everything, including herself.

“It’s a very different mode of thinking than I was used to,” she said. “It includes history, science. It’s an eclectic course of study, a different approach to understanding the world. It promotes reflective thinking, pausing before you react.”

Deblois thought about going to law school, but decided to take a year off before continuing her education. She worked at a restaurant, but found she needed a full-time job. A friend told her the bookshop was hiring “and that was all she wrote.”

Deblois grew up with the Maine Coast Book Shop. “It was a fixture of my life since I was an infant,” she said. She started at ground level, checking out customers and doing inventory, but quickly sampled every job, from ordering to receiving to merchandising.

When the shop sold to Jeff Curtis, of Sherman’s bookstores, Deblois took over as manager. She enjoyed being part of the transition, going from one store to a family of stores, seeing everything evolve. She said she has learned to think more broadly about the book business. “There are so many different avenues and perspectives on what and how to sell,” she said.

Deblois admits to a particular fondness for the history section, driven by the trend toward “popular history with excellent scholarship for a general audience.” Currently she’s reading “Children of Ash and Elm: A History of the Vikings” by Neil Price: “gorgeously written, the insights are astonishing and profound.”

Deblois said that her most deeply felt childhood memories involve her family reading together. She recalls reading Roald Dahl with her two younger sisters because his irreverence “cracked us up,” and reveling in Chris Van Allsburg’s captivating artwork and language. She’s drawn to the children’s picture book section, always looking for the perfect way to show off the beautifully illustrated covers.

Deblois recently reread “Walk Two Moons” by Sharon Creech and was struck again by “how beautiful the story is” and how, as a kid, she missed so much of the power of the narrative.

She’s made a vow to read more fiction. “Interior Chinatown” by Charles Yu “reminded me how much I love reading novels.” “Spring Snow” by Yukio Mishima is “lyrical and unsettling, a beautiful story.”

Her book club recently read “The Great Gatsby.” “It’s fun sometimes to revisit stuff you didn’t have a taste for,” she said. She thinks she read it too young. “The idea of nostalgia and regret didn’t apply to a 15-year-old.”

But her very favorite book is “Moby Dick,” which she read of her own volition. She’s read it four times cover to cover and continues to dip into the world of Ahab and Ishmael regularly.

Deblois said she practically proselytizes about the book, asking customers to “give it a chance, don’t be scared.”

She loves Ishmael, calling him “sympathetic and self-effacing, aware of his flaws, and relatable. It’s a powerful story of a normal person caught in a situation that he was not ready for. The character of Ahab is a megalomaniacal figure, sinister but relevant,” she said.

She appreciates Melville’s unexpected commentary on America, on New England’s economic history, and on man’s relationship with nature. She enjoys his “sly humor” and his insights and observations about the ocean. She thinks “Moby Dick” is “a very New England book.”

Deblois finds it sad that Melville never saw the success of his magnum opus, never got to know how meaningful a work he had created. She takes comfort in the knowledge “that books can find a greater life and find the readers that love them,” although she admits she has not had a lot of success in converting non-New Englanders to “Moby Dick.”

The bookshop closed for two months because of COVID-19. They were nervous about reopening, unsure if the business would rebound.

Deblois said customers came in and asked how they were doing and she told them the store was doing well, that it was busy. But the customers weren’t asking after the store — they wanted to know that the booksellers were OK. “It was very meaningful,” Deblois said. “It made those uncertain times that much more encouraging.”

Deblois is optimistic about the future of her chosen industry. “Even though customers have become much more conversant with online ordering, they have also become much more aware of the need to support local businesses,” she said. “They recognize that bookstores are a vital part of the community and that one of the best ways to expand your horizons is to read a book.”