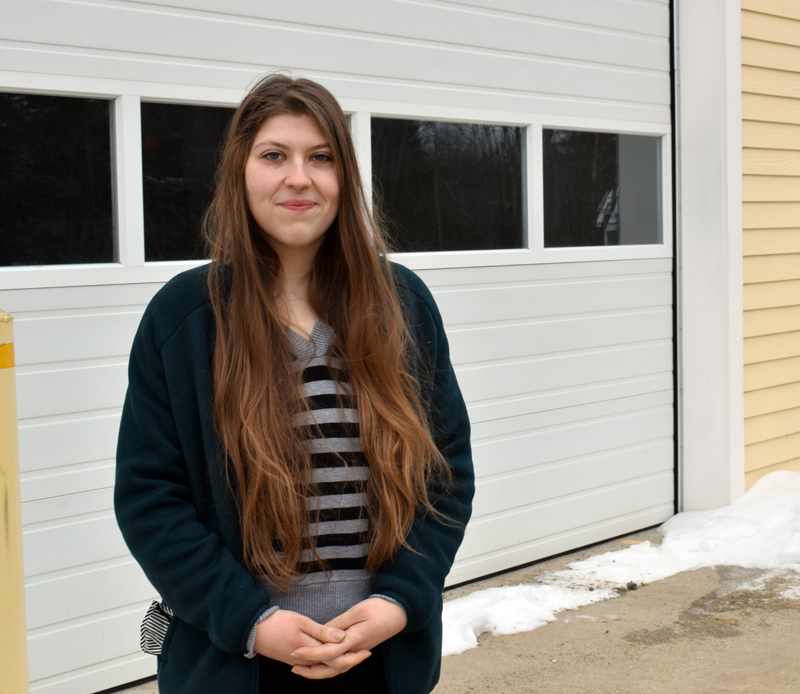 Sabrina Doray stands outside the Dresden Fire Department on Sunday, Feb. 14. Doray has been serving on the department since 2012, when she signed up on her 18th birthday. (Evan Houk photo)

Sabrina Doray’s heart never left her hometown of Dresden. Even after moving when she was young and attending high school in Richmond, Doray moved back across the bridge to her hometown after graduation and promptly joined the Dresden Fire Department on her 18th birthday.

“I knew it (was) something I wanted to do,” Doray said in an interview on Sunday, Feb. 14.

She said she would have joined even earlier as a junior firefighter, but waited until her 18th birthday at the behest of her mother.

Doray is following the path of several of her relatives in the Lilly family who currently serve the community on the volunteer fire department.

“I could see my uncle doing what he was doing from a really young age and it was really interesting,” Doray said.

Since Gorham, his brothers, and Steve started volunteering, stricter age restrictions have been set. The youngest someone can volunteer today is 14, and the state has strict rules for what these junior firefighters can do.

When Doray was very young, she didn’t understand why occasionally a large portion of the family would suddenly depart from family gatherings. “All of a sudden, you’d hear the tones go off and everyone would be up and leaving,” Doray said.

At around five years old, Doray came to understand the family tradition of serving in the Dresden Fire Department and would occasionally attend trainings.

Doray said that with a volunteer fire department, when a call comes through, “if you can go, go.”

Doray said that in her eight years on the department, she has probably been to hundreds of fires and is certified to do anything the department needs her to do.

While attending Southern Maine Community College with a focus on the arts and working full time, Doray also took classes in fire safety. After a year and a half of classes, Doray received both her Firefighter 1 and Firefighter 2 certificates from the National Fire Protection Association, qualifying her to perform any task at a fire scene.

Doray has also completed her emergency vehicle operator course, which allows her to drive fire trucks and ambulances.

As Dresden is a relatively small town, the fire department mostly responds for mutual aid calls to towns like Richmond, Wiscasset, and Randolph, Doray said. The department is well stocked with equipment for a small town, with brush trucks, a few engines, a tank truck, and now a ladder truck, she said.

“We have the things to assist the people around us,” Doray said.

The chance to help the local community and the family tradition drew Doray into the fire department and she has developed a profound respect for fire and its destructive force during her eight years of service.

“It’s awe-inspiring. You realize how destructive fire is,” Doray said.

Doray acknowledged that the firefighting field is still very male-dominated, but she doesn’t let it affect the way she fulfills her duties.

“I just carry myself as one of the guys because my gender shouldn’t affect my ability to do the job,” Doray said.

Doray said that the community is the most important thing to her at her current job at the Mid Coast Hospital Walk-In Clinic in Brunswick, where she has worked as a custodian since 2015.

“I like all the people I work with. I think it’s just the community things for me,” Doray said.

Due to the fact that she works at a healthcare facility, Doray has been offered the COVID-19 vaccine. She said she declined because she would like to see more research done first.

“That’s so quick,” Doray said of the development of the vaccine in less than one year.

Doray also took a stab at running in a four-way race for first selectman in last year’s municipal election to serve her community in another way.

“I think the only way to fix it is to just do it. So I tried to put my foot in the door a little and saw how that went,” Doray said.

John Rzasa won election with 150 votes and Doray received 82 votes. She said she is not sure yet if she will run again in the future.

When Doray moved back to Dresden after high school, she lived with her grandparents so she could save up money to buy a house that previously belonged to her great-grandfather. She completed the purchase last year and plans on staying put in her hometown.

“I could probably never live anywhere else,” Doray said, noting the beauty of the Maine landscape year round.

Eventually, Doray would like to make a career for herself as an artist. She said she has always been interested in drawing, painting, and sculpting since she was young.

“I just really like things that inspire me,” Doray said.

In her spare time, Doray enjoys being outdoors, hiking, gardening at her new house, and kayaking.