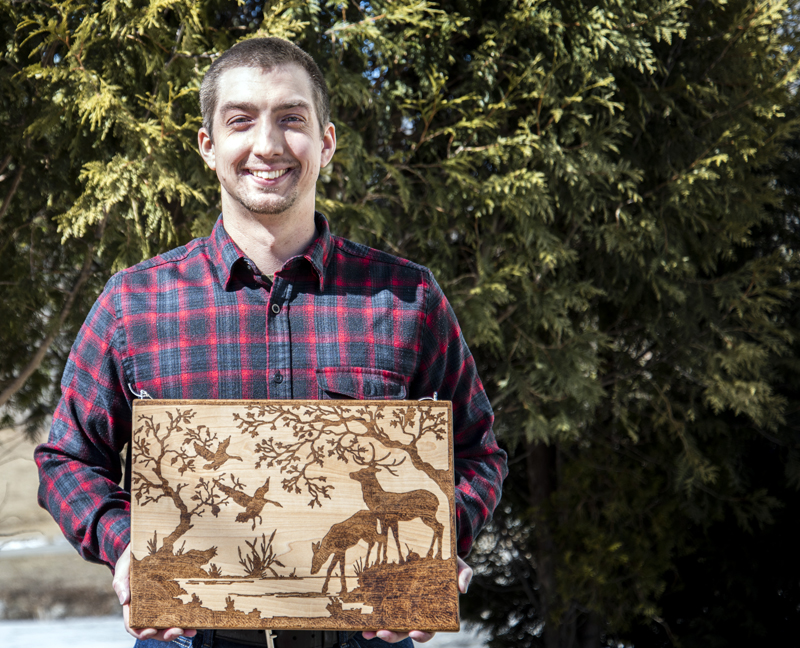 Tyler Richards displays an example of his woodburning technique on a cutting board in Damariscotta on Monday, March 8. Richards learned woodburning through trial and error and YouTube. (Bisi Cameron Yee photo)

There were only two rules Tyler Richards had to follow growing up on his father’s farm in Edgecomb: “Don’t get hurt, and be back by dinner.”

He remembers wandering the woods behind the property and building forts in the forest. He loved it then, and still loves it now.

Richards said that forest scenes are his inspiration for the woodburning designs he applies to cutting boards, rifle stocks, cribbage boards, coasters, and even a coffee table for his Facebook business Richmere Custom Creations.

Richards started woodburning around the time his son was born. “I bought some cheap wood and a woodburning kit and watched videos on YouTube,” Richards said. “The first few attempts were rough. But I got better.”

Richards began to sell his work for a little more than the cost of materials. “It was enough to put gas in the tank and buy a bit of groceries,” he said.

Richards said he uses stencils because “I cannot for the life of me draw freehand.” At first he used basswood, which is thin, soft, and burns easily. But he prefers maple, and uses that for most of his work.

“Woodburning started as a hobby and turned into something I can market. I can sit there for hours. It’s relaxing, I like seeing the progress,” Richards said.

Richards described himself as a history lover, fascinated by the military and the American West. One of his favorite movies is “Rio Bravo,” a 1959 Western starring John Wayne, Dean Martin, and Ricky Nelson. “I could watch it over and over and over again,” he said.

As a child, Richards collected military surplus like backpacks and uniforms. When he got older he collected firearms and participated in mid-range shooting competitions with an M1A rifle, which he described as “the civilian variant of the fully automatic M14.” 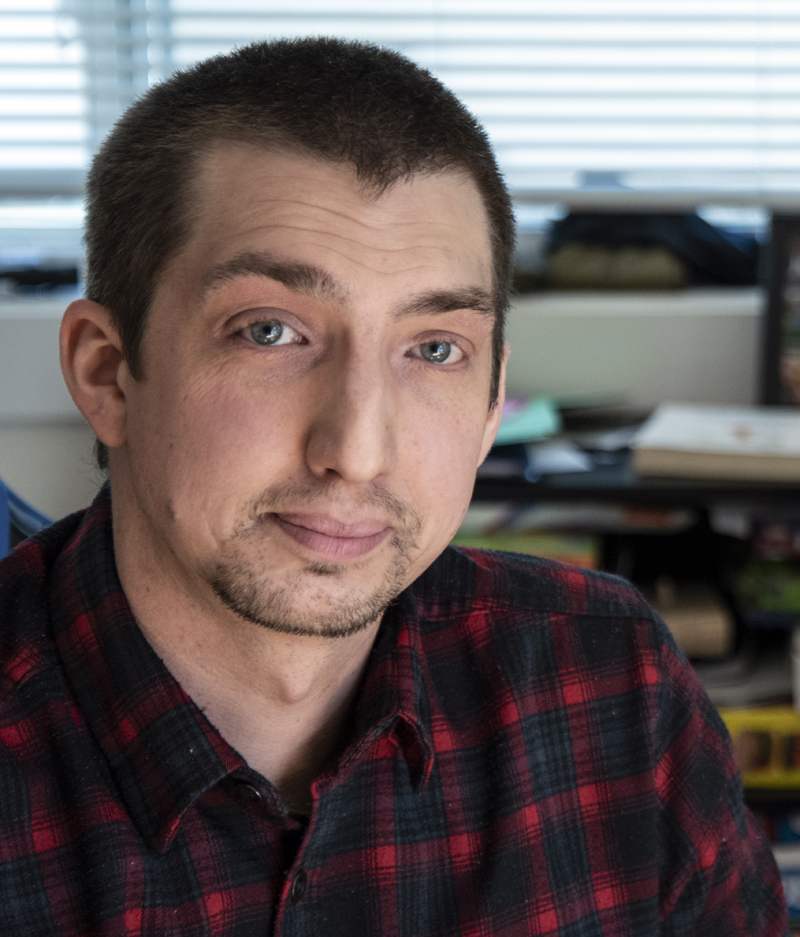 Tyler Richards poses for a photo at home in Damariscotta on Monday, March 8. Richards has post-traumatic stress disorder from his service in Afghanistan, but said he would serve again. (Bisi Cameron Yee photo)

Richards attended the Edgecomb Eddy School, went to middle school in Wiscasset, and then graduated from Lincoln Academy in 2006. He then joined the U.S. Army and went overseas to serve.

Richards comes from a long line of men and women who served their country, tracing his military roots on his father’s side back to the Chamberlain family. According to Richards, Joshua Chamberlain, who served at the battle of Gettysburg and went on to govern the state of Maine, was a great-great-great-uncle.

Richards enjoyed the army, including his last year in Afghanistan. He thought the country was beautiful and he appreciated the camaraderie he found among his fellow soldiers.

“Everybody was bored with nothing else to do in Afghanistan,” he said. “It was nice to go to the next tent over and find somebody to do something with — take a walk, go to the gym.”

“There was always someone to talk to if you had issues,” he said.

Despite the positive associations Richards had with his four years of service, there were challenges.

Richards drove a truck, running supplies, machinery and people along the hazardous roads. “There wasn’t a single day I didn’t get shot at. You would hear the ‘tink, tink, tink’ down the side of the truck. We turned it into a game — ‘ha, missed me!’” he said.

Richards said soldiers were often asked to help civilians on the road, which could sometimes be difficult due to the differing equipment.

“We would have to take all our gear off to fit under the trucks. We were completely exposed. We usually did that at night when it was harder to see that we were vulnerable,” said Richards “It was constant stress.”

“Sometimes we recovered blown-up vehicles, where we would pick up the mangled wreckage and realize that maybe those inside didn’t make it,” he said.

Richards left the army in 2012. While he said he’d probably do it again, he also said he has PTSD and tinnitus from his experience.

Richards maintains a friendship with four fellow soldiers through nightly video games. He’s only met one of them but all four had been stationed at Fort Drum in New York at different times. 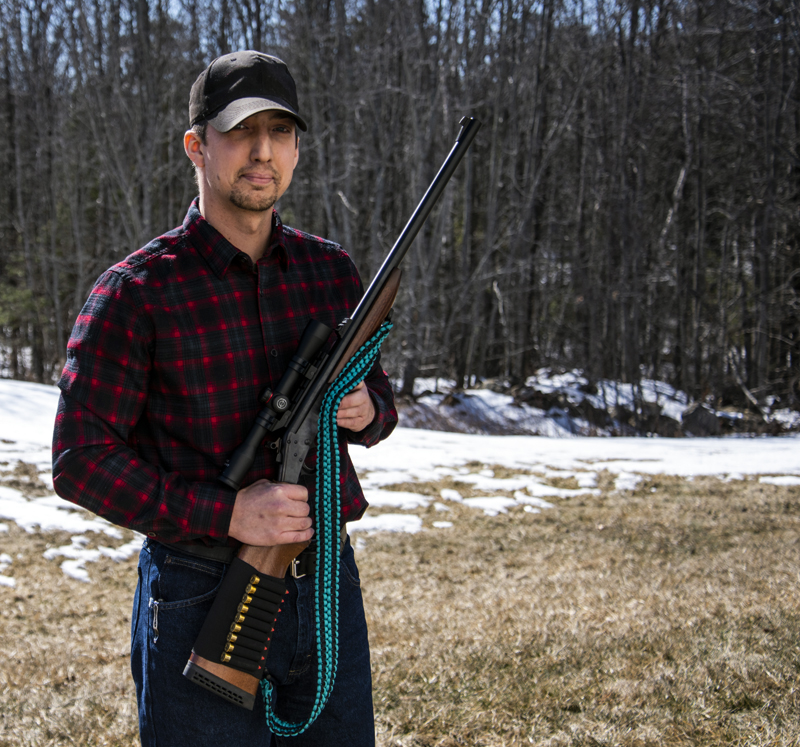 Tyler Richards demonstrates a rifle sling he crafted from paracord in Damariscotta on Monday, March 8. The sling uses over 100 feet of paracord and can be unbraided for use in a survival situation. (Bisi Cameron Yee photo)

They play Call of Duty because everyone has it, or World of Warships because it’s about the Navy or Red Dead Redemption, a Western-themed game with “a fantastic storyline.” Richards likes games that have a story. “It’s like taking an active part in a movie,” he said.

Richards is currently a stay-at-home dad, sharing joint custody with his ex-wife and slowly building up Richmere Custom Creations. Currently living in an apartment in Damariscotta, Richards looks forward to moving back to Edgecomb and plans to build a home there.

Richards said taking care of his son is the number one thing that keeps him going.

“If my boy needs me I need to take care of him,” he said.

Richards hasn’t been able to do much woodburning since he moved to Damariscotta where he no longer has access to a workroom.

“So I started working with paracord,” Richards said. “I needed a rifle sling and I wanted something unique but I didn’t want to go to the expense of buying it. So I found instructions online.”

“The best thing to have when you’re in trouble is cordage,” Richards said. “And that rifle sling is almost 100 feet of cord.” Richards has plans to make paracord dog leashes as well.

Richards said his father and grandfather were deputies with the Lincoln County Sheriff’s Office deputies and he hopes to follow that path too. He’s completed phase one classes online for law enforcement and gotten as far as phase two, but said “I definitely wasn’t ready for it.”

He said he will keep trying. “I want to show my son you can set goals and work towards them. And when I look in the mirror, I want to know I’ve given my best.”