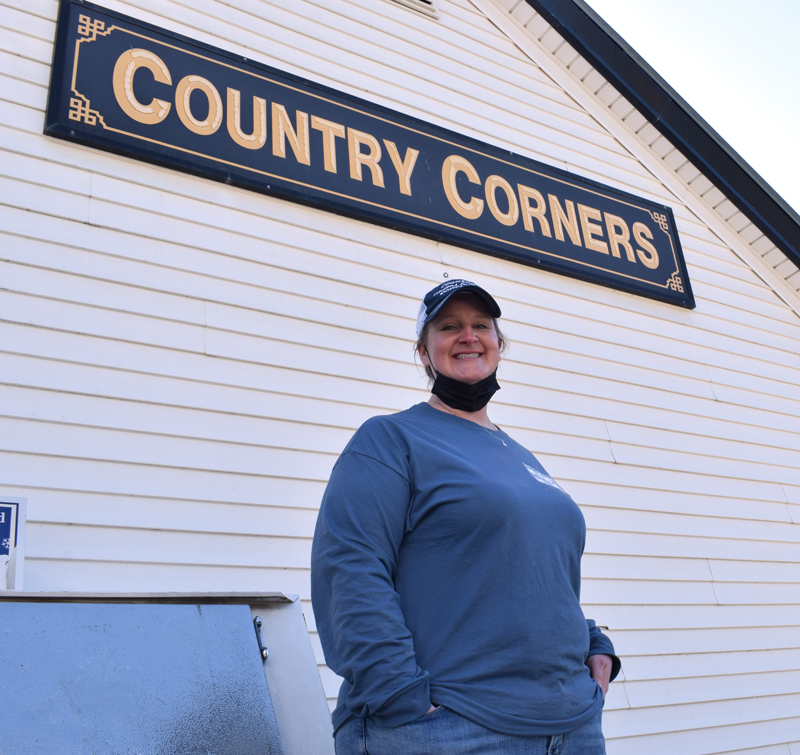 In the 16 years Erin King has managed Country Corners Grocery, the one-stop shop in the Whitefield village of Coopers Mills, she has never faced such a challenge as being an essential business during the COVID-19 pandemic.

“We tried to be proactive. We had to adapt a lot,” King said on Tuesday, March 16.

At the beginning of the pandemic last March, King said she wasn’t sure whether to change the hours of the store or how exactly to handle the situation as everything was so uncertain.

“I have about 15 employees here and for quite a few of them, this job is their livelihood,” King said. “I think it was very important to me that we kept this place operational.”

After a decline in business when life ground to a halt in the second half of March 2020, King saw the community come back to life after a storm knocked out power to much of Whitefield.

The storm served as a “tipping point,” King said, and people started coming into the store to get gasoline for generators, order food, and pick up groceries or other necessary supplies.

“That happened and we were busy. It was like this light switch and all of a sudden, people started coming here,” King said.

She said adapting to COVID-19 protocols and securing supplies of certain items like beef was difficult in the beginning. However, she credited her employees’ dedication and perseverance for keeping the convenience store running smoothly.

To King, the most important part about Country Corners is the local community and her employees.

“They’re like family,” King said of her employees, some of whom have been with the store for 15 or so years.

She said it has been exciting seeing some of her employees go on to become doctors, nurses, or teachers.

“It’s really cool to see this progression. You bring them in and you basically teach them how to work and work ethic,” King said.

She said that Country Corners is a community hub, where many regulars stop in for lunch or their morning cup of coffee.

“We have regulars that we see every single day, sometimes to the point that when they don’t come in for a couple days, you’re like, ‘where has so-and-so been? Hope everything’s OK,’” King said.

The corner store has been in King’s family since 1989 when her dad, Barry King, a Coopers Mills native who taught at Whitefield Elementary School, and her mother, Deborah King, also a teacher, bought the store. The store had been an important part of their lives already, as Deborah and Barry King actually met in the store when he was an employee.

Erin King was 9 years old when her parents purchased Country Corners, and the store has been a part of her life ever since. She now lives in the house right next to the store.

She said her parents bought the store as an investment or retirement plan, and hired someone else to manage it while her father did the books and oversaw the store.

After her father passed away in 1998, her mother continued to own the store with different managers running it. When Country Corners needed a new manager in 2005, King’s mother approached her about the position.

At first, she declined, but soon decided that she wanted to run the family business. “I knew someday I was going to want to have it and I didn’t want to get it too early,” King said.

She attended the University of New Hampshire out of high school and worked at MBNA in Rockland for about five years before returning to Lincoln County.

King said she didn’t originally think running the store would be a long-term career, but “life just kind of took me a different way.”

King purchased the business in 2016 and has been at the helm ever since.

“I think it’s where I’m supposed to be,” King said, adding that the local community is really what brought her back to stay.

“After living out of town for a little while, coming back, you start to appreciate the small town mentality, the small town way people help each other. There’s something to be said for communities that pull together when people need things.”

She also likes to provide local and homemade products, like doughnuts from Chase Farm Bakery or specialty mini cheesecakes from The Perfect Circle Cheesecakery, both based in Whitefield.

“Especially over the past year with everything everyone’s been through, I think people want to support local,” King said.

In her free time, King enjoys spending time with her boyfriend and his 10-year-old son, tagging along for ice fishing and bird hunting. She said she loves the outdoors of Maine, especially the woods, lakes and ponds, in all types of weather.

King also likes riding her two horses on trails across the state, including trails in Andover and Acadia National Park.

“Horses are my therapy, my outlet,” King said.