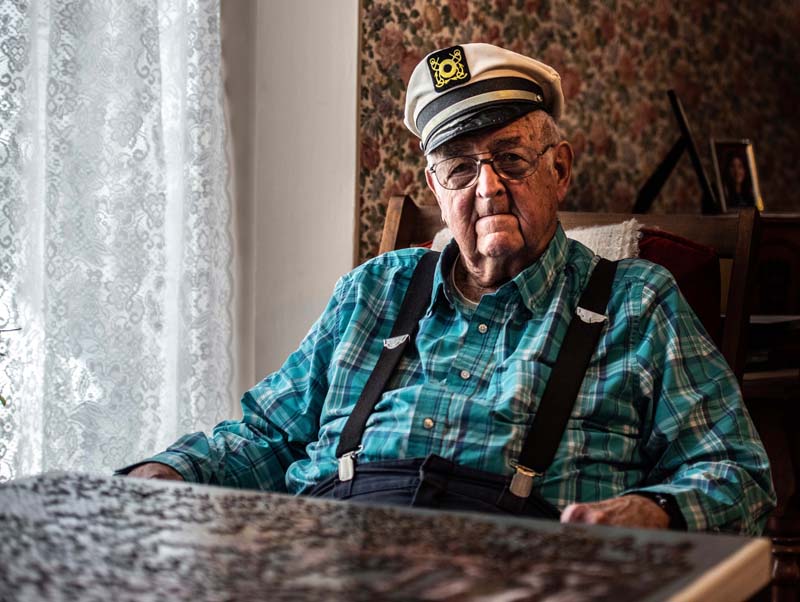 Ray Perkins sits in front of a 1,000-piece jigsaw puzzle at his home in Waldoboro on Sunday, Dec. 6. Perkins has lived and worked in Lincoln County for over 40 years. (Bisi Cameron Yee photo)

Waldoboro’s Ray Perkins grew up on the water, on the North Shore of Massachusetts. So it’s little wonder that he spent the last 42 years of his life in a town with a strong shipbuilding legacy.

Perkins was born in Lynn, Mass., and some of his earliest memories involve boats. It’s a thread that carries across the years. His self-published memoir, “A Taste for Salt Water,” has photos and illustrations of boats in almost every chapter. One of the strongest memories of his military service involves the troop ship that transported him to Japan.

But boating was a hobby, a fond memory from a childhood spent “building rowboats and kayaks,” something he did for recreation.

The arc of Perkins’ work life is grounded in the time he spent as a young man working with his father, a master plumber who owned his own plumbing and heating business. There he started to learn the skills that would help him earn a living.

Until he was drafted.

At the age of 18, on Feb. 8, 1946 — “after the shooting had stopped” — Perkins got his letter. He described how it felt when his number came up. “I was apprehensive about going away, wondering what kind of future I was going to have. Wondering what I would be doing in the Army.”

After eight weeks of infantry basic training in Alabama, Perkins left for Japan on the 600-foot Navy troop ship USS General W. A. Mann, out of Seattle. “I remember standing on deck watching the land slip away, wondering if I was ever going to get back.”

On the third day out in the open ocean, the ship was caught in a typhoon. He could feel the ship flexing: “it felt like it was going to snap in half.” But Perkins made it through the crossing and became a member of the forces occupying Japan after the war.

There, in the 1st Cavalry, 12th Regimental Division, at Camp McGill in Takeyama, Japan, he worked in the motor pool, fixing jeeps and trucks. It was a job he enjoyed. He learned new mechanical skills and achieved the rank of technician, fifth grade before being honorably discharged after 18 months.

“I don’t want to say it was lonesome, but it was,” Perkins said of his time in Japan. He liked the people and admired the beauty of the country. He spent a day trying to summit Mount Fujiyama and remembers how “when nightfall came I could see the lights 40 or 50 miles away.” But it wasn’t home.

Back in the States, Perkins spent the next decade moving from job to job, working with plumbers and carpenters, learning more trades. He even worked for one season at Marblehead Harbor, fixing carburetors and ignitions on boats.

Then, in the early ’60s, he got a job at a metal fabrication plant in Essex, Mass. and became disabled after welding fumes compromised his respiratory system. He found himself unable to breathe freely in places where airborne pollutants were prevalent. These pollutants included secondhand smoke. In those days, Perkins couldn’t find a workplace where no one smoked. And he couldn’t go anywhere without someone lighting up a cigarette in his face.

After being diagnosed with chronic obstructive airway disease, Perkins, once a smoker himself, became an early activist in the fight against indoor smoking. In the 1980s, he founded Mid-Coast Maine Promotion for Clean Indoor Air, and built his membership by contacting people who wrote letters to the editor about secondhand smoke. While the website for the organization has not been updated since George W. Bush was president, it can still be found online.

Perkins moved to Maine in the late 1970s to get away from the pollution of the more industrial Massachusetts. “I thought I could buy land cheap and I think I did,” he said. “I would rather live in a rural area than in a city. Thought I might have to try farming, but I found a job at the Y.”

Perkins went on to work as the buildings and grounds maintenance supervisor at the Central Lincoln County YMCA in Damariscotta for the next 21 years, while at the same time becoming a fixture in the town of Waldoboro, where he still lives.

Perkins continues to support nonsmoking causes. He would like to see tobacco banned completely and he’s not a fan of the burgeoning marijuana industry. He says his health has been better since he began getting flu shots. And he looks forward to receiving the COVID-19 vaccine as soon as it’s available.

Perkins still loves boats. He owns a 14-foot fiberglass motorboat, but hasn’t taken it out for 10 years. “I would love to have my father’s boat,” he said, “and take it to Bermuda.” But he knows the time for that dream has passed.