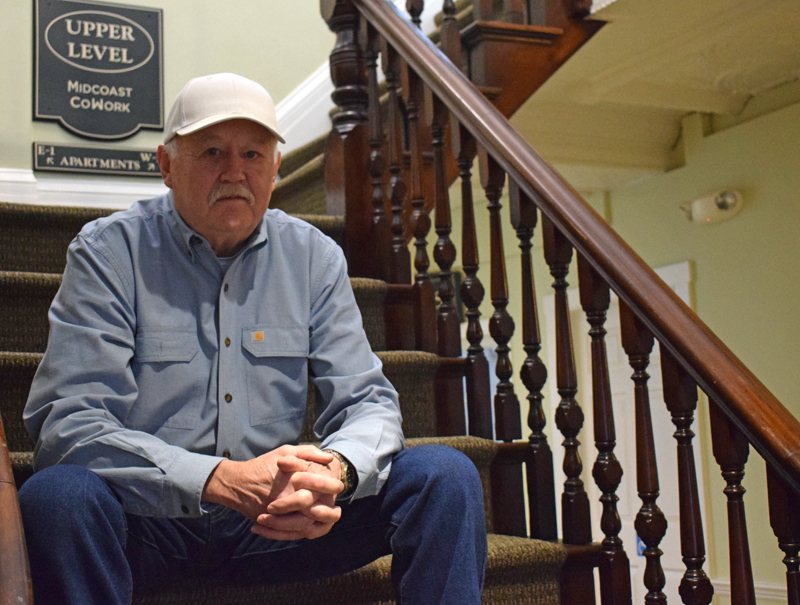 Ross Flood, owner of the Damariscotta Center building, sits on a staircase inside the 163-year-old structure on Dec. 22. Flood bought the building in 2000 and made extensive improvements to it. (Evan Houk photo)

If you’ve driven thorough downtown Damariscotta between approximately 7:45 and 8:30 a.m., then you have likely seen Ross Flood.

Nearly every morning, Flood is out in front of the Damariscotta Center building, meticulously cleaning off the sidewalk before moving on to the interior.

First, Flood runs a leaf blower along the sidewalk, removing all dust and debris. In the warmer months, Flood also washes off the entire sidewalk in front of the building with a hose and waters the many plants outside the building.

Inside, Flood sweeps and mops the floors while checking out the building. All in all, he has the routine down to about an hour in the morning.

Flood, who has long worked in landscape maintenance, has owned and taken care of the property for the past 20 years and said he enjoys keeping up with the 1857 brick building because it gives him something to do. However, it is clear that he takes great pride in the building and the wider community he belongs to in Lincoln County.

“I’ve always wanted a brick building and this one happened to be on the market,” Flood, an Oklahoma native, said in his thick Southern drawl during an interview on Dec. 22.

During the early morning interview, after Flood made the rounds at his building, he interacted with a few of his tenants, who seemed pleased to see their landlord.

“I enjoy working on it, and I’ve got a great clientele here,” Flood said of the building.

A resident from an upstairs apartment loaded a trash bag into Flood’s truck, which was parked in front of the building on Main Street.

“I’m the trash man too,” Flood said with a laugh.

Flood grew up in Stillwater, Okla., where his parents ran a livestock auction, before attending Oklahoma University for business management, although he is not sure how helpful that instruction was for him.

He said that in the late 1970s, when he was in school, his instructors taught more about big business and not so much about the mechanics of running a small business — skills he would soon develop on his own.

During his time at Oklahoma University, Flood began to work for a landscape maintenance company, taking care of what was then known as Liberty Tower in Oklahoma City.

The 500-foot office skyscraper, now called BancFirst Tower, is the second-tallest building in the city and the sixth-tallest in the state. In 2016, the trick shot crew known as Dude Perfect set the world record for the highest basketball shot, draining a basket from atop the tower.

After college, Flood decided to open his own landscape maintenance company, Tierra Vista Inc., which means “earth view” in Spanish, and settled in Tulsa, Okla.

He ran that company for 25 years, he said, before it came time to sell during a consolidation trend in the industry in the late 1990s.

Around the same time, Flood and his wife, Cindy, found their ideal piece of property in New Harbor and purchased it. They were not planning to retire, relocate, or build on the property for some time. But after selling his company, the couple made the move along with their two children, Callie and Tom, who were 5 and 9 years old at the time, respectively.

Flood had been vacationing with his family along the East Coast for years, starting in Florida and working his way up through the Outer Banks, eventually visiting Maine’s Midcoast. 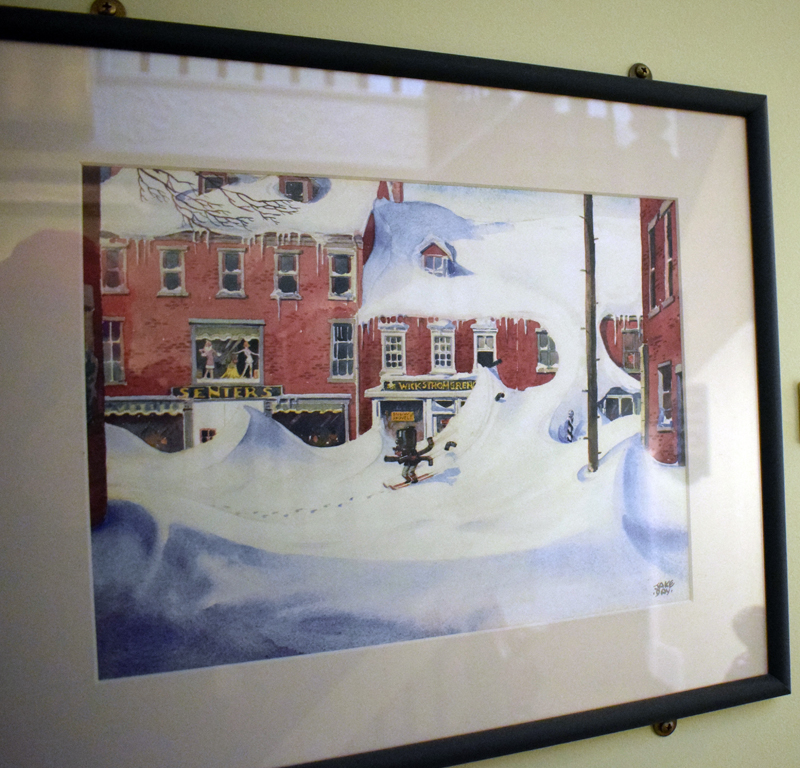 A painting by the late Damariscotta artist Maurice “Jake” Day depicts the Senter’s Department Store, now the Damariscotta Center building. The painting hangs in a hallway of the building. (Evan Houk photo)

During one trip up the Midcoast, the Floods stopped into Moody’s Diner in Waldoboro. It was there that Flood met a local undertaker, who recommended the coastal areas of Friendship and New Harbor as good places to visit.

“It’s been a great move for us,” Flood said.

Flood noted the beautiful scenery and especially the sense of community and connection in New Harbor that, in his mind, make it a “great place to raise kids.”

He said his kids had the freedom to ride bicycles and have fun without fear in their neighborhood.

“And everybody knew everybody,” he said.

He said that compared to the hustle and bustle of Tulsa, which has a population of approximately 400,000, Lincoln County offered a welcome change of pace.

Flood mentioned the honor system in use at many roadside stands in the area as a symbol of community trust.

“That would never happen in Tulsa. They’d take the table, the cash, the oysters, everything,” Flood said with a laugh.

“When you get away from that, you realize how special this place is,” he said.

He said that friends often ask him why he and his wife chose Maine.

“Then I get them to come up here and they realize what we got,” Flood said.

Flood completed extensive upgrades to the Damariscotta Center building after he bought it, while attempting to maintain the look and feel of the historic structure.

“It needed a new roof, new windows, new lighting, new signage, everything. But it had great potential,” Flood said.

Flood said he thinks Damariscotta’s new historic preservation ordinance — a cause for concern among some downtown property owners — is a good idea.

The Damariscotta Center building was home to Senter’s Department Store from the 1920s until the early 1990s. A painting by the famed Damariscotta artist Maurice “Jake” Day, of the old department store buried under a heavy snowfall, hangs in the halls today.

Flood said many of his tenants remember running up and down the stairs of the old department store as kids.

Flood still owns some apartments and commercial buildings in Oklahoma. He and his wife used to travel there twice a year, but did not in 2020 because of COVID-19.

Flood is excited about the ongoing waterfront project, which will redo the municipal parking lot behind his building, add public restrooms, and make improvements to Riverside Park.

“It’s going to be a destination place, I think, once we get through this virus and get this parking lot done up,” Flood said.