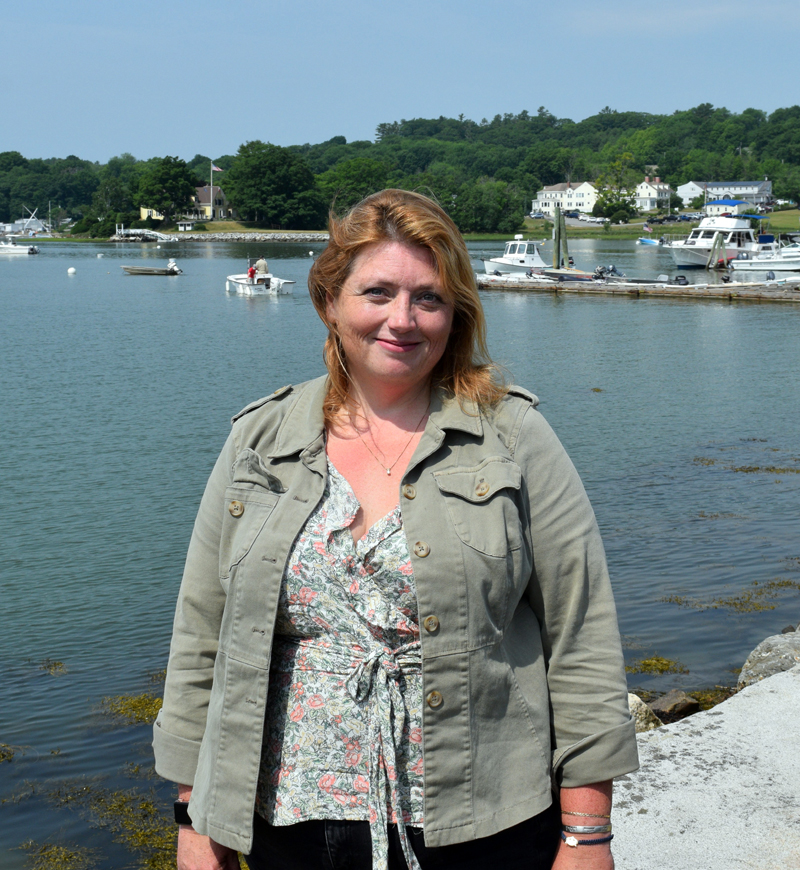 Rebecca Graham is one of three legislative advocates representing municipal officials in 484 towns in the Maine Legislature. She also serves on the Edgecomb Planning Board. (Nate Poole photo)

Rebecca Graham is a champion of municipal governance, but she’d be the last to say anything of the sort.

On a sunny morning on Monday, June 21, she discussed storm water runoff, solar farm regulations, her new motorcycle, and elections in post-Soviet countries at length but without pretense.

This depth of knowledge on a wide array of subjects is partly because Graham is a legislative advocate with the Maine Municipal Association’s State and Federal Relations Staff, as well as a member of the Edgecomb Planning Board.

In a day’s work, Graham represents 484 Maine towns in cooperation with two other legislative advocates as she engages with an array of joint standing committees, from Criminal Justice and Public Safety to Environment and Natural Resources to Insurance and Financial Services.

Graham said that a major tension of her job is pushing past political genuflecting that lacks the willingness to leverage the funds to back it up. She said that when legislators pass mandates without proper funding, the costs come down to property taxes, which means that municipal officials are often stuck with pushback from their communities.

Graham said the job isn’t as simple as acting as a voice for municipal officials in the legislature. She takes pride in leveraging the voices of town clerks, treasurers, administrators, and other officials to speak up about the issues that they all collectively face.

“The people that dedicate their lives to service to their community are so worth all of that effort, and I think municipal government is where the rubber meets the road and where all these progressive responses are actually being delivered on shoe strings and creativity,” Graham said.

Although Graham began working for MMA in October 2017, she has always had a municipal thread running through her career, and she is deeply interested in a Mainer identity that values close-knit community support.

Graham grew up in Gardiner and has lived between Kennebec and Lincoln County for most of her life. After graduating from Gardiner Area High School, she worked as a dispatcher for the Kennebec County Sheriff’s Office and the Waterville Police Department before teaching information technology at Chewonki in Wiscasset for 10 years.

Graham later attended the University of Southern Maine as a nontraditional student and earned her B.A. in humanities with a specialty in anthropology and archaeology in 2012, all while supporting three children and working a full-time job.

After graduating she completed an archaeology project on the Kennebec River studying a 1718 Scotch-Irish settlement from Northern Ireland and began working with the Maine Ulster Scots Project, an organization dedicated to promoting awareness of Maine’s Scots-Irish heritage.

“The things that we take for (granted) as being from Maine are really driven by that particular settlement,” Graham said. “They were very much about community and local control, and that helped drive Maine to become a state.”

This eventually became the springboard Graham needed to travel to Northern Ireland and earn a Master of Laws degree with a focus on human rights from the Transitional Justice Institute at Ulster University in 2014.

Since then she and the Ulster Scots Project have been promoting connections between Northern Ireland and Maine and designing curriculum for local history teachers to use to broach the subject of immigrants’ experiences in the classroom.

“We need to figure out how to make service and civic service sexy again for this next generation,” Graham said.

Beyond Maine’s government, Graham also does democratic governance work for the Organization for Security and Co-operation in Europe, a multinational effort that helps post-Soviet countries adhere to domestic laws and international obligations.

Last winter, Graham spent six cold weeks in Kazakhstan to help facilitate their elections, and she has also travelled to Albania, Ukraine, North Macedonia and Armenia.

She got involved with the organization after she attended the Venice School of Human Rights over her summers in Europe, where she took trainings on election monitoring and, recognizing that her background made her uniquely qualified, began applying for missions after she came back to the states.

As an election clerk in Edgecomb, Graham said that she sees little difference between the municipal officials on the ground in Kazakhstan and those in Maine.

“Municipal officials are all about doing and just getting it done. So they’re at the political winds, whether it’s Armenia or Damariscotta, but the people, the town clerks, the election clerks, they are all about making sure everything is done right and within the regulations,” Graham said. “It’s the most thankless job on the face of the earth, but it’s the most vital.”

When Graham is not in Augusta or a post-Soviet nation, she hosts concerts in her front yard featuring local bands. She began to hold music festivals last summer as a way to get the community together in a socially distanced capacity, with the names always playing on the name of her friend Chuck Benton, who is involved in the local live music scene. The last festival, held earlier this month on June 5, was dubbed Chuckchella.

While Graham enjoys the festivals and her international work, she said that she can’t imagine moving on from working with Maine’s particular municipal governments.

“I don’t think that I could advocate for another group because I am constantly learning and I do need that,” Graham said.