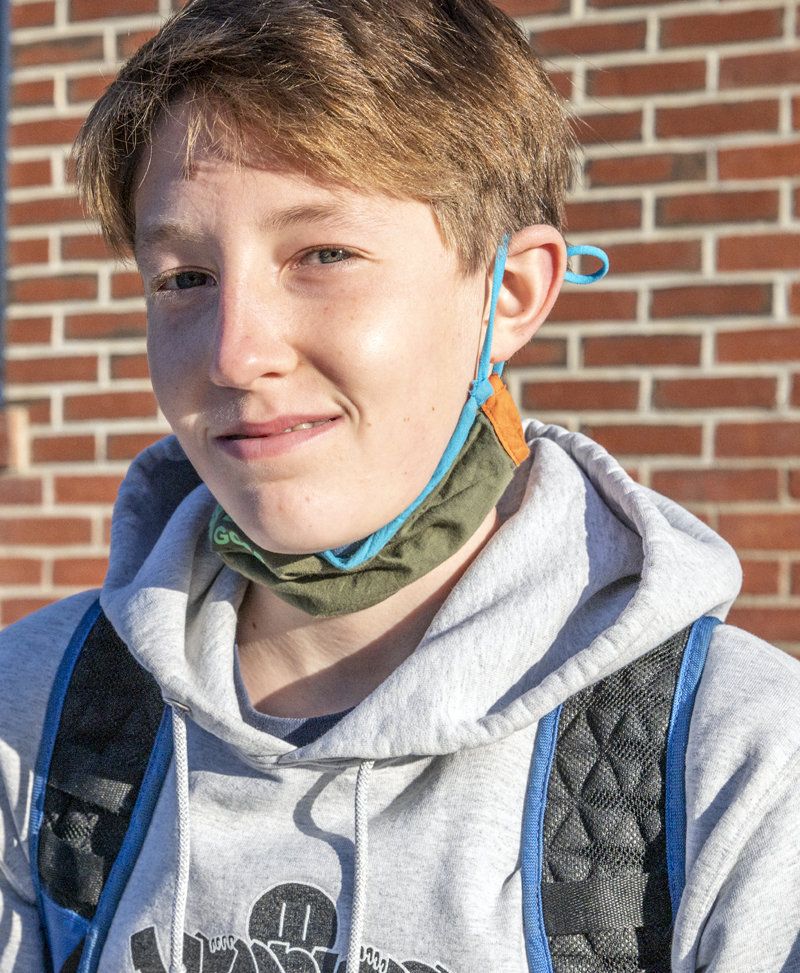 Roan Donaghy poses for a photo at Lincoln Academy in Newcastle on Jan. 11. Donaghy is a freshman at L.A. this year. (Bisi Cameron Yee photo)

“There’s something about just riding and feeling like you can fly. You can go off really big jumps and slide on these really cool rails. Landing a trick is the best feeling ever, especially if you’ve practiced it for so long. You just feel this rush of adrenalin. And you’re so happy.”

That’s how 14-year-old Roan Donaghy describes how he feels about his favorite activity.

Donaghy likes nothing more than hanging out with friends and scootering. Freestyle scootering, a sport that combines elements of BMX biking and skateboarding, is an offshoot of the skateboarding culture that came into its own in the 1980s.

At 14, Donaghy is among the younger members of his friend group. He collected their old scooter parts to build his own when his friends moved on to skateboards. He practices practically every day and makes videos of himself to post on Instagram as he conquers new moves.

“You get hurt a lot,” he said. Mostly scrapes and bruises – his worst injury a sprained wrist. “I push myself really hard.”

Donaghy has spent hours working on landing a single trick. Focus and commitment are key takeaways he’s learned from his sport of choice. But he does it because he enjoys it. “It’s the funnest thing I can think of doing,” he said.

A scooter consists of a footboard on two wheels with a long steering handle. It’s propelled by pushing off against the ground with one foot. The rotation of the handle provides the mobility necessary to do tricks.

According to an online article on the history of scooters from electric scooter manufacturer Varla, scooters have been around since 1817 and saw their first surge in popularity in the 1930s when children built their own from recycled wood.

Scooters continued to have periods of popularity from the Radio Flyer push scooter in the 1960s to the Razor scooter, named the toy of the year in 2000. Electric scooters like Segways brought scooters even more into the mainstream, and in 2017 portable electric scooters became prevalent in many downtown areas as an eco-friendly transportation option.

But it took a minute for scootering to be accepted as a sport on a par with skateboarding and BMX. Scooters are easier to use, tricks can be easier to learn, and the starting age for scooter riders trends younger. Starting younger is what has given scootering its hold with more kids growing up in the sport. Now there are national tours with competitions and prizes.

Frustrated by the limited places to gather and practice tricks in the area, Donaghy recently started a petition to build a skate park in Damariscotta. He’s already garnered signatures from community leaders.

“I think he has a compelling case,” said Lincoln Academy Head of School Jeffrey Burroughs, adding “it’s important (for students) to take the initiative to talk to people in power.”

Young people represent an important constituency in the local community and towns throughout Lincoln County are trying to find ways to provide places and programs for teens. 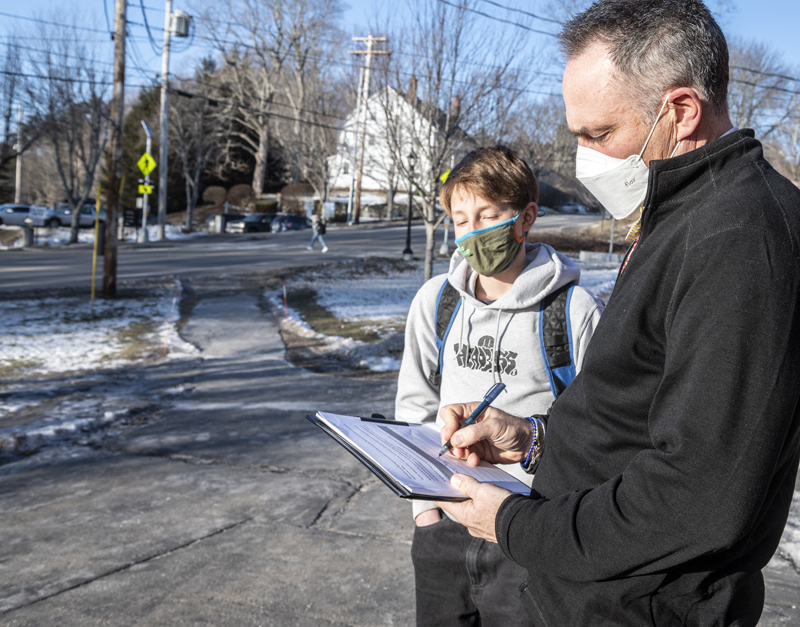 Roan Donaghy observes as Lincoln Academy Head of School Jeffrey Burroughs signs his skate park petition in Newcastle on Jan. 11. Burroughs supports the park as a place where kids can “be together in a constructive way.”  (Bisi Cameron Yee photo)

In an email, Damariscotta Town Manager Matt Lutkus said, “I think the idea of having a skateboard park is a great one.” He worked for a city previously that had a park and “the kids loved it and it was great fun to watch them.”

“I think a skateboard park is possible,” he said. “But it is going to take involvement from citizens and businesses to make it happen.”

Damariscotta Police Sgt. Erick Halpin supports the concept of a skate park. He sees it as a way to provide a safe space for young people to gather that is a better option than the roads, sidewalks and parking lots of downtown. “For the best interest of public safety, we support it,” he said.

While Donaghy goes to skate parks in Bath, Camden, or Augusta when he can, having a place in his home town is a dream he’s had for well over a year.

While scootering may be the nexus of his existence right now, Donaghy does have a life outside his hobby.

He grew up in Newcastle and attended Great Salt Bay Community School where he participated in the Great Salt Bay Students Investigate journalism program with an article on fundraising for a skate park.

Donaghy has always been active in sports including baseball, football, basketball and cross country. He played baseball from the age of four or five, mostly as a shortstop and pitcher. He was a member of the 2021 Midcoast Babe Ruth championship winning Damariscotta Lions.

He recently moved to Damariscotta, and started his freshman year at Lincoln Academy where he made the first trimester honor roll and continues to run cross country. Donaghy likes LA and the opportunities it provides to meet more people, to learn new things. He likes his teachers; English and World History are favorite classes.

He’s learning about Greece right now, but he’s more interested in the 20th century, particularly the civil rights movement. He credits his 8th grade teacher with fostering his interest in history and his parents for the focus on civil rights. 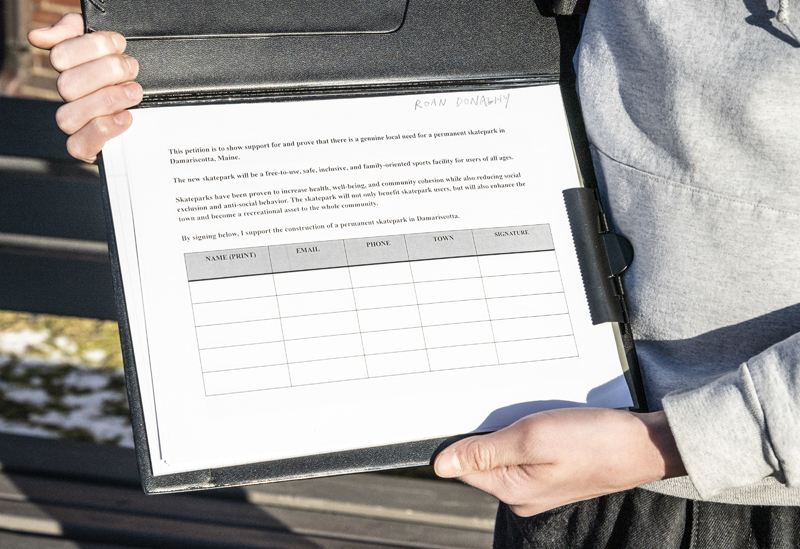 Roan Donaghy displays his skate park petition in Newcastle on Jan. 11. Donaghy sees the park not only as a place he can practice tricks on his scooter, but also as a recreational asset for the whole community. (Bisi Cameron Yee photo)

Donaghy has attended several vigils at Veterans Park in Newcastle. He’s also completed school projects on Martin Luther King Jr. and civil rights activist and former San Francisco quarterback Colin Kaepernick. He likes the idea of people changing the world, especially the difference that can be made by those who may not be in positions of power.

“I think we’ll get there eventually,” he said.

He’s put those principles into practice too. While visiting the Augusta skate park, he and a friend talked to a homeless man they met sitting on a bench with only a blanket. The temperature was around 10 degrees, according to Donaghy. The teens bought him hand warmers, food, and coffee.

Wanting to do more, they started an online fundraiser and gathered over $500 to get him a hotel room for the coldest nights. But when they returned to Augusta, they weren’t able to locate him. They distributed the money to homeless shelters instead.

“We just felt so bad because it was so cold out. We had to do something about it,” he said.

Donaghy said he doesn’t remember much of the time before COVID. His parents are fairly strict about safety protocols, discouraging indoor gatherings at concert venues and movie theaters, encouraging masks.

He is vaccinated and recently received his booster. “I’m not really worried that much about it anymore. Masks are annoying but I’m really pretty used to it.”

The biggest impact he sees is on his ability to travel.  He still gets to visit his grandmother in Cape Cod in the summer. Her house is right across the street from a skate park.

“She lives in a really cool area,” he said. “And she’s a really good cook and there’s beaches close by. I love going there.”

But he dreams of going to New York City to see the cool shops, to visit the skate parks.

“I’d be able to see a lot of people I know from videos and magazines, famous people,” he said. “It’d be cool to meet everybody.”

Donaghy sees college in his future, but that future is still a long way off. Right now he is looking forward to summer.

“When you get into scootering, you want to get outside,” he said.