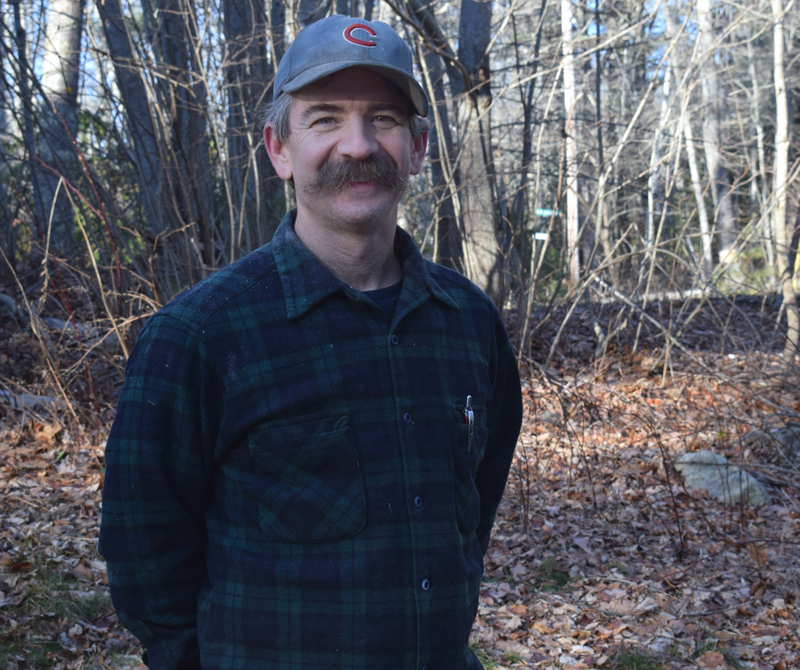 Bristol woodworker Darin Carlucci outside his home on Dec. 15. After 17 years as an instructor at The Carpenter’s Boat Shop, Carlucci’s current project is building unique wooden structures for a bird of prey exhibit at a New Hampshire science center. (Evan Houk photo)

Bristol resident Darin Carlucci is many things — a woodworker, a firefighter, a school committee member, a husband and a father, a dancer, a guitar player, a birder, and a builder.

“I’m always game to learn something new. I think that’s what keeps me going, is learning new stuff,” Carlucci said during an interview at his home-based woodworking shop on Monday, Dec. 14.

Carlucci traveled over 3,200 miles from his hometown of Silverdale, Wash. to the Maine coast, following his interests wherever they took him, before he discovered an unanticipated passion for woodworking.

After graduating high school, Carlucci began working at a ski resort in Idaho. When a co-worker mentioned to him that she was moving to Maine to work on an organic farm after the ski season, he thought that sounded like a good opportunity to lead a simpler life, and he set out for the East Coast at the age of 22.

Carlucci said there was plenty of sailing on the Pacific coast of Washington, but what drew him to Maine was the sheer number of uninhabited islands and the opportunity for fresh sailing adventures that suggested.

According to the Maine Coastal Island Registry, there are about 3,300 islands along the Maine coast, many of them uninhabited.

Carlucci landed in Maine in October 1994 and started a farm apprenticeship through the Maine Organic Farmers and Gardeners Association.

Something about Maine stuck and Carlucci has been living in the state and staying involved in the community ever since.

“What keeps me here is the community life,” Carlucci said, describing how he feels a greater connection to people than he did in his hometown of Silverdale, which is about 17 miles west of Seattle, as the crow flies, across Puget Sound.

After a year working at a farm in Morrill, Carlucci began working on schooners in Camden, pursuing his interest in sailing.

In order to expand his boating knowledge and skill set, Carlucci signed on at The Carpenter’s Boat Shop in Bristol for a nine-month apprenticeship. It was at the boat shop where he discovered a love for carpentry and woodworking.

“I enjoy the challenge,” Carlucci said, verbalizing what could be a mantra for his life.

After the apprenticeship, Carlucci went back to working on wooden boats at Rockport Marine. He said he had the idea of becoming a sailor and possibly heading down south on a boat, until he met his future wife, Serafina, while contradancing.

“We were avid dancers until we had kids,” Carlucci said with a laugh. 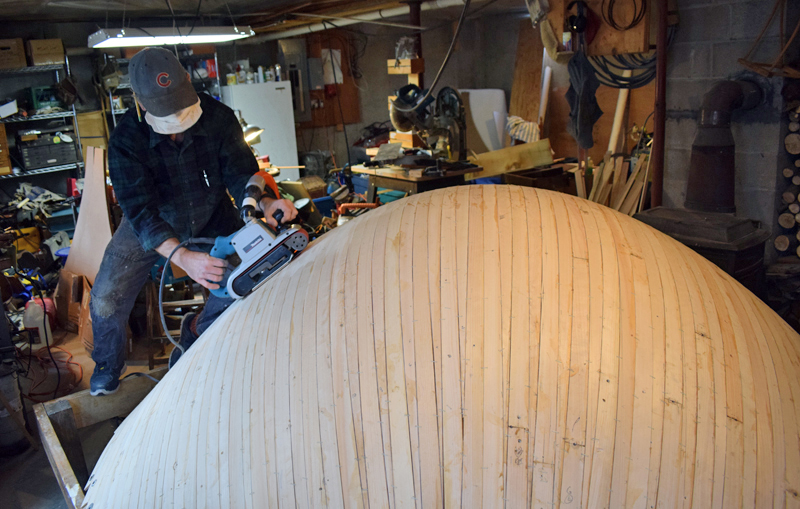 Bristol woodworker Darin Carlucci sands a wooden parabolic bowl in his home workshop on Monday, Dec. 14. A New Hampshire science center will use the bowl to demonstrate the superb hearing of owls. (Evan Houk photo)

The couple has two daughters, Linnea, 7, and Calla, 5, who attend Bristol Consolidated School, where Carlucci chairs the school committee.

Carlucci has served on the school committee for over 10 years, since he saw that no one had taken out papers for a committee position and he decided to give it a try. He also recently joined the Bristol Fire Department.

Carlucci enjoys seeing the slow progress of initiatives and policy decisions over time and how they impact the children and the wider community that the school committee works to benefit.

“Being around all these people working in education all the time has been fascinating. I learn something all the time,” Carlucci said.

In 2003, Carlucci settled into a long-term position as an instructor at The Carpenter’s Boat Shop, where he and Serafina worked until this past spring.

There he realized he had a passion for teaching, as well as learning.

“I was inspired every year by these new people coming and them being so excited about what they were learning and what I was teaching them. I didn’t anticipate how much I would learn from them as well,” Carlucci said.

He said the questions apprentices would ask pushed him to learn more in his role as an instructor.

This spring, right about the same time the coronavirus pandemic upended life as usual, Carlucci decided to leave the boat shop and try something new.

A co-worker at the boat shop soon informed him of a unique woodworking opportunity that combined Carlucci’s love of building things and birding.

Carlucci’s current project is the construction of two giant wooden eggs and two large, wooden, parabolic bowls to be used in a raptor, or bird of prey, exhibit at the Squam Lakes Science Center in Holderness, N.H. 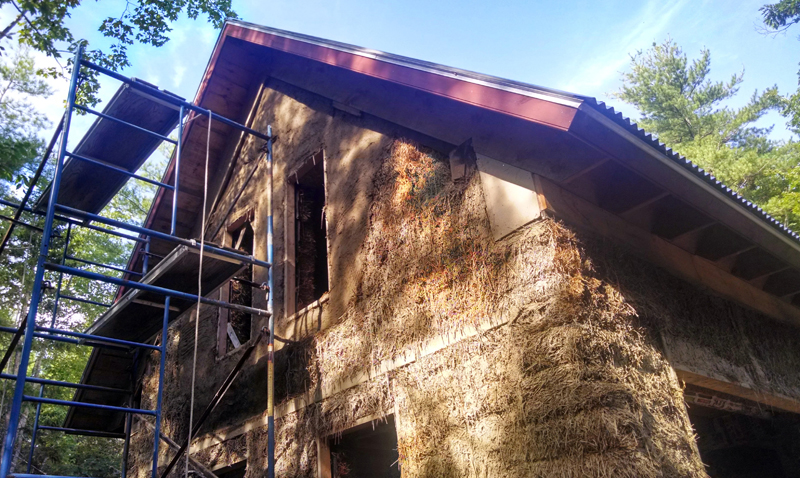 Bristol woodworker Darin Carlucci is building a house insulated with straw in Round Pond for himself and his family. He hopes to have it ready to move into by next year. (Photo courtesy Darin Carlucci)

The bowls, which measure 8 feet across and 28 inches deep, will be used to demonstrate the incredible hearing of owls. Visitors to the science center will sit in each of the two bowls and be able to talk in a normal voice to each other from about 100 feet away.

Carlucci said the project is fairly unique. He has found plans and schematics for similar projects across the country, but most are metal fabrications that are not specifically designed to mimic an owl’s hearing.

He said he is enjoying the challenge of the new project, but is glad he has until February to work out all the kinks and finish the job right.

In addition, Carlucci has been building a house insulated with straw bales in Round Pond for himself and his family. He and Serafina have been working on the house for the past nine summers, on breaks from their work at The Carpenter’s Boat Shop. He hopes to have the house ready to move into sometime next year.

The couple took a timber-framing course and used the knowledge gained to construct the skeleton of their new house. Carlucci said the straw material ensures there are no gaps in the insulation and that it is more cost-effective and environmentally friendly.

Carlucci said that in the near future, his main focus and newest challenge is completing the house. Beyond that he has no plans. But if Carlucci’s past is any indication, he will surely continue to learn new things, serve the community, and seek out fresh and interesting experiences.