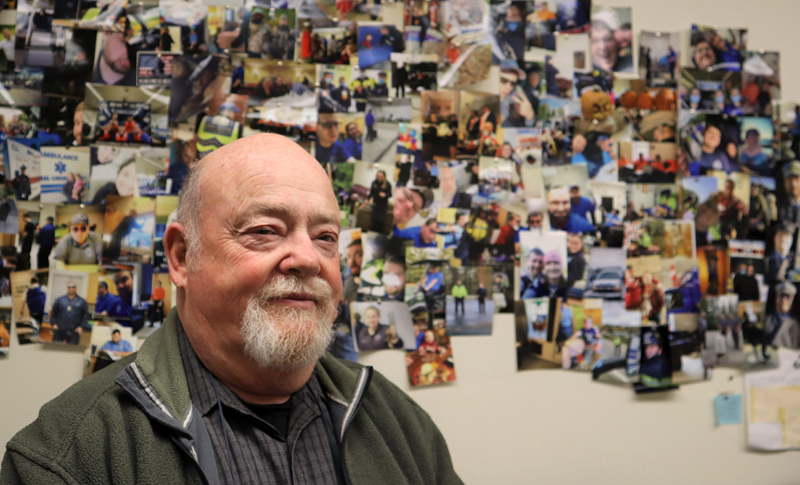 John Gallagher stands in front of a wall of photos of emergency medical service workers and volunteers at Central Lincoln County Ambulance Service in Damariscotta. After half a century with the service, Gallagher will retire in early 2022. (Emily Hayes photo)

At 72, John Gallagher is not one to give up easily, either in his professional or personal life. He’s been an emergency medical technician for Central Lincoln County Ambulance Service for 50 years, and he started “going together” with his late wife Mary Gallagher when they were in kindergarten up until she died of brain cancer in 2007.

During his 50 years at CLC Ambulance, Gallagher has seen the ambulance service through some big changes over 50 years. He remembers when the local hearse, nicknamed the Grey Ghost, also served as the town’s ambulance, and when CLC Ambulance acquired two-way radio communication.

Now, after a half-century, he is ready to leave the service to the next generation.

Gallagher himself has also gone through a healthy amount of changes over the years. He was a teacher at Morse High School in Bath for nearly a decade. He worked for the Lincoln County Sheriff’s Office for 25 years as a body recovery diver, in addition to being a commercial diver. He took over his father-in-law’s insurance agency and auto shop, and he serves on the board of trustees representing his hometown Damariscotta for the Great Salt Bay Sanitary District.

And in 2014, he was named Maine EMS of the Year at the Maine State Grange convention for the hours of work he dedicated to CLC Ambulance each week for 42 years.

It was the late Sam Roberts, one of the founders of CLC Ambulance Service and former publisher of The Lincoln County News, who pushed Gallagher to join the service in the early 70s. However, it wasn’t until one of Gallagher’s students had an epileptic seizure and sliced his head open on a piece of metal in his classroom that he decided to look into EMT training.

“Everyone should have basic first-aid training,” he said. 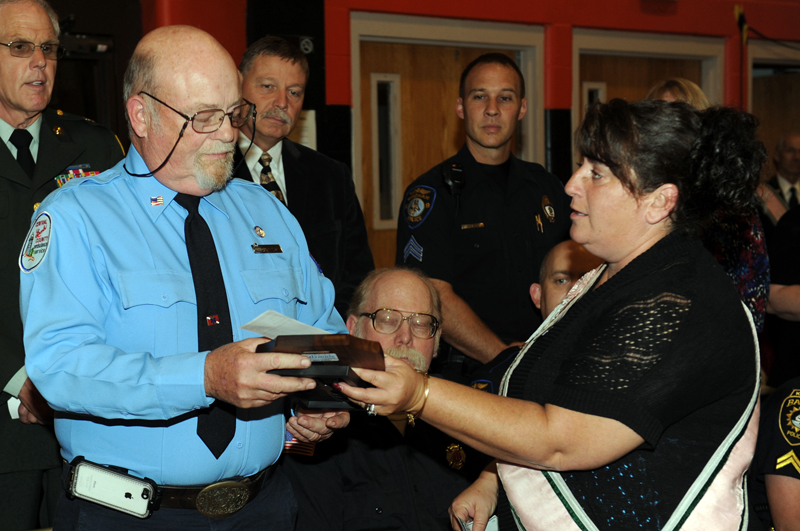 The requirements for acquiring and maintaining an EMT license in Maine are becoming increasingly rigorous. To get a basic EMT license, candidates have to spend almost 200 hours in a classroom, but when Gallagher started it was 60 hours.

The state wants most emergency medical service workers to be full paramedics, Gallagher said, but “all levels are needed to make an EMS system work, particularly in rural Maine,” where the classes and personnel aren’t readily available.

Each full-time EMT with CLC Ambulance likely goes out on 400 to 600 calls per year, Gallagher said, which should count as their training for maintaining their license unless there are new protocols or new technology they need to learn how to use.

“The only thing that keeps me safe is experience,” he said.

As the number of calls increased from 500 to 1,500 per year, CLC Ambulance leaders like Gallagher realized the service had to pay its workers a living wage instead of relying on them largely as volunteers while they work other jobs to pay the bills.

As someone who, along with his twin brother James, grew up with parents encouraging them to do good in the community, Gallagher admits he was reticent at first when the volunteer service transitioned to paid work. But it has “proven to bring in the highest quality people – people who care, which is just as important as what you know,” Gallagher said.

Now, EMS workers for CLC Ambulance can make $25 per hour and pursue what Gallagher volunteered to do as a career in helping people in their community.

In addition to increasing pay and making EMS education more accessible for young people, however, loosening some of the requirements for an EMT license would help young people see the role as “less of a mountain to climb,” and help fill the shortage of workers, Gallagher said. 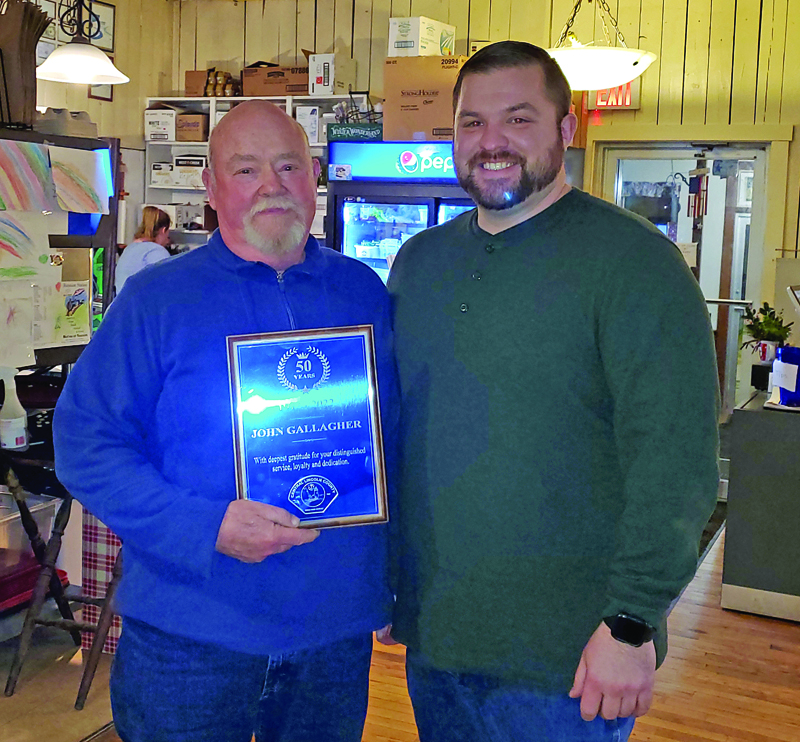 John Gallagher is presented a plaque to commemorate his 50 years of service to Central Lincoln County Ambulance Service by Service Chief Nicholas Bryant. Bryant made the presentation to Gallagher at the services annual dinner held Dec. 8 at Reunion Station in Damariscotta. Gallagher has the longest service record of anyone in the history of the service. (Courtesy photo)

“We can’t all be doctors or nurses,” he added, though he admires his current wife, Rachel Gallagher, for being one at Mid Coast Hospital in Brunswick.

But what the ambulance service needs now is young people who care about helping people in their community and are committed to the service.

If students in local schools engaged in community service projects through their education system, they could be inspired to serve their community later in life as well, Gallagher said. He hopes Lincoln Academy will establish a basic first aid or EMT course to encourage students to get involved, he said.

“When students see (a medical emergency) for the first time in a controlled environment, they can react better when something actually happens,” Gallagher said.

Over the years, Gallagher has filled the role on the ambulance service’s board of directors and served as a consistent presence responding to emergency calls.

With Nick Bryant as service chief, Gallagher said he is “leaving the place in good hands,” and feels he can step back. Bryant was the first recipient of Mary Gallagher’s scholarship fund at Lincoln Academy for students who are interested and willing to dedicate their lives to emergency medical services work in the way the Gallaghers did. Before her passing, Mary Gallagher served CLC Ambulance for 28 years as an EMT.

“There is no other way to describe Nick except for dedicated, smart, and caring, and he’s done a good job at keeping this place going,” Gallagher said.

Gallagher predicts he will go through withdrawal from the ambulance service after Feb. 28, but he hopes Bryant will keep him involved in some way. He already buffers the floors of the station and keeps them clean, but as an advanced EMT, Gallagher does everything wholeheartedly.

“Knowing I’ve helped people brings me a lot of comfort,” he said.