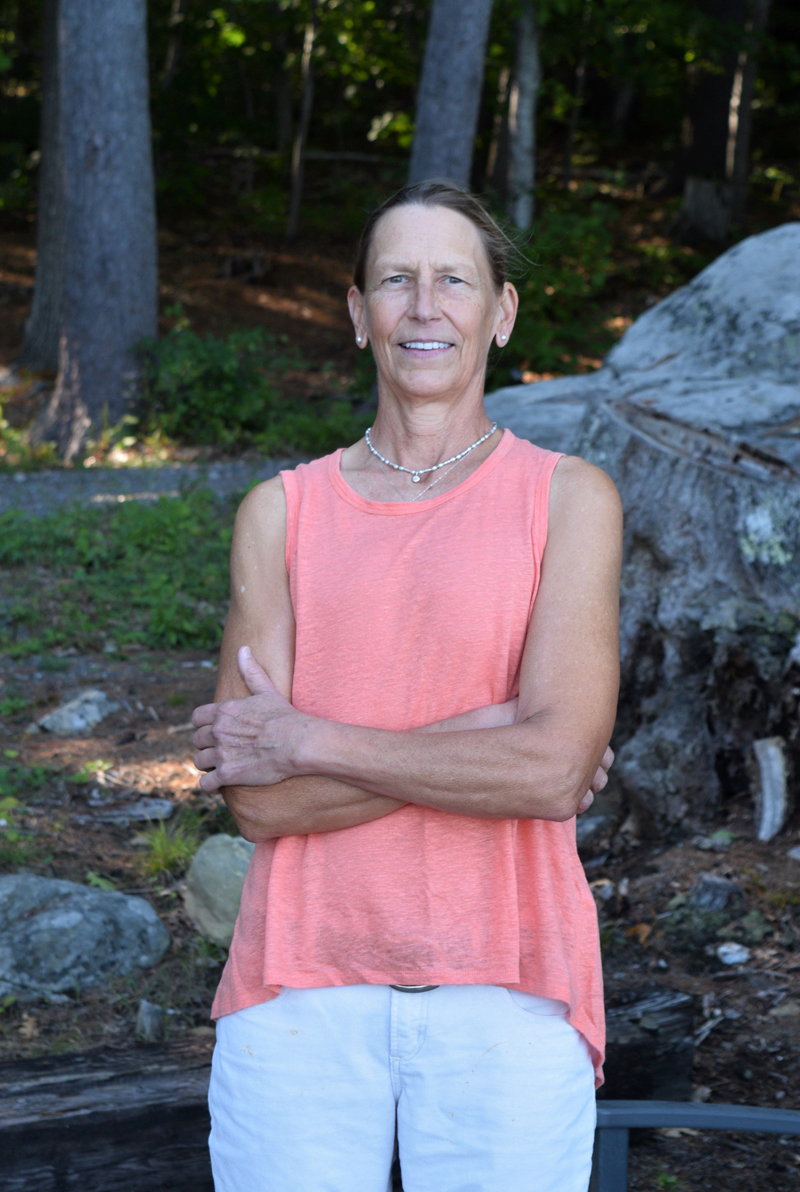 Barb Scully at her dock on the Damariscotta River at 707 River Road in Edgecomb on Monday, Sept. 6. The founder Glidden Point Oyster Farms, Scully is a major figure in the Maine oyster industry going on 35 years. (Nate Poole photo)

Sitting out on her dock on the banks of the Damariscotta River, Barb Scully surveyed the serene view of her lease. Seated comfortably in an Adirondack chair, she interrupts her own thought to point to a blur soaring over the wooded banks.

It’s not an unfamiliar sight for Scully, but it somehow doesn’t get old. Taking in a cool breeze and a nice view of the industry she helped build; these are the quiet moments success affords her.

Widely known as the founder of Glidden Point, Scully entered the oyster business 35 years ago and never looked back. Glidden Point oysters are now valued and distributed across the United States, producing more than 10 million oysters at its height.

Scully’s love for the ocean was born on the Jersey Shore, where her grandparents owned a small stretch of waterfront where she could fish, crab, and catch and sell bait. Wherever she has found herself in life, she has always been on the water.

“I didn’t have the good fortune of having been born in Maine, but I was smart enough to get here as soon as I could,” she said.

Scully pursued a degree in zoology from the University of New Hampshire, spending her summers working at the Shoals Marine Laboratory on Appledore Island, the university’s cooperative marine science research program with Cornell University. After she graduated in 1986, she moved to Maine to begin working for the Department of Marine Resources.

At the same time, she volunteered at the Darling Marine Center in Walpole, assisting with its efforts to breed oysters that would do well in cold water.

A worker by nature, Scully took on just about any job she could to make some extra money and get to know the community; she cut and delivered firewood “just for fun,” filled dories with seaweed, and packed fish and oysters in addition to her full-time job and volunteering.

Some of the folks at the Darling Marine Center gave Scully some of their oyster seed once they finished their project, and she experimented with culturing the bivalves. With that, she became one of the handful of disparate, scientifically-minded individuals that kick started Maine’s oyster industry.

Scully continued to work with Darling for over 12 years for a steady income while she worked evenings and weekends to slowly build her oyster business. All of that effort eventually produced enough success to provide more than enough for her children and herself.

While Scully was proud of the Glidden Point brand and the financial security it provided, it was a challenge with her other important role as a single mother.

“It was a wicked juggling act,” she said.

One of the ways she made it work was by making her children, Morgan and Bennett, part of the business. Not only was it a way to spend quality time with her kids, but also a way to pass on some valuable life skills.

“As a parent, it was an opportunity to teach them so many more things than I would have been able to if I was just putting them on the school bus and they were working for other people for the summer,” Scully said.

Even before college, both of Scully’s children were gaining experience and confidence as crew managers that others don’t get in a lifetime. Scully is now witnessing the fruits of her effort in her children’s’ own successes; Bennett Scully works as an engineer in Portland and just bought his first home at 25, and Morgan Scully is pursuing her Ph.D. in Massachusetts while she works with severely autistic children.

With a desire to downsize and slow down, Scully sold Glidden Point in 2016. With Scully Sea Products, the retail side of her business, still under her leadership, she was soon cultivating her own oysters again on a smaller scale.

Just like she did 32 years before, Scully decided to start doing something different. 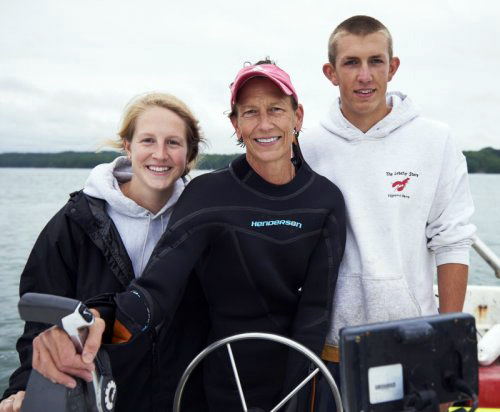 Morgan (left), Barb, and Bennett Scully on one of her boats on the Damariscotta River. Both of Barb Scully’s children gained valuable experience working for her as crew managers at Glidden Point before moving on to their careers. (Photo courtesy Barb Scully)

“When you’ve done something your entire life, it’s not because you had to, it’s because it is your passion,” Scully said.

That “something” was the Appledore, an oyster cultured intertidally with wild-set seed. Oysters cultured intertidally are exposed twice a day at low tide, as opposed to most commercial operations where the oysters are in the water and feeding all the time. This method slows down growth, producing oysters that are smaller but more plump and stronger for shipping.

Most brands across the country start with seed from hatcheries, and then they play with the flavor, size, and appearance of their oysters by farming them in different watersheds and with different methods.

For her Appledores, Scully is using wild-set seed, which means that she is collecting seed that naturally occurs in the watershed instead of buying it from a controlled environment.

“It’s a totally new game for me,” Scully said. “When you’ve already sold one business, then the pressure is off and you have the time to be able to just play a little bit more.”

With the retail side of her business, Scully also began to sell oysters from other growers in Damariscotta and other parts of the state who engage in sustainable methods of aquaculture.

“You want to support people who are doing a good job and not putting an entire industry at risk,” Scully said.

She is also trying something new by partnering with Jolie Rogers, a traveling raw bar company powered by two young entrepreneurs, Andy Rogers and Ryan Jolie. The young men help Scully with the retail side and some of the heavy lifting, and she provides them with her loyal customer base.

Throughout the summer Jolie Rogers not only offered their raw bar services at Scully’s retail front at 707 River Road in Edgecomb, but also weekly “Oysters on the Dock” every Sunday, where the pair set up a raw bar and a grill down at Scully’s pier and customers ate fresh seafood while they learned about aquaculture.

With more and more new blood coming to Maine to farm oysters and engage in the aquaculture industries, Scully said that above all an entrepreneur needs to be adaptable.

“You need to be willing to roll with it. You’ll be more likely to learn not only from your mistakes but just from what is in front of you if your eyes are open,” she said.

Scully’s oysters and other products are available at scullyseaproducts.com and find Barbara Scully’s Oyster & Lobster Market on Facebook for more information.