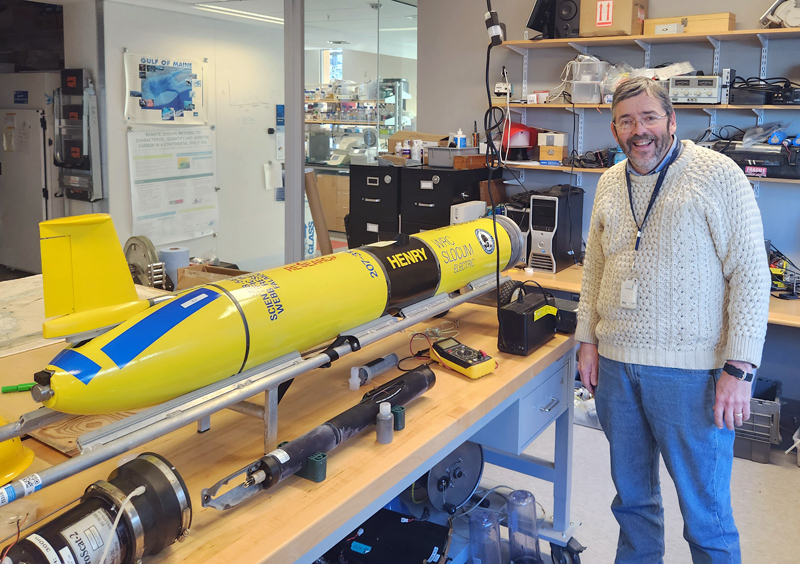 Barney Balch stands next to a submersible drone called Henry at the The Bigelow Laboratory for Ocean Sciences in Boothbay. Balch is a senior research scientist at Bigelow Labs who uses Henry to evaluate the optical properties of the ocean in the Gulf of Maine. When he is not working, Balch can usually be found bringing the music of jazz legends like Duke Ellington to stages across the state. (Alec Welsh photo)

The quest to learn something new about the ocean drives biological oceanographer and Newcastle resident Barney Balch to spend hours working at Bigelow Laboratory for Ocean Sciences in Boothbay.

“When you can answer that question, what did I learn about the ocean today, you have a warm feeling in your scientific heart,” Balch said.

Balch said one of the best learning moments a scientist can experience comes from observing the unexpected.

“There are things you do not necessarily expect you are going to find and then you have a ‘Eureka moment’,” Balch said.

Balch recalled experiencing such a moment around 2012 when he found a book full of data on the optical properties of the ocean in the Gulf of Maine. The data was collected in 1912 by Henry Bigelow, the father of oceanography and the scientist the laboratory in Boothbay is named after.

At the time, Balch was researching optical properties of the ocean in the Gulf of Maine and his discovery of Bigelow’s 100-year-old data from the exact same location could be used to compare and contrast with the research he was conducting.

“You probably could hear me hoop and hollering from here all the way from The Lincoln County News,” Balch said.

Balch began studying the ocean at the age of 14 with Bigelow Laboratory founder Charlie Yentsch, two years before the laboratory was built in 1974.

“I was willing to empty waste baskets,” Balch said. “I didn’t care what I did. I knew I wanted to work in a laboratory.”

At the time, Balch was growing up in Rockport, Mass. while Yentsch was working at the University of Massachusetts. Yentsch decided Balch could count phytoplankton under a microscope rather than empty trash cans, but first they had to address a problem. At the age of 14, Balch was too young to work at the university. To work around this dilemma, Yentsch decided Balch should create his own company.

As a ninth grader working in a laboratory surrounded by scientists passionate about their work, Balch became inspired to pursue an education in oceanography.

“It’s like being an apprentice,” he said. “It’s the real deal. You are seeing from the inside what it is like. Little by little, they take you to sea. You see what is involved, how difficult it is, and then you learn about the science.”

Graduating from Rockport High School in 1975, Balch would go on to receive a Bachelor of Art in Biology from Cornell University in 1980. Two years later Balch was working on his doctorate in biological oceanography at the Scripps Institute of Oceanography, a department of the University of California San Diego, when he met his future wife, Patricia Matrai. Matrai was also a graduate student with a focus in oceanography at the time.

After spending eight years as a professor of at the University of Miami, the family moved to Maine in 1995 and both husband and wife took positions at Bigelow Laboratory while their two children attended grade school. Matrai also works at Bigelow today as a senior research scientist emerita and interim technology officer.

Balch’s primary focus at Bigelow is studying phytoplankton, a buoyant microalga that lives near the surface of the ocean where sunlight is able to penetrate the water. His research focuses on coccolithophores, a type of phytoplankton that is one of the main sources of calcium in the ocean. His studies cover topics such as biocalcification, bio-optics, and ocean acidification, to name a few.

When not spending hours in a laboratory meticulously researching microscopic algae, Balch devotes nearly as much time to his other passion, playing and studying Jazz. A trombonist and bandleader of the Novel Jazz Septet, Balch is particularly devoted to the music of Duke Ellington and Billy Strayhorn.

“Music provides an incredible balance to ones existence,” Balch said of his passion for playing.

Inspired by the music and passionate about research in general, Balch decided to visit the Smithsonian Museum and Library of Congress to hold and study original compositions from Ellington and Strayhorn. After taking a class on how to delicately handle the historical musical documents, Balch was allowed to see the music.

“To be holding some of the most famous music these guys wrote, my hands were shaking, I kid you not,” Balch said of the experience.

Balch’s love of music predates his interest in science. He began playing the trombone at the age of 10. “I wanted to play the French horn,” Balch said. “My mother told me if I could play a trombone we had in the attic for a year, I could try the French horn.”

After a year of playing the trombone, Balch would never consider the French horn again. Balch credits his skills as a trombone player to the various mentors and musicians he had the opportunity to perform with. He has performed with stride pianist Bob Page of Damariscotta, as well as blues trombonist Jimmy Cheatham, trumpet player John Best, and bassist Al Hall to name a few.

Balch said his particular interest in Ellington and Strayhorn began during an evening performance at the Skidompha Library in Damariscotta with the Novel Jazz Septet.

“We were just having a casual performance and someone in the band suggested a song from Ellington,” Balch said. “After playing it, I asked out loud how many songs he had written.”

After a quick Google search Balch would learn the two jazz legends were responsible for over 2,500 pieces of music between them.

Since forming Novel Jazz Septet in 2008, Balch has performed dozens of concerts throughout Maine and across New England. The band’s first performance of 2023 will take place on Ellington’s birthday Saturday, April 29, at the Saint Lawrence Art Center in Portland at 7 p.m.

Balch hopes to see a hunger for live music following the lockdowns due to the COVID-19 pandemic.

“Jazz is a language, it speaks to all races, creeds and religions,” he said.