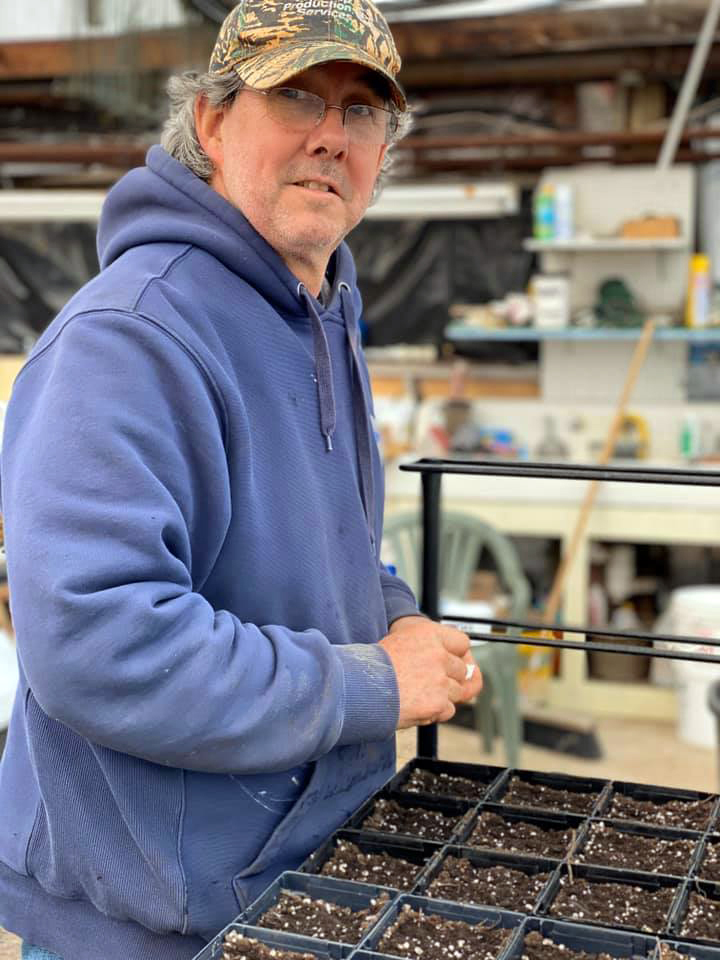 While the Damariscotta community knows Bristol’s Bill Clark as the co-founder of Pumpkinfest, among family and friends he is a notoriously zealous hobbyist.

From amateur radio operation to brewing to gardening, Clark’s hobbies aren’t extraordinary in and of themselves; what’s remarkable is his propensity to take them to the Nth degree of intensity.

“My kids would always be like, “What’s it gonna be this month, Dad?”

When he was in high school, Clark created a concert venue with amplifiers and a fully decked out control room with parts collected from the Radio Shack downtown.

“We’d practice all summer long, and at the end of the summer… we’d have all our families come up and we’d do a KISS concert,” he said. “We faked it, completely faked it. It was just choreographed… we couldn’t play a lick.”

Clark has learned to play the bass legitimately since that time.

More than a decade ago, he took on beer brewing and brought home the silver for the spice/herb/vegetable beer category at the 2010 Northeast round of the National Homebrew Competition.

Lately, Clark spends much of his time fiddling with his 3D printer. “Fiddling” means he’s printing, sanding, assembling, and even installing lights in a full-size Iron Man suit.

Clark also likes to fish, but he hasn’t taken home any accolades for that. Yet.

Clark graduated from Lincoln Academy in 1982 and has worked at Bath Iron Works for most of his professional life, but that hardly explains all he does. His claim to fame is Damariscotta’s marquee fall festival.

For 10 days in October through Indigenous Peoples’ Day weekend, giant decorated pumpkins line Damariscotta’s Main Street and well over 10,000 visitors overwhelm downtown for what has become an internationally-renowned celebration.

Pumpkinfest has featured a parade, a pumpkin-based street art show, a pumpkin regatta, a 180-foot pumpkin drop, and much more.

As much an experiment in mass and massive horticulture as it is a festival, Pumpkinfest’s inception can be traced back to Clark’s own garden bed.

A Halloween tradition in Clark’s household was to find the biggest pumpkins he and his family could to make immense jack-o’-lanterns. Around 2002, he got sick of scouring pumpkin patches and decided that he would try to grow his own gourds. Not one to do anything half-way, Clark set out to grow the biggest pumpkin he could.

That year Clark grew five pumpkins, each 200 lbs, with North Carolina Giant pumpkin seeds from King Ro Market. The next year, Clark happened upon bigpumpkins.com, where world-class pumpkin growers shared secrets of the craft and even seeds.

“I did what I could with what I knew, which wasn’t a lot,” he said.

Just a few years after planting his first seeds, one of Clark’s pumpkins broke the Maine state record at 906 lbs, if only to lose it to Maine pumpkin growing legend Al Berard 20 minutes later. 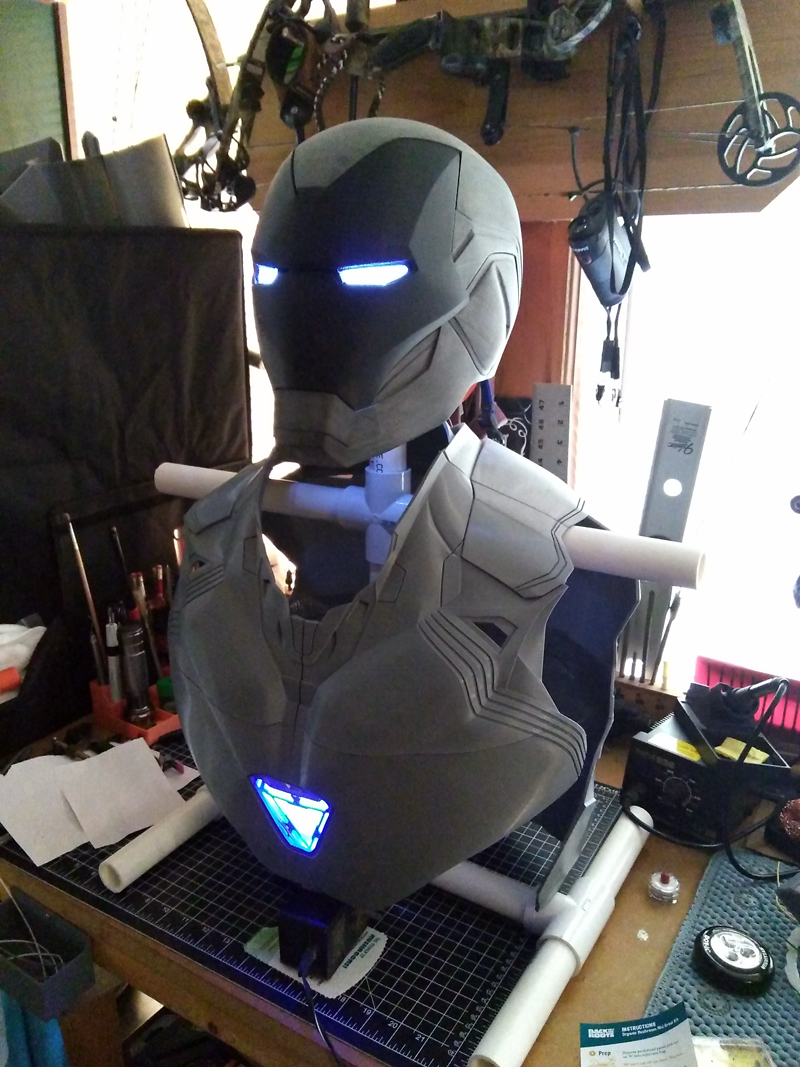 The torso and helmet of the full-size Iron Man suit that Bill Clark is in the midst of creating with his 3D Printer and assembling. (Photo courtesy Bill Clark)

It wasn’t long after that when Clark began growing with Buzz Pinkham at Pinkham’s Plantation, and pumpkins became Clark’s second full-time job.

“I think I was spending 60 hours a week on just plants, plus working full-time in Bath,” Clark said.

One day, while looking through a copy of Don Langevin’s “How to Grow World Class Giant Pumpkins Volume III,” Pinkham and Clark noticed a photo of a man travelling across a lake in a pumpkin with an electric motor attached to it. The pair was inspired to build one of their own.

The following Indigenous Peoples’ Day, Clark and a small group including Pumpkinfest co-founders Pinkham and Tom Lishness, launched their first pumpkin vessel. The next year they launched two pumpkins, and from there the regatta was born.

As the festival grew and became more organized through the years, it became the event that would draw national attention.

Even at the events’ height in 2019, Clark prided himself on an organized, year-round effort that was completely volunteer-run. Clark’s view has always been that the festival is simply a way to keep business flowing through the town after seasonal visitors and residents leave.

“The whole idea of this is to do something for the businesses to try to extend their season,” Clark said.

After nearly 20 years of giving his life to gourds, Clark stepped down from his role as a director of Pumpkinfest in 2019, but he is still around to pass on his institutional knowledge of the event and pumpkin cultivation.

“I had two options: Keep growing stupid orange things or go fishing whenever I wanted to. I chose to go fishing,” Clark said.

Clark emphasized that Pumpkinfest could not happen without the volunteers who not only help with the October event, but grow the giant pumpkins year-round and donate them.

Upon first consideration, the birth and success of Pumpkinfest may seem somewhat random, but it seems less strange in the light of Clark’s heritage.

As many locals know, Clark’s family has a storied history in Damariscotta. His grandfather and his father, both William Clark, ran Clark’s Spa out of the building that is now King Eider’s Pub.

A fondly remembered historical artifact for many, the general store sold paperbacks, comic books, stationary, candy, soda, and other goods, and was a popular after-school venue for many Lincoln Academy students.

Outside of the spa, Clark’s father spent a lot of his time investing in the community through the Damariscotta Area Recreational Alliance and he presided over the Central Lincoln County Recreation Center (which later became the YMCA). In 2015, Lincoln Academy named its newly installed turf field after him.

Clark said that his father’s dedication to the community is part of the reason he stayed involved with Pumpkinfest for so long.

“Once it got beyond pumpkins, I think that’s the reason I stayed involved, because it’s something he did. When he was alive, he was pretty tickled by what (Pumpkinfest) had become and what we’d accomplished,” he said.

With his pumpkin-growing days behind him, all that’s left is to wait and see what Clark will create next.