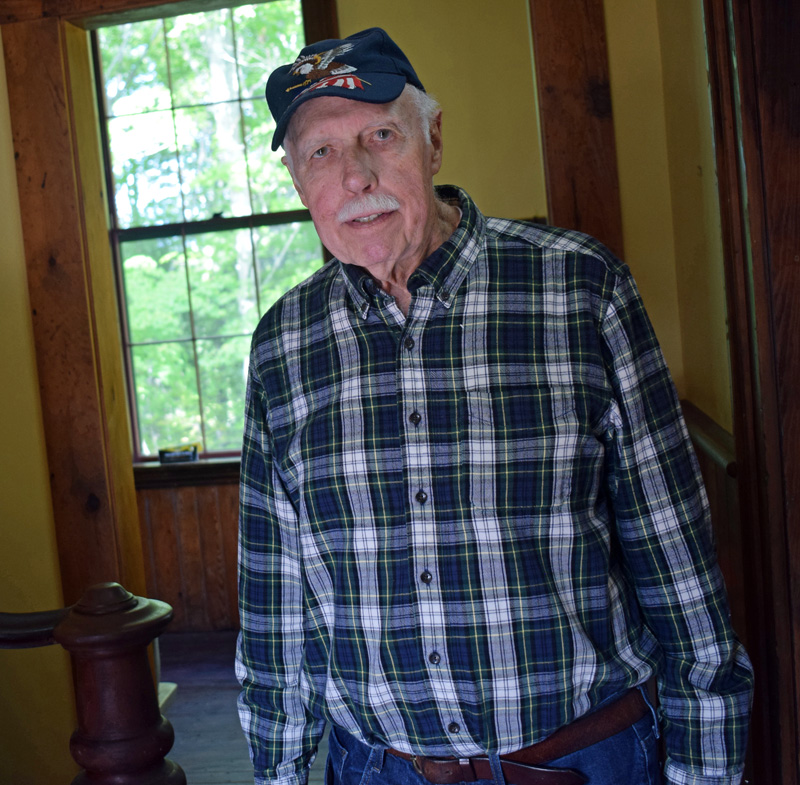 Bill Smith stands in the entryway of the restored Washington School in Round Pond. Smith, who attended the school from 1938 to 1946, helped found the nonprofit Round Pond Schoolhouse Association that worked to restore the 1885 building before it was to be burned as a training exercise for the fire department. (Evan Houk photo)

William “Bill” Smith attended the Washington School in Round Pond from 1938 to 1946 and he can now sit in the restored 1885 classroom and recall learning piano, his time as a Boy Scout, and sled-riding at recess.

During an interview on Thursday, Sept. 23 at the Washington School, Smith pointed to a 12-foot-long double-runner sled donated by Jimmy and Ernie Richards, both of whom attended the school.

“They used to bring that sled to school and ride down the hill,” Smith said.

Smith’s piano lessons from the Washington School have stuck with him throughout his life, although he can’t play much today because of arthritis in his hands.

He currently lives in Round Pond, in the same house he grew up in, and he is a sage of the village’s history. During an over hour-long conversation, Smith seemed to detail every nook and cranny of Round Pond history alongside his own.

Smith said that Masters’ Machine Company purchased the schoolhouse building from the town in 1955, one year after the school closed as students were being regionalized at a new school in Bristol Mills. Masters’ outgrew the building in 1964 and it sat abandoned for years.

The restoration of the building was sparked in 2007 when Lynn Meyer and Alexandra “Zandie” Jensen began work to create a 501(c)(3) nonprofit organization that became the Round Pond Schoolhouse Association.

The association purchased the building from Masters’ Machine for $1 before it was set to be burned as a training exercise for the fire department.

Smith was originally recruited to serve as treasurer of the group to gain approval for the nonprofit. This role fit his prior experience well as he worked most of his life doing clerical and accounting work.

Smith can’t take credit for much of the actual restoration work, saying that Jensen performed about 90% of it herself, including restoring the windows in the building.

First, the building was cleared and cleaned out, which involved 15 trailer loads to the transfer station and the removal of almost 50 large truck tires. Then the front stairway was re-installed at a cost of about $10,000. 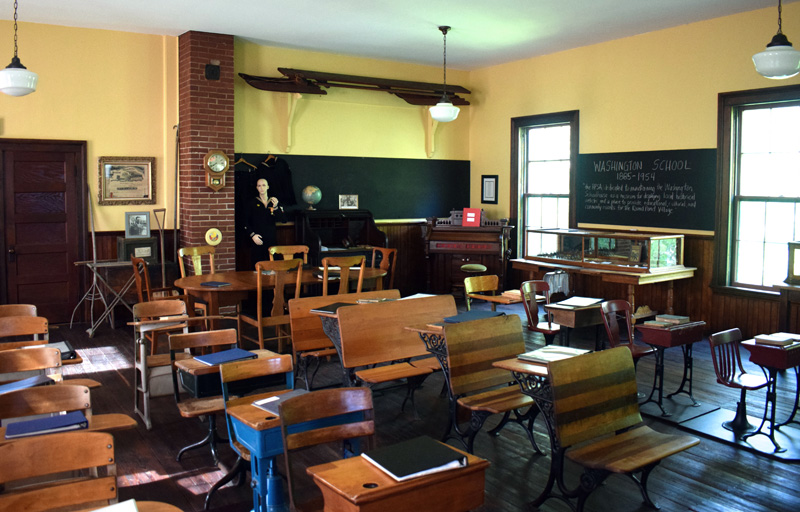 The interior of the second floor of the Washington School in Round Pond has been restored by the Round Pond Schoolhouse Association as a museum that replicates a classroom in the historic 1885 building. William “Bill” Smith, who attended the school from 1938 to 1946, was one of the founding members of the nonprofit and still gives tours of the school today. (Evan Houk photo)

The association gained momentum through generous donations, memberships, and fundraisers such as an ABC sale, attic, basement, and closet. Now, a museum is housed on the second floor where a school room is recreated and packed with donated memorabilia, including an old Boy Scout uniform, baseball pants, photographs, a restored organ, school desks, blackboards, and school books.

Smith is available to give tours of the beautifully restored schoolhouse and can be reached at 529-2008.

Smith also serves on the Village Improvement Society in Round Pond, which he said recently sold the schoolhouse’s driveway to the Round Pond Schoolhouse Association. He also served as secretary for the Round Pond United Methodist Church until it closed in June.

Smith spoke fondly of his time growing up in Round Pond, remembering kids playing cards, picking blueberries, helping to tramp down hay, and building camps out of old wood.

“You had to make your own fun,” Smith said.

After graduating from Bristol High School, Smith enrolled at Northeastern University in Boston, where he attended for almost two years before getting the call to serve in the military during the early years of the Korean War. He didn’t have quite enough credits to qualify for officer candidate school, so he took the test to see if he would be drafted.

Smith spent four years in the U.S. Navy, living at Camp LeJeune, N.C., with his wife, Marion, for a time.

“It was good for a married couple,” Smith said of the camp.

There were movies, hobby shops, fishing, and hunting. He and his wife got into making crockery out of clay and he made a bookcase there.

Smith also spent seven months in the Mediterranean region, where he was able to visit most of the nearby countries except for Spain and Israel, because of the tense military situation there at the time. 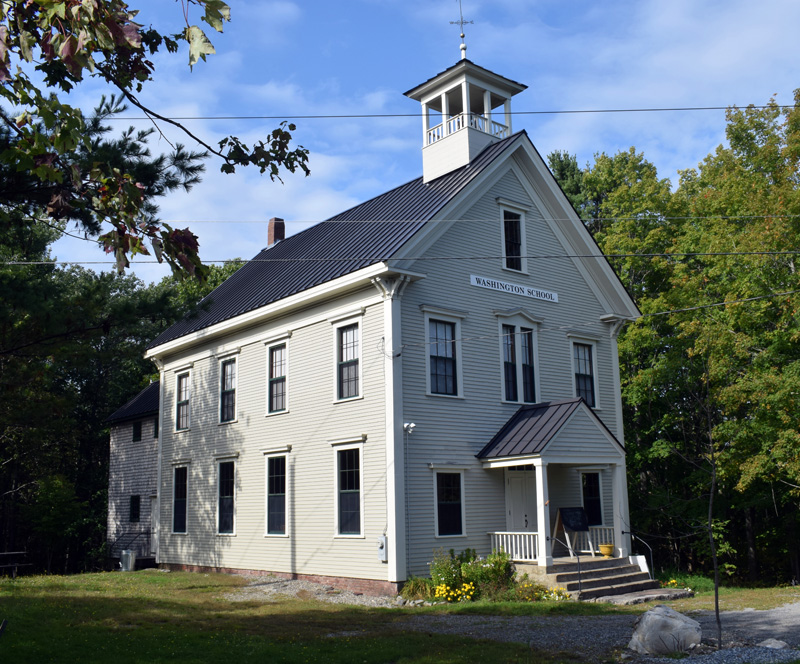 The 1885 Washington School building in Round Pond has been restored as a museum with old school desks and books. Bill Smith, a board member of the nonprofit Round Pond Schoolhouse Association, said that the Village Improvement Society recently sold the driveway to the school to the nonprofit. (Evan Houk photo)

“I wanted to see the countries and the world,” Smith said.

After being discharged in January 1957, Smith and his wife settled outside of Boston to start a family, eventually buying a house in Peabody, Mass.

He worked at an Army base in South Boston doing clerical work part time and returned to Northeastern University on the GI Bill. After 15 years of part-time and night school, Smith graduated with a bachelor’s degree in business management in 1965.

“Our supper used to be a can of hash every night. We’d get a can of hash for 13 cents and we lived on hash,” Smith said of his lean times right out of the service.

Smith did accounting work for H.B. Hood and Sons dairy trucking company at the main garage’s headquarters. He said the company had the largest truck fleet outside of post office at the time, approximately 700 to 800 vehicles.

After his wife died in 2005, Smith sold his house in Peabody and moved back to Maine after buying out his parents’ house from his sister.

Throughout his career, Smith always drifted towards clerical or accounting work. On Thursday, he said he was going to try to move a shed from his property with his son and he indicated he much prefers the office work to the construction-type work.

Although as a member of the Round Pond Schoolhouse Association, he has been a key part to making that critical construction work happen in the historic schoolhouse and saving it from ruin.