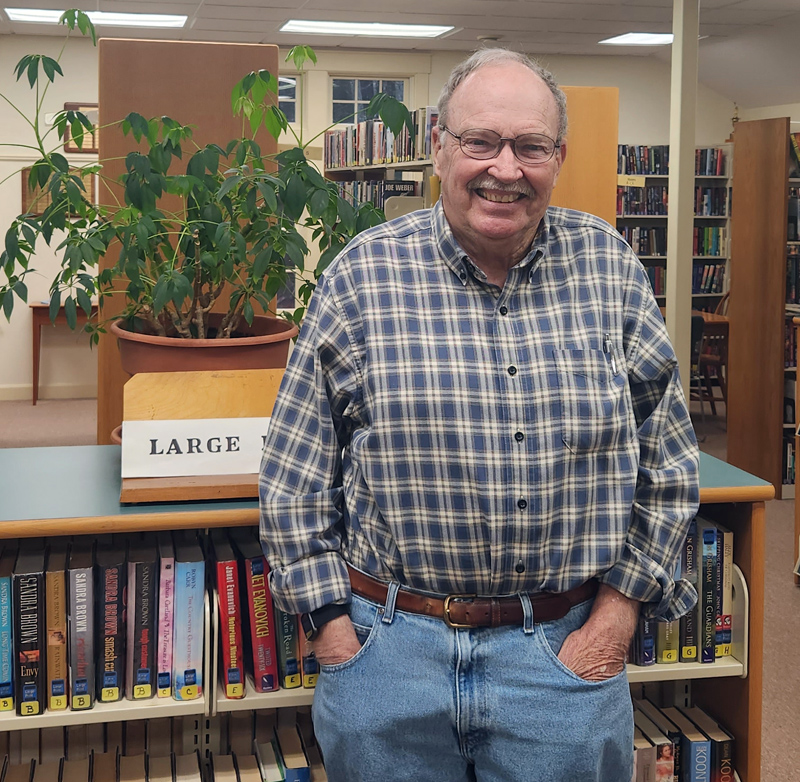 South Bristol resident Bob Emmons poses for a picture at the Rutherford library on Friday, Jan. 13. Emmons spent 31 years as an instructor at The New York State University at Cobleskill teaching students how to reduce pesticide use in crops and 13 years tutoring students at South Bristol School. (Alec Welsh Photo)

Moments before the 2002 U.S. Open would tee off at Bethpage State Park Golf Course in Farmingdale, N.Y., Bob Emmons was inspecting one of the greens when he was suddenly surrounded by federal agents with weapons drawn.

“I don’t remember if we had Homeland Security at the time or who they were but they were federal agents and they told us to put our hands up,” Emmons said.

Ten months after the Sept. 11 terrorist attack, Emmons, a South Bristol resident who holds a master’s degree in plant science from the University of New Hampshire, was hired to inspect the grass at the U.S. Open when federal agents became convinced he was attempting to plant a bomb under the green.

“That’s how paranoid everybody was,” Emmons said of the immediate post-9/11 era. “The security was astonishing.”

After some radio calls with officials from the U.S. Open, Emmons was allowed to continue his job inspecting the greens for evidence of diseases.

Two years later at the 2004 U.S Open, Emmons was almost involved in a newsworthy crash while heading to inspecting a green at the Shinnecock Hills Golf Course in New York. While Emmons was operating a golf cart in foggy conditions, a figure stepped in front of him, forcing him to make a sudden stop. Looking through the fog, Emmons realized he had nearly driven into Tiger Woods.

“He had no idea I was coming. That could have been my claim to fame,” Emmons said with a laugh.

While he spent a couple of years managing the grass of professional golf course greens, Emmons is far more passionate about learning new things and passing them on to the next generation of learners. Shortly after graduating with his master’s in 1975, Emmons began teaching pesticide use reduction at the State University of New York College of Agriculture and Technology at Cobleskill.

“Teaching is great because you get paid to learn new things,” Emmons said. “Things change all the time so you are always updating your lectures and labs.”

Interacting with the next generation of learners is another reason Emmons enjoys teaching.

“They are young, idealistic, and happy,” Emmons said. “They don’t know a lot about a lot of things but they are refreshing. It keeps you young.”

During his 31 years of teaching at Cobleskill, Emmons taught hundreds of students and still maintains relationships with some of them. Over the course of his teaching career, 10 of his former students have gone on to manage a top 100 golf course, ranked by the United States Golf Association.

As a teacher, Emmons took his job a step further, embracing the role of mentor by consoling students during breakups, or coaching them through academic difficulties.

“It wasn’t deep Freudian stuff,” Emmons said “It was similar things that you went through growing up.”

“After the war I equated lawyers with politicians and decided to change,” Emmons said.

While serving in Vietnam, Emmons was injured twice, partially losing his hearing. Unable to serve on the line, Emmons was sent to serve at the library at Base Camp in Dau Tieng, Vietnam.

“The Army only allowed books that would be useful when we got out of the Army, so we had mostly books about auto mechanics,” Emmons said.

Over 50 years later in 2015, after moving to Lincoln County, Emmons joined the board of the Skidompha Library in Damariscotta and began interviewing residents throughout the county for a radio program broadcast from the library.

“It was sort of like your ‘Characters of the County’ piece; I would take my computer and microphone and go interview people,” he said. “It didn’t really go anywhere.”

Emmons moved to South Bristol in 2006 with his wife, Holly, shortly after retirement to take care of his in-laws. Before moving to Maine, the couple spent 20 years traveling to the area for summer vacation.

“My wife would garden and I would help my in-laws out, cut some trees or build a wood shed,” Emmons said. “I had interns so I was only up here part of the summer.”

While working on his master’s degree Emmons met Holly in a biochemistry class at the University of New Hampshire.

“I fell in love and damn near almost failed the course,” Emmons said.

A year after meeting, they married in a ceremony in South Bristol.

Retiring from teaching in 2006, Emmons continued to influence younger generations of learners by volunteering as a math tutor at South Bristol School for 13 years. He said students’ difficulty with math comes from their fear and dislike of the subject, not from an inability to comprehend.

“You just have to help them get over the fear of the subject. It’s all logical,” Emmons said.

Emmons stop volunteering with the school once the COVID-19 pandemic hit in 2020.

Living in Lincoln County for the past 17 years Emmons said he fell in love with the local community after a storm in 2007 caused trees to collapse and prevented him from driving out of his yard. After the storm ended, Emmons’ neighbor, Ernie Gamage, came with a chainsaw to help cut his way out.

Shortly after they had finished Emmons asked how he could thank Gamage for his help. Gamage’s declined repayment, saying “You don’t need to thank me. We are neighbors.”

“That sums up why my wife and I love it here so much,” Emmons said.