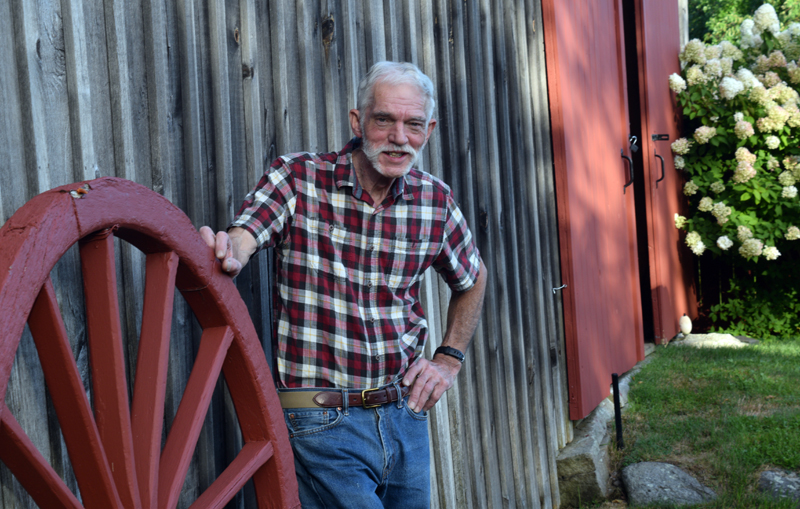 Longtime Bristol select board member and New Harbor grocer Paul Yates stands outside the restored 1700s barn that previously belonged to his grandfather, Ernest W. Hatch, on Thursday, Sept. 1. Yates said the restoration of the barn into a museum would not have been possible without the hard work and dedication of his daughter, Jessica Yates. (Evan Houk photo)

Paul Yates says he was born with a love of “old stuff” and he has worked to preserve history and the town of Bristol throughout his life.

“The old stuff has character. The new stuff, you buy it and throw it away,” Yates said during an interview outside the Ernest W. Hatch barn on Thursday, Sept. 1. “You turn on an old radio and it’s got character.”

Yates has the record for longest consecutively serving select board member in Bristol, going on his seventh term. By restoring the Ernest W. Hatch barn on Bristol Road (Route 130), just north of the junction with Route 129, he and his daughter have turned his grandfather’s barn into a museum of old farm equipment and other items of interest.

When he was 7 years old in 1957, Yates’ family moved from Round Pond to the house across the street from the barn because his mother had polio. He and his brother worked haying the fields with horses and a hay wagon for their grandfather, Ernest W. Hatch.

“Him and I were like two peas in a pod,” Yates said of his grandfather. “All we did was argue all the time but we got along the finest kind.”

Yates said he still runs five miles every Sunday in memory of his mother, Carol Yates, and her strength in confronting polio. He said she took the disease as a challenge and she “could not walk, but she could do anything else.”

“I’ve always felt so lucky that I’ve been able to walk and I always told her, numerous times, that I would always try to run that extra mile that she couldn’t walk,” Yates said.

The barn was built in the late 1700s as a post-and-beam construction, Yates said. The barn still sits on the original foundation of large natural stones placed underneath it.

Yates inherited the barn in 2016 and cleared it out and shaped it into a museum with the help of his daughter, Jessica Yates, whom he said was instrumental to the project.

The Olde Bristol Historical Society hosted a talk at the barn in summer 2017, where as much as 93 people showed up, Yates said.

“They just wanted me to keep on talking,” Yates said with a smile.

The old haying wagon, a winnowing machine for Maine wild blueberries, and a road roller are just a few of the historical items displayed in the museum.

“They used to roll the roads in the wintertime for the snow,” Yates said.

At age 12, Yates and his brother started mowing lawns and were able to purchase a Briggs & Stratton lawnmower at Renys in Damariscotta on credit for $48, paying Bob Reny back as they made money.

“Bob Reny was a nice man. He let us buy it on time,” Yates said.

Yates started working at the New Harbor grocery store, C.E. Reilly & Son Inc., in 1967 and still works there six days a week. He can be spotted in the store sporting his signature white handlebar mustache.

“It’s just a trade I’ve learned,” Yates said of staying at the store all these years. “Maybe I don’t know any different, but I do know a lot different.” 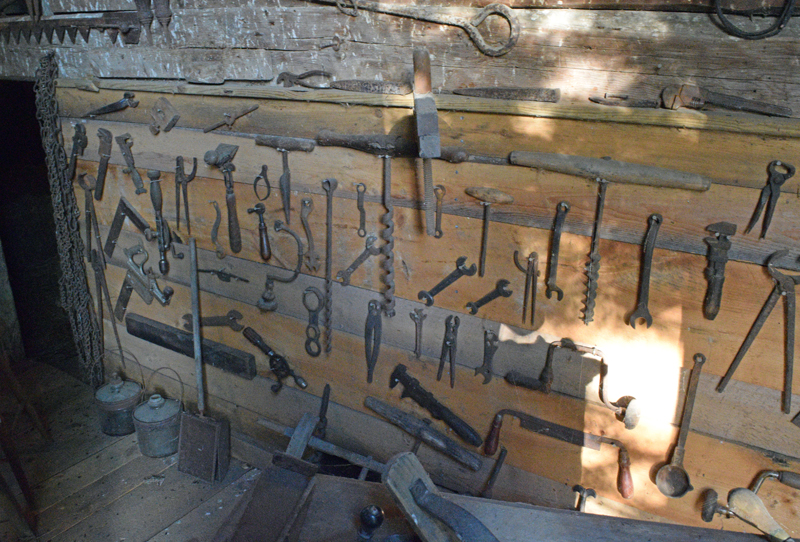 A display of old farm equipment and tools adorn the wall of the 1700s-era post-and-beam barn previously owned by Ernest W. Hatch on Thursday, Sept. 1. Hatch’s grandson, Paul Yates, and great-granddaughter, Jessica Yates, worked to restore the barn into a museum that is located on Bristol Road (Route 130), just north of the junction with Route 129. (Evan Houk photo)

There was only a brief hiatus from Reilly’s store when Yates was drafted into the U.S. Army in 1970. Because he remembered Morse code from his time in the Boy Scouts, he was immediately transferred to a Signal Corps battalion in Germany, where he managed radio and other communications.

After returning from the U.S. Army, Yates “grew my hair for a year, went clamming, and raised more hell than I can talk about,” he said with a laugh.

However, Reginald Reilly, the previous owner of the family business, set him straight when he came back to work at the grocery store.

“He was good for me and kind of corrected me to get back on the right path,” Yates said.

Yates served on the board of appeals and the budget committee before running for the select board at the urging of his mother in 2001. His mother was the town clerk and tax collector for Bristol for years, so Yates was exposed to town government and its inner workings from an early age.

During his 21 years and counting on the select board, he has always held fast in his priorities, putting the town and its residents first.

He said the value of the knowledge and the relationships made while on the select board make up for the minuscule salary.

“Kind of like Andy Griffin, you don’t go by the book, you go by the heart,” Yates said.

Yates also performed with the Bristol Footlighters, a stage and vaudeville group formed in 1953 to raise funds for schools and scholarships, for 38 years.

“The Bristol Footlighters started in 1953 and they seeded the money to build that gymnasium,” Yates said of Bristol Consolidated School where the group would perform until disbanding in 2014.

The group would plan a stage show according to a different theme every year, ranging from Western to Broadway to nautical.

“Every year was different,” Yates said.

He said the best and funniest gig he ever did was Abbott and Costello’s classic “Who’s on First?” comedy of errors routine.

The Footlighters allowed Yates another way to keep history alive and maintain its character before it is lost to time.

Yates shows the Ernest W. Hatch museum by appointment. To schedule an appointment, call and leave a message for Yates at 677-3737.