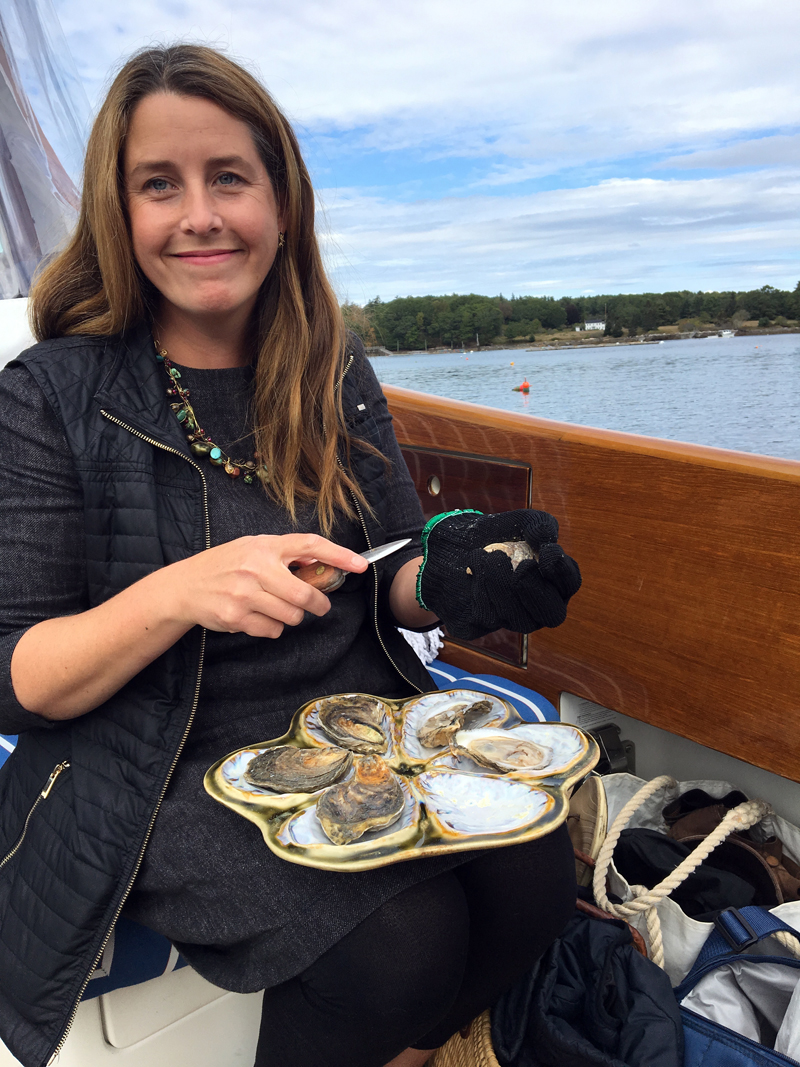 Alison Evans shucking oysters off of one of her oyster plates. (Photo courtesy Alison Evans)

In the Damariscotta River, an oyster grows from microscopic larvae – or seed – to maturity, or market size.

At Ae Ceramics, an oyster – and other sea creatures – grows from raw clay to larger than life.

Speaking over the phone on a rare weekday away from production, Alison Evans described the lifecycle of an oyster – an oyster coffee table bowl, that is – in her warehouse studio in Boothbay. It starts with casting a plaster mold, which she does in the shape of an upside-down oyster. It sits for a few days.

Then the artist begins to craft the piece.

Evans, owner and operator of Ae Ceramics, specializes in hand-molded and hand-glazed marine-inspired designs. She and her husband Chris Fritz have developed a unique, organic coastal aesthetic; woven a robust restaurant and retail market across the United States and some spots overseas; and been featured in local press and national press, including DownEast, Maine Homes, Travel + Leisure, The New York Times, and Vogue.

Now, Evans and Fritz run the business out of a warehouse studio on Route 96 and the Ae Home Store on Townsend Avenue in Boothbay Harbor, an old shingled building with honey-colored pine floors, curated home goods, and shelves full of their hand-made wares.

“I pick up the slab (of clay), bring it over to the mold, press it into the mold with sponge and water. And it’s almost like throwing I mean, because you can sort of feel all the indentations through the slab,” Evans said, explaining the oyster crafting process. “So I’m making sure I press it into all the detail of the mold.”

It dries, then, for about two weeks before being fired at around 1,800 to 1,900 degrees. After a wax treatment, the Ae Ceramics team pours glaze on the outside of the shell and paint the inside. And fires the piece again.

Evans walks through the process with ease from years of repetition. Yet each oyster – or clam, or urchin, or dinnerware from her Round series – comes out different. It’s part of the process.

“That’s another thing about caring about the environment: I don’t want to be making garbage. I want it to be successful. That’s one of the reasons I love working with organic shapes,” said Evans. “A perfectly round thing, if it warps a little bit, like, it looks wrong. But you know, an organic thing, if it warps, you don’t notice.”

Sometimes, you do notice. And for the better.

“Clay is very organic and oyster shapes are always different. And I think I liked the fact that there was – there was not like a rigidity to the form,” said Evans.

Her parents, who first spent summers in the region, moved to East Boothbay full-time when the artist was 18.

“I was born in New York, but we moved around my whole life,” said Evans. Still, she said, ‘There’s no other place in the world that I’ve spent more time in … It’s definitely a place that I’ve always felt a connection to.”

Her aunt was the first to move to the area, and her sister now owns the East Boothbay General Store. “We gravitated here,” said Evans of her larger, extended family. 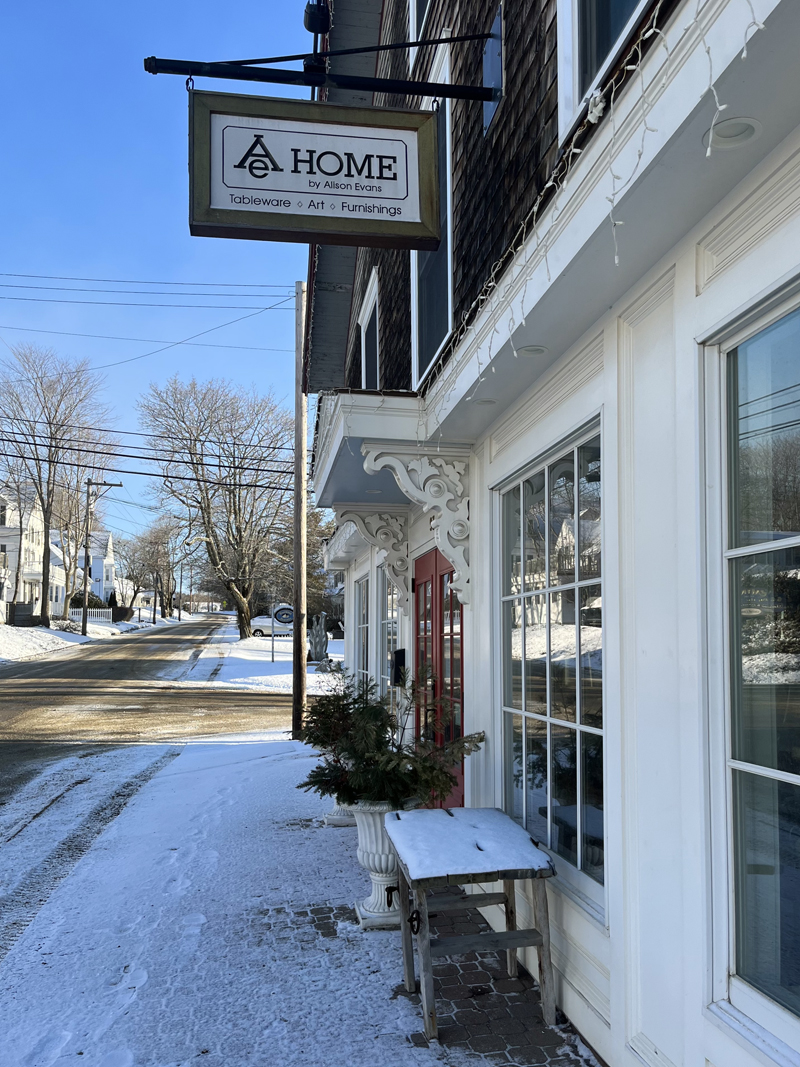 Later, after graduating from the Rhode Island School of Design and living in New York City, Evans was drawn back to the salty peninsula she had started to call home. That tidal magnetism that Maine exerts.

In the city, Evans had become disillusioned by the art industry. The scene wasn’t right for her. Plus, New York just wasn’t home. One night, she decided she would move back north. Back home to the coast of Maine. Serendipity – or fate – was on her side.

“I was living in Brooklyn, New York, and I was at a bar,” said Evans, “And I told someone that was sitting next to me that I was gonna go back to Maine and try to find a studio that someone wasn’t using.

“This kid was listening to me like, ‘Oh, my gosh, my mother’s, one of her best friends has a ceramic studio in Damariscotta.’” she said.

Evans was joyfully shocked and eager to connect with this third-degree stranger. Or friend. His name was George Mason. The kid called him up. They struck a deal.

Evans recalled the arrangement: “You can work for me, and you can use my studio. So it was great. It was like … This is meant to be.”

So she moved home. In the studio, she experimented with three series: Clams, oysters, and northern lights. Evans, a lover of mathematics and the sciences, said the northern lights theme drew from the shapes of concentric energy fields. She had found a book in the studio of an artist she once worked for, with images of the phenomenon. She said it looked like a Venus of Willendorf or a woman giving birth. After experimenting, she channeled her energy elsewhere, into something simpler, the organic – near concentric – ridges of the oyster shell. A shape, image, and history people could relate to.

“I would drive up River Road every day. And there’s a road there called Kiln Road. And then there’s Oyster Lane,” said Evans of her daily commute to the Damariscotta studio. “I always like to joke that it was like hammered into my brain that I needed to do something with oysters.”

“Oysters are loaded with cool history,” said Evans, noting the literature on the creatures, their organic form, the fact that they have been used as vessels to eat from for millennia.

Evans and Fritz have welcomed two new employees into the company recently, including one who is proving key in running the Boothbay Harbor store and another who, by Evans account, is opening up new possibilities for their thrown pottery line.

“I haven’t been able to extend that line because we haven’t had anyone on staff who’s really good at throwing,” said Evans, referring to the process of sculpting clay using a wheel. But with the new employee, that has changed.

With the extra help, ideas are fanning out like layers on an oyster shell when the growing conditions are right.

“We’ve got all sorts of really new fun stuff happening …,” she said. “This year is going to be fun, there’s going to be a lot of new fun things available in our store.”

As a business owner, Evans understands the Boothbay area’s summer appeal and the tourists who frequent her store from June through September. But the region is more than just a temporary destination. It’s her home. It informs the shapes, colors, and textures of her designs, her care for the environment, her family, her community.

“It’s the only place that has ever been a home base for me,” said Evans.

For more information and updated store hours, go to at aeceramics.com.