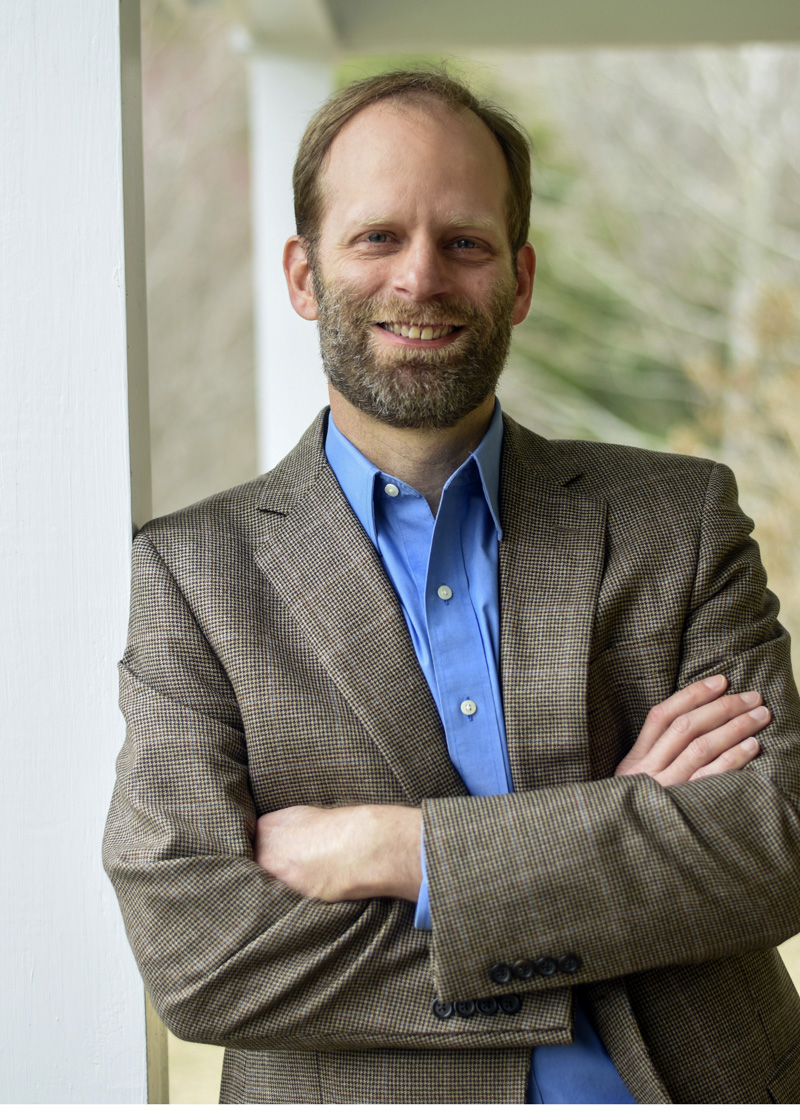 Newcastle’s Garrett Martin is the executive director of the Maine Center for Economic Policy and the coach of Lincoln Academy’s cross-country program. (Photo courtesy Jenny Mayher)

Building a community is not unlike running, in Newcastle’s Garrett Martin’s view.

“Consistency over time will get you the results, and if you start from a place of being willing to put in the work overtime you’re going to see improvement,” he said.

Martin, known affectionately as Boo to family and friends, is the executive director of the Maine Center for Economic Policy in Augusta, but to Lincoln County students and families he is better known as Coach Martin, the engine behind Lincoln Academy’s cross-country program.

The nickname has followed Martin since he was a child living in Texas with his family. His father’s name was Gary and having a Gary and a Garrett in the same household was tricky. Martin’s two brothers threw a variety of nicknames against the wall, and Boo stuck.

“You’re potentially outing me,” he said. “It almost never appears in print. I always sign my name Garrett.”

Like any good coach, Martin has a few proverbs that he likes to instill in each of his athletes.

One of them is “No passengers, only crew.” With conference and state championship titles on both the girls and boys teams, there’s no denying that Martin’s recipe for success has worked wonders for himself and his runners.

Martin is a Harry S. Truman scholar and a graduate of Princeton’s Woodrow Wilson School of Public and International Affairs. He has been a director at community development organizations in Mississippi and across Maine and he continues to lead initiatives that reduce poverty, increase access to healthcare, and promote resources that help communities thrive.

He is, to put it simply, no slouch.

“As my wife sometimes likes to joke, I’m sort of an economic justice warrior by day and coach and mentor by night,” he said.

A generation removed from poverty, Martin grew up in a small, rural community in southwest Virginia where helping neighbors was the rule rather than the exception. It is because of that upbringing that he resonated with Maine, its diverse socioeconomic makeup, and its sense of community when he first came to the state with his wife, Jenny Mayher, in 1997.

“It is just having the good fortune of coming from a place that really represented a sense of community and a sense of shared purpose even though people may or may not have been completely aligned in their philosophical or religious viewpoints,” he said. 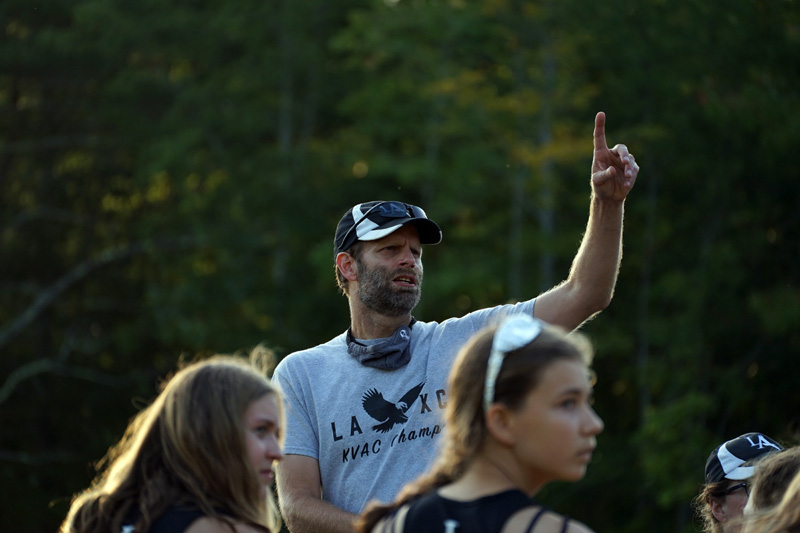 Lincoln Academy cross-country coach Garrett Martin has led his teams to conference and state championships since 2015 and was voted Maine State Cross-Country Coach of the Year in 2017. (Photo courtesy Jenny Mayher)

Martin wasn’t certain what field he wanted to pursue until he interned with the East Palo Alto Police Department in California during his time as a student at the University of North Carolina at Chapel Hill.

At the time, Palo Alto was a diverse community with lots of lower income residents. Martin spent much of his internship going door-to-door and having conversations with residents about what mattered to them in their community and how to make it a better place to live.

“I was lucky enough to have some early experiences that allowed me to really appreciate what the process of building community looks like and what it looked like when people really stood shoulder to shoulder and worked together to make a difference and what kind of role I could play in helping to make that happen. And so I got bitten by the bug,” he said.

Martin traveled to Ecuador, India, and Guatemala to gain an understanding of what community development work looked like in an international context, and he spent the better part of five years working with an economic development nonprofit in Mississippi. In 2003, he and Mayher and their children, Jojo and Essie, moved to Lincoln County and Martin began working for the Genesis Community Loan Fund.

“I was just lucky enough to get one of the two jobs available in Maine at the time and it happened to be here in Damariscotta,” he said.

These days, most of Martin’s work with the economic policy center happens at the state level, but he said that in some ways the state itself often feels like a tight-knit community.

Something that Martin often tells students when he is trying to explain the sense of community in Maine is that he has Angus King’s number programmed into his phone, and he’s sure that if he picked it up and called the senator with a question, he would answer. 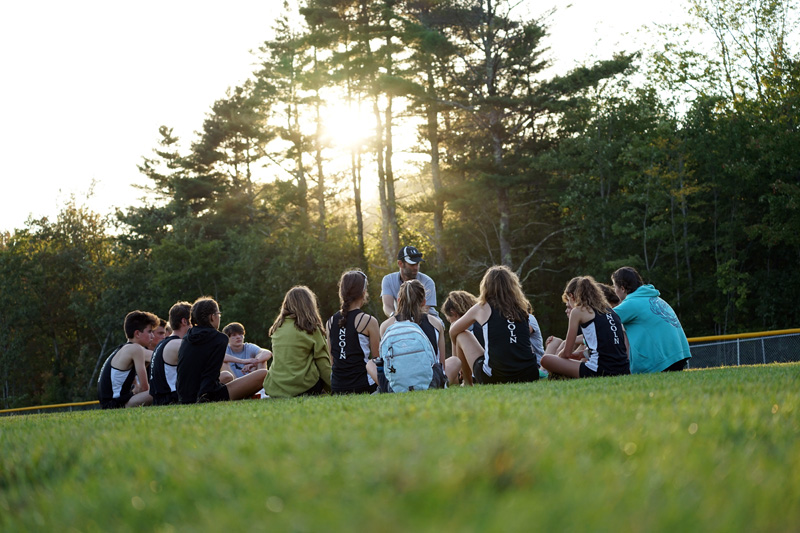 After sharing this sentiment with a variety of different groups, Martin actually found himself in the position of needing to call the senator.

“Low and behold, a couple of years ago there was an issue happening at the federal level and I thought to myself, ‘well, really, the one person who could help me understand what’s going on is Sen. King.’ And so on a Saturday morning I dialed his number on my phone, and sure enough he picked up,” he said.

With his professional life rooted in Augusta, Martin began coaching partly to maintain his connection to Lincoln County and the Twin Villages community. Martin began coaching the team in 2015 and since then the team’s roster has expanded dramatically to nearly 10% of the student population. He was voted Maine Cross Country Coach of the Year in 2017 and Kennebec Valley Athletic Conference Coach of the Year in 2019.

There are challenges to balancing a day job and coaching, but Martin said that he loves having the opportunity to see young athletes grow and figure out how he can best support each of them in that process.