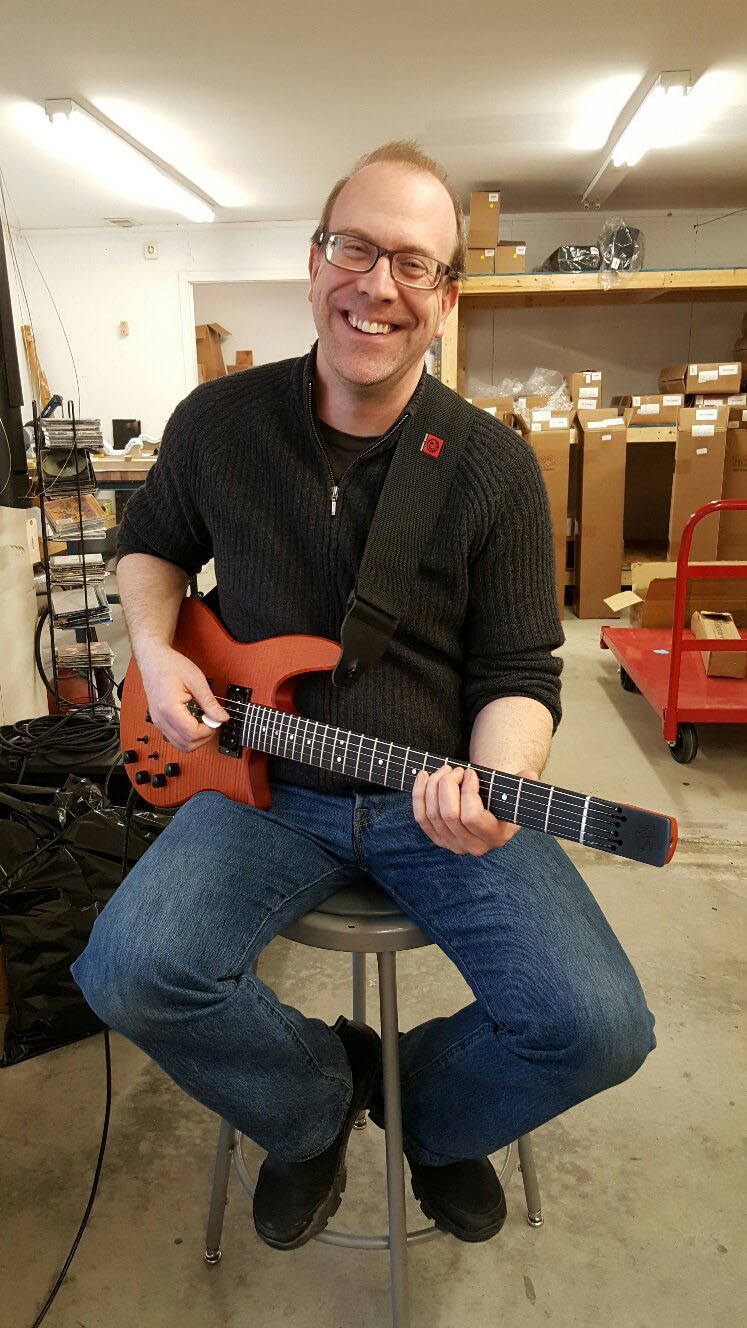 Newcastle native Corey Redonnett plays a prototype electric guitar in the NS Design office in Nobleboro. Redonnett has worked for the pioneering Nobleboro business in various roles since 2007. The guitar is based on the extremely successful line of the NS Design Radius electric bass guitars the company introduced in 2013. (Photo courtesy Corey Redonnett)

For some young musicians, ones blessed with equal parts talent and fearless determination, Berklee College of Music in Boston is the school to attend.

Some Berklee grads go on to become legends. Many go on to establish careers in the entertainment industry in some form or another. Still others, like Newcastle native and current Damariscotta resident, Corey Redonnett, make their own way.

Redonnett, whose primary instrument is guitar, said he’s never thought of himself as a performer. Inspired early on by the kind of stylized writing architects used in his sister’s textbooks, Redonnett wanted to write music.

“I wanted to be a player, and I wanted to write,” he said. “I remember going to the Al Corey Big Band and seeing 18 people playing together like that; I wanted to know how that worked. I was fascinated by it.”

Using draftsperson’s triangle and a calligraphy pen, Redonnett became a skilled copyist, to the point where he could support himself through his final two years of college creating music transcriptions for other students.

“I went to Berklee for education and performance, and after about a year I realized music education was not really my path, but that was the only choice I was given back at the time,” he said. “No one became a performer.”

Graduating from Berklee in 1993 with degrees in performance guitar and jazz composition, Redonnett pursued a professional career in the Boston area. He played in several rock and fusion bands, did some session work, wrote and recorded commercial jingles, and worked for a music publisher. Along the way, he got married and obtained his real estate license.

Hard work and networking eventually led to the biggest break of Redonnett’s performing career. In 1995, he was recommended for and obtained a full-time position with the Blue Man Group’s new Boston production.

“I was really into writing and original stuff and doing commercial jingles was fun and I was hiring my friends and I was trying to write stuff my friends couldn’t play,” he said. “So it was a good supportive atmosphere, and it was my friends who recommended me for the Blue Man gig.”

Redonnett’s stint with the Blue Man Group lasted 10 years to the day. Hired a few months before the Boston production opened, he was let go a decade later during a round of layoffs that saw a number of senior staff members replaced with less expensive talent.

“The Boston show, at the Charles Playhouse, we were an experiment,” Redonnett said, “Can we open a production that can sit down for a period of time,’ and we were told six months. Now I think they are going into their 23rd year.”

During his tenure, the performance art company morphed from an artistic gamble figuring things out as it went, to a buttoned up corporate machine churning out productions all over the world. Many of the performers in those other productions did their training on the job in Boston.

“When we started it was a ragtag team,” Redonnett said. “We were learning a lot on the fly. I had to learn to play the zither in a month. We had a book of notation that was like, I mean, the thing has got 89 strings. We had to figure out a system and we had a little composition book that people had made notes in over the years of how they played stuff. Like, you didn’t have to have a degree in directing. You didn’t have to have a theater degree from Rutgers or something. You could just work your way up through the ranks.”

Redonnett was laid off at a particularly perilous time because Redonnett and his wife had just welcomed their first child the previous year. Their son was born prematurely, but the company could not have been more supportive, Redonnett said. 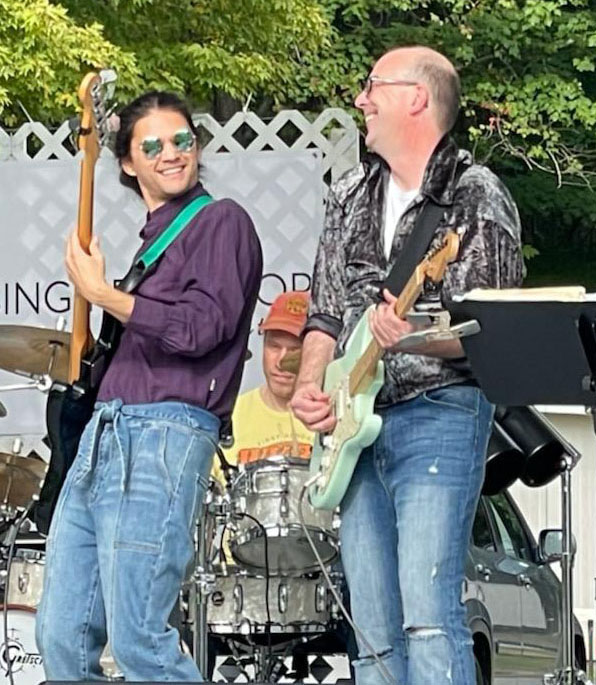 “Avery was a 26 week-er and he was in Mass General for four and a half months and Blue Man was amazing for that,” Redonnett said. “They hooked us up with an apartment next to the theater; stocked the fridge. We never paid for one phone bill. My wife could walk across Boston Common and go to Mass General, and go for a visit and the support I had from the company: I do two shows, get out at midnight, take shower and go to the (neonatal intensive care unit) at 1 o’clock in the morning and I would kangaroo with Avery.”

In 2004, early in what would be his final year with the Blue Man Group, the Redonnett family moved to South Bristol, having already left Boston for Salem, Mass. Redonnett said Salem felt better than Boston, but South Bristol felt better still.

“I’m a hick from Maine,” Redonnett said. “When I moved back, I took a month to renovate our house to move into, to fix some things. It was something that was incredibly peaceful, that I hadn’t felt like that for a really long time. It felt right. I didn’t know how much I needed that, until I found it again.”

Living in South Bristol, Redonnett commuted to Boston to work. At that time the Boston production was doing nine performances a week, including two shows on Fridays and Sundays and three on Saturdays. Redonnett would make the approximately 180-mile, one-way drive on Friday mornings and perform the weekend’s slate of seven shows.

As described by Redonnett, working for the Blue Man Group was much more grind than glamour, but it was a good position with benefits and he was shocked to be laid off seemingly out of the blue in 2005.

“It was difficult, but sometimes life gives you messages and maybe it was a time to recalibrate and adjust what my focus was, but I was in tears on the whole drive home,” Redonnett said. “They were very nice about it. They provided health insurance for a long period of time. Yeah, I was blindsided, but so was everyone in the company. A year later, they let hundreds of people go and it was a whole restructuring.”

Over the next five years, Redonnett managed his father’s flooring business, taught some guitar students here and there, got divorced, bought a house in Damariscotta, and slowly began to immerse himself into the burgeoning Twin Villages open mic scene.

Nurtured carefully by its participants over the last 10 years or so, open mic nights are a now popular local attraction for musicians and artists. In the summer the stage sets up at Schooner Landing on Thursday nights. When Schooner closes for the season the production moves up the street to the Oysterhead Lounge at the Newcastle Publick House on Friday nights. 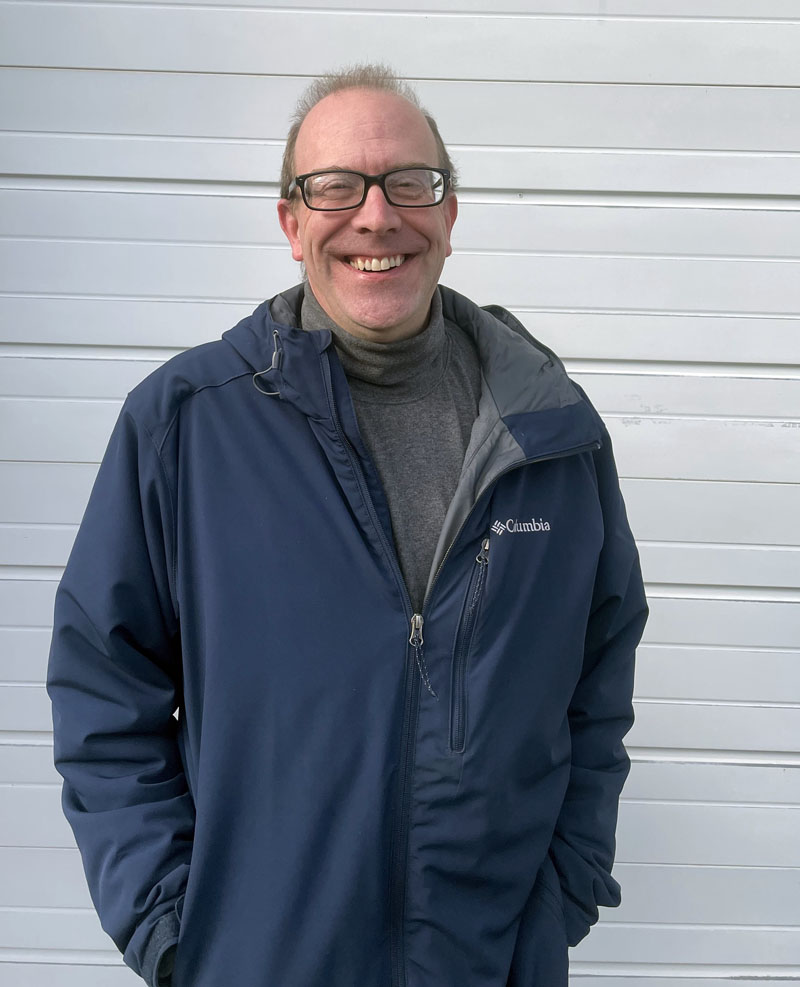 Corey Redonnetts lifelong obsession with music has taken him to big stages and back home again. The Berklee College of Music graduate said he has made some of the most satisfying music of his life in recent years on local stages with local musicians, many of whom are former students and are now friends. (Sherwood Olin photo)

“They invited me in just amazingly well,” Redonnett said. “For me it’s a release. It’s fun. My friend Griffin Han Lalime was mowing my lawn at the time (2016), and I was like, ‘yeah why don’t we do a tune’ and Ben Chute, my student, was a big part of that scene, and we started learning three songs a week.”

Lalime and Shute would both go on to play with Redonnett and others in various lineups. Redonnett said playing with younger musicians and helping them gain experience onstage is one of the most satisfying things he does.

In recent years Redonnett has gone to work for pioneering musical instrument designer Ned Steinberger at Steinberger’s Nobleboro-based company, NS Design, which produces electric stringed instruments. Redonnett currently works as the artist relations manager and he produces the company’s appearances at the half dozen or so trade shows the business attends each year.

Most recently, Redonnett has been lending his talents to support The Peace Gallery, a nonprofit community resource wellness center in Damariscotta. On Tuesday nights, Redonnett has been assisting with a songwriting class for veterans and their families, arranged by local author, educator, and activist Ron Capps.

“I teach a couple people beginner guitar,” Redonnett said. “We’ve had a couple people come in and play songs for us, and bring in songs in progress; people who maybe don’t know how to play an instrument; maybe we put the right chords or whatever to their poetry.

“It’s powerful. It’s very powerful. I didn’t really know what I was getting into but I wanted to help Ron, and I love Bernie (DeLisle) and everything is done with the community. Yeah, it’s powerful. There are nights when I have to go sit, like for an hour … Being able to talk about things is good too, but processing it is something, maybe we all don’t take enough time to do that.”