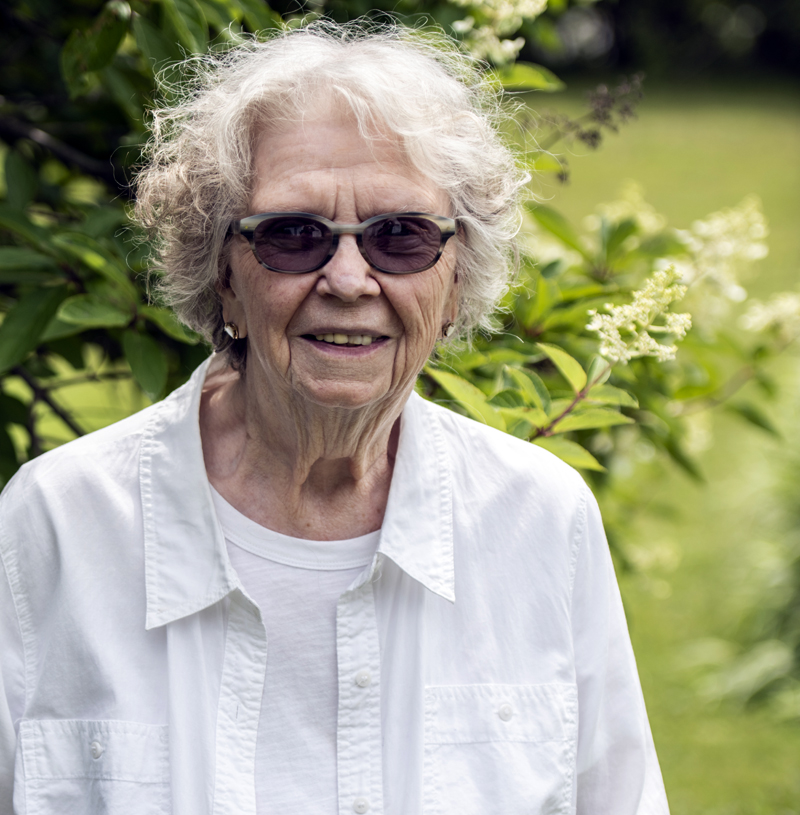 Ernestine Peaslee knows a lot of people in Somerville. She was the town clerk for 30 years and got to know her community over the counter as she registered vehicles and issued licenses for marriages, dogs, fishing, hunting, and snowmobiling.

Peaslee can be found on Sundays, summer or winter, engaged in a card game with friends somewhere in the town of Somerville. Rummy, 63, and Sevens are among her favorites. Which game did she play? She played rummy at the Pumpkin Vine Farm during this year’s Open Farm Day. And she is quick to proclaim that she won.

Peaslee was born and grew up in Somerville and has lived most of her life there. Her father was the town’s road commissioner, and her mother a homemaker. Peaslee, now 87, was the last of six children, born when her mother was 45 years old.

There were always lots of kids around while she was growing up. One nearby family had 14 children, she said. Seven boys and seven girls. “We’d visit back and forth, mostly in our neighborhood, go on picnics, go to the fair.”

“We used to go sliding, skiing, and skating. We did a lot of skating in the winter – on any piece of ice we could find. I loved it. I could skate backwards. I can’t do it anymore, but it was fun.”

“In the summer, we would get together and play ball or watch the boys play ball. We didn’t think anything different about it. It was life.”

Peaslee and her friends would often walk to Brown’s General Store to get a soda. That’s where Peaslee met famed photographer, writer and filmmaker Gordon Parks.

Parks is listed among the great photographers of the 20th century. He was known for documenting American life starting in the 1940s.

Much of his work was urban, centered on poverty and civil rights, but in 1944 Parks was sent to Somerville by Standard Oil to photograph the small town where Brown’s General Store sold Esso gasoline.

“Everybody just marveled at seeing him in Somerville,” Peaslee recalled. “(He was) a very slow moving man. He didn’t come in here and rush and think he was going to take over and do this and that and something else.”

That deliberate approach came through in the photographs he took that winter. The Gordon Parks Foundation describes the images as “suffused with a sense of cold and calm, befitting the conditions of Somerville.” 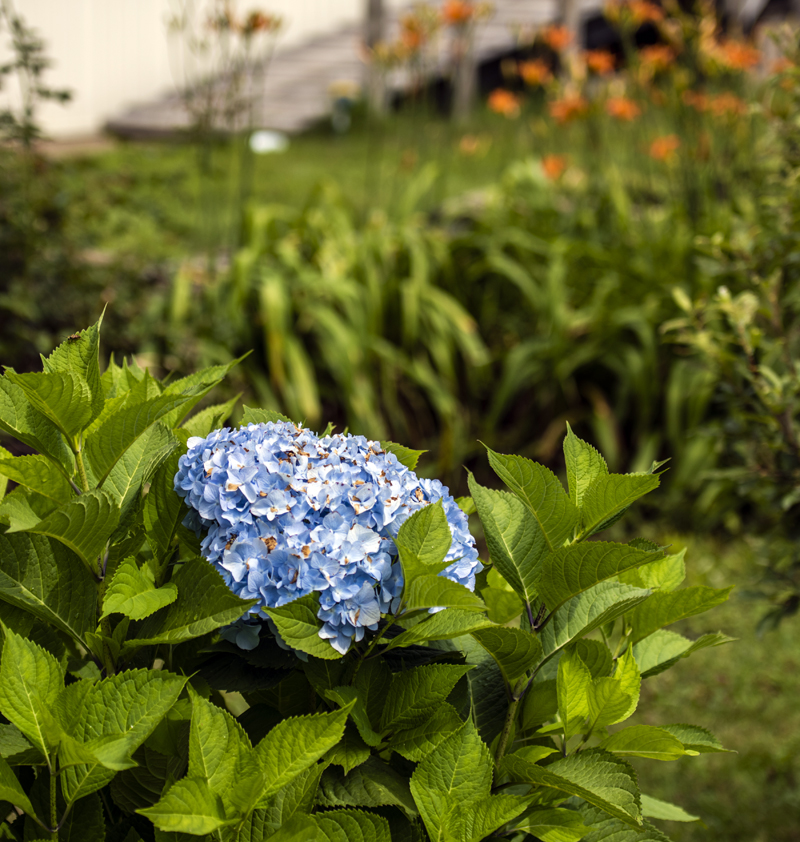 Peaslee was young at the start of World War II, but she remembers it. “My brother had to go in. He was in Germany. Of course, we missed him.”

“There was a lot going on then, just like now. It was big. We didn’t know what was going to happen, if people were going to lose their jobs. Because a lot of them went in the service,” she said.

Peaslee attended the Somerville Corner School, one of eight schools in the small town at the time. She continued her education at Erskine Academy in China, ME, where she boarded, sharing a room with one other girl at a cost of $3.50 a week.

“It was nice living there,” although the boarders were still expected to help with the cooking and cleaning, she said.

After she graduated, Peaslee attended a commercial school on Water Street in Augusta for just a year before she was recommended for employment.

“They needed somebody at the bank. They told me to go over and try out and see if I could get it. And I did.” She worked at Augusta Federal Savings Bank for 28 years. “You start out as a teller and at the end I was head bookkeeper so that worked out alright.”

Peaslee lived with her sister in Augusta, but when her sister moved she returned to Somerville. “I came back and I thought, ‘what am I going to do now?’”

She stayed home to care for her mother, worked for gift shops in Augusta and Camden until the shops closed. She dipped her toe into substitute teaching for schools in Jefferson, Windsor and Somerville, but she needed a steadier income.

One of her sisters had been the Somerville town clerk. “After she retired, I got that job.” She stayed in the position until 2013.

Peaslee worked in the town office five days a week. She would go in, get the paperwork ready for people who needed licenses, and give them a call. “I’d go in on a Saturday if someone needed something.”

She took notes at selectmen’s meetings and said the selectmen often stayed “like I did.” She never thought of going to another town.

When she started, it was just her and a treasurer who took care of everything. But she noted that “there are a lot more people now and a lot more moving in.” 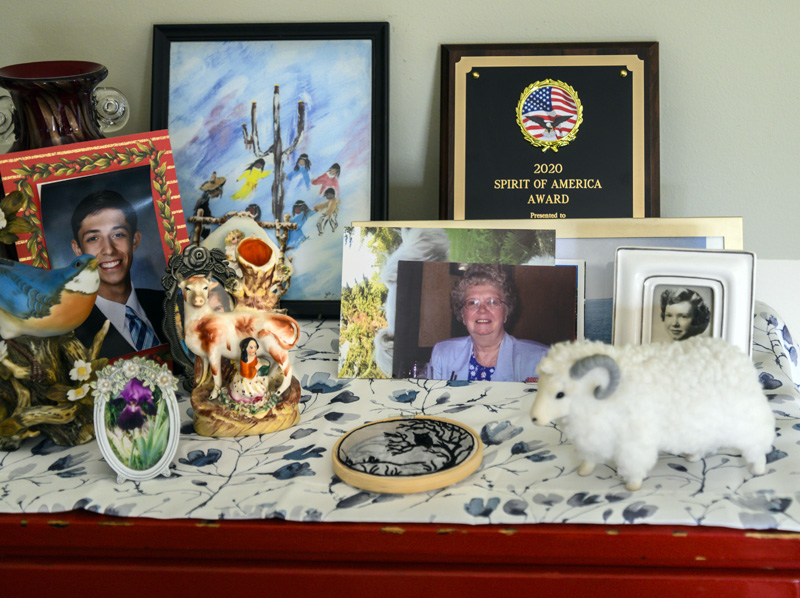 There have been four or five clerks since Peaslee. She thinks the position was perhaps not what they expected. Or the drive to Somerville was too long.

Nowadays, Peaslee draws a little, paints a little. She wants a small dog to keep her company, “but you know you can’t find a little dog anywhere – I’ve tried everywhere.”

And she plants trees and flowers in front of her small home. She likes hydrangeas. She has a tree filled with white flowers that will soon bloom pink at the ends. Her favorite is a hydrangea bush with a large globe of periwinkle blue petals.

Peaslee received the Spirit of America award this year for her volunteerism. According to First Selectman Chris Johnson, “Ernestine has always given generously of her time and energy for the town. She grew up here and is part of the social fabric of the community.”

Peaslee said being Somerville’s town clerk was her favorite job. “I knew all the people and to this day they know me. I would do it right now if I could.”

The photos taken by Gordon Parks in Somerville can be viewed at gordonparksfoundation.org/gordon-parks/photography-archive/hercules-brown-1944?view=slider#3.