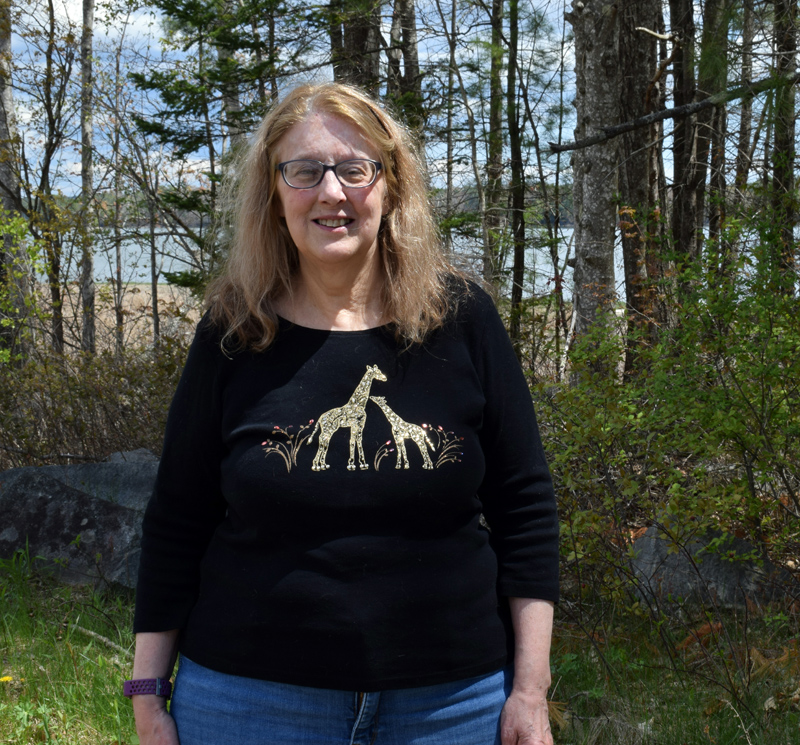 Laurie McBurnie stands in front of Great Salt Bay on Monday, May 10. McBurnie has spent her life working with children and is actively involved in the Nobleboro Cemetery Committee and the Nobleboro Historical Society. (Evan Houk photo)

Nobleboro resident Laurie McBurnie has spent her life dedicated to both honoring the past and preparing children for the future.

As a longtime appointee to the Nobleboro Cemetery Committee, McBurnie has written about every one of the town’s 85 cemeteries, detailing family histories and inventorying the graves in columns for The Lincoln County News. The columns were eventually collected into a book, “The Cemeteries of Nobleboro, Maine,” that was released in 2018.

After initially drawing from Nobleboro historian George Dow’s cemetery summaries, she soon realized that was not enough to whet her appetite for local history.

“That didn’t even last for one article because I got so fascinated with it,” McBurnie said during an interview on Monday, May 10.

She is also an active member in the Nobleboro Historical Society and is heavily involved in AppleFest, the society’s annual fundraising event.

McBurnie has been a teacher at Lincoln Academy, worked at a private summer camp for girls in East Monmouth, has adopted and raised a daughter, helped to raise three foster children at different times in her life, been a longtime volunteer for the Girls Scouts of America, and currently is helping to watch and raise her 1 1/2-year-old granddaughter.

McBurnie said that the most rewarding parts about working with children are “seeing what they can go on to do, how they develop, and get them headed in a good direction.”

She said she has witnessed this development in former students who have gone on to become teachers themselves and in former Girl Scouts.

“Every time I see her she gives me a big hug,” McBurnie said of one former Girl Scout. “She has girls of her own now.”

McBurnie was a Girl Scout herself and became a troop leader while her daughter and foster kids were growing up. She then began coordinating product sales, like the famous cookie sale, for the local area.

McBurnie was born in Boston and grew up in the suburbs of the city, mostly in Milton.

She attended Wellesley College, majoring in Latin, which she took in high school and developed an interest in.

“I just like languages,” McBurnie said. “My mind’s mathematical, so the analyzing and all of that fit right into the way my thinking process goes.”

She then went to graduate school at The Ohio State University before going on to teach at private schools in Connecticut for five years.

“Maine was kind of in my heart. So when I was looking around to teach elsewhere, I looked north,” McBurnie said of finding the job at Lincoln Academy, where she taught mathematics, Latin, French, English, and mythology for eight years.

She said sometimes during summer camp, the group would take the kids to Pemaquid Beach and she would fantasize about living on Bristol Road, where she first stayed after moving to Lincoln County.

“I used to be riding in the bus on Bristol Road, saying, ‘I’d love to live on this road,’ and I did,” McBurnie said.

She then moved to Nobleboro, where she has lived since the mid-1980s.

In 1995, McBurnie was looking for something new and saw an ad in the newspaper to work at Lincoln County Publishing Co., which publishes The Lincoln County News.

She first worked setting ads before moving onto various types of job work — any printing work that is not the newspaper — and setting the pages for the newspaper.

“What I have always liked is it’s so different every day,” McBurnie said.

Through Chris and Paula Roberts, McBurnie learned about the Grange charitable fraternal organization and joined Willow Grange No. 366 in Jefferson in 2000.

“Initially it was set up to help the farmers right after the Civil War,” McBurnie said of the Grange. “Today, there’s a lot more going toward community service.”

The Grange is where she first became involved with her cemetery work, cleaning up cemeteries every year in Nobleboro.

Through her years of research work on the cemeteries, McBurnie found a few “extremely distant” relatives in Nobleboro whose ancestral connections date back to the Mayflower.

Since retiring from the Lincoln County Publishing Co. in 2019, McBurnie has been enjoying spending more time with her granddaughter and her daughter and son-in-law.

“There’s something new every day with them, especially at that age,” McBurnie said of her granddaughter.

She said one Friday she left, came back on Monday and her granddaughter “decided she was no longer going to crawl, she was going to walk.”

“So I come in Monday for her birthday party and she’s just walking all over the place,” McBurnie said.