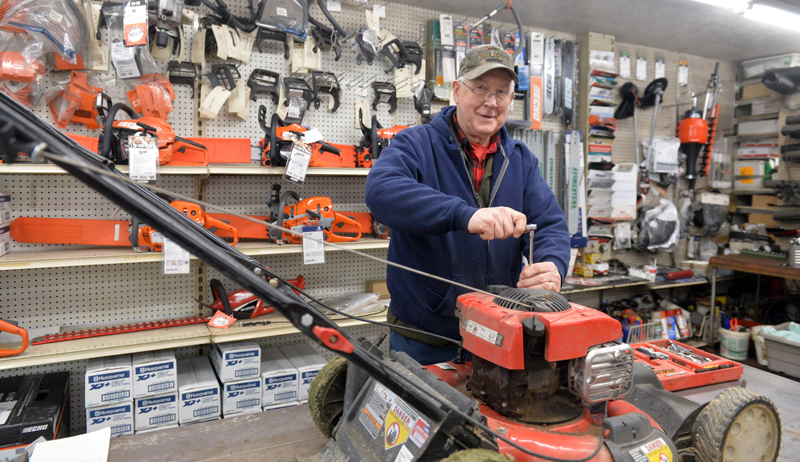 Dick Chadwick at work in his Nobleboro shop. Chadwick will hang up his wrenches at Chadwick’s Power Products on March 31 after 45 years in business. (Paula Roberts photo)

Dick Chadwick will be hanging up his wrenches on March 31 after 45 years at Chadwick’s Power Products in Nobleboro.

At 76, Chadwick said he is not retiring, but going to be doing something different. He is hoping to help his son Jon with his excavation and logging business.

“As long as he can tolerate me,” Chadwick said with a grin.

Chadwick was born in Friendship and grew up in Thomaston. He put himself through college lobstering in the summer. After graduating, he took an industrial arts teaching job at Lincoln Academy. He worked at LA for 26 years.

While working at Lincoln, Chadwick started his side business at his home in Nobleboro. He worked after school from 3:30 to 9 p.m.

“There is an overlap there, otherwise I would be 110,” Chadwick joked about working two jobs.

At the time he was hired at Lincoln, there were job opportunities in Florida and Gorham. Chadwick made the decision to work at LA, a small school. “I looked at all the opportunities. I went to LA right out of college,” Chadwick said.

“I thought I had a lot in common with students in the area and could relate with them. That helps with working with students. I would not want to be in a city. I am old fashioned,” Chadwick said.

Chadwick had an excellent rapport with his students. He had one student tell him he was more like a father to him than his real father. Another young man asked him to stand up with him at his wedding.

A lot of his former students became loyal customers. Chadwick never beat around the bush – he was always honest with his students and was never shy on giving them advice or his opinion when they acted out.

One former student turned customer came into his shop recently and Chadwick asked him how someone who misbehaved so badly in high school could turn out to be such a nice guy.

The student’s reply was, “I guess I just needed to grow up,” Chadwick said.

Chadwick helped a lot of youth in his years at Lincoln Academy find their way and grow into productive workers.

While teaching there, Chadwick was department chairman for several years, and head of the industrial arts department. He built the trophy case in the gym lobby, and helped build the chair storage carts that were stored under the stage in the gym.

Neil Ward owned land in Damariscotta and allowed Chadwick to put a trailer in on his property. Chadwick and his wife Jeannie, of almost 56 years, have lived in Nobleboro for the past 50 years. They have two children, Jon and Lynn (Farrin).

Chadwick said he was “itching for something to do” in his spare time.

“I am restless and cannot sit still, never could.” He said he would drive by old broken down snowmobiles, buy them and fix them up, and then sell them to “make a few dollars.” He worked out of his garage that he built to house his tractor and boat.

From there he started working on small engines and the business bloomed. “One day a guy stopped in from a dealership. He wanted me to be a yardman dealership. He told me if you sell anything send me some money.”

The first two items Chadwick sold were out of a catalog. He sold lawnmowers, tillers, snow blowers, trimmers and generators over the years.

Although the business’ “real product emphasis” is on Echo trimmers and Husqvarna chainsaws, Chadwick has repaired almost everything.

“Except Stihl. Damariscotta Hardware does them and I do not need to take business away from them,” Chadwick said.

Chadwick said when he was teaching and running his side business he “should be a multi-millionaire, but I am not. I always prided myself in treating customers fairly and not over charging them. I always said we had to be friends first, and then we could do business. I have a ton of wonderful friends. I am going to miss it.”

He said it was toughest making money in the lawn and garden department. “I should have more money in the bank than I do. I attribute it to understanding people’s needs in the community. A lot of people still cannot afford (the cost of repairs).”

Chadwick said the main reason he is closing his business is because of his age (76) and some health issues, including a type of leukemia. “It probably will not kill me, but it compromises my immune system. He and Jeannie and work crew recently recovered from COVID. He and Jeannie had an infusion and “got off very easy.”

He also said the lack of help is another reason for closing up shop, as it is getting more and more difficult to get people interested in working on small engines. He currently has two employees – a man “a little younger than me and a young lady who does ordering. She is a gal Friday and is not afraid to get her fingers dirty. She has done a good job for me.”

He is not shy on giving his opinion on high schools offering an industrial arts program. He sees a real need in the community for students to learn safety, as well as how to operate hand tools and equipment to fill vital jobs.

Although the business has been open five days a week, Chadwick finds himself working in the shop seven days a week.

“Even now I am out there doing something on Sundays,” he said, “I spend half a day getting ready for Monday,” and do billing for Husqvarna. Jeannie has done most of the bookkeeping over the years.

“The vast majority of customers have been wonderful people and have supported me for 45 years. It is like a big family to me. It has given me pleasure to fix things for them,” he said.

Since announcing he was closing a couple of weeks ago many people, including former students, have stopped by and wished Chadwick well. He has held his customers comments close to his heart for 45 years, and the goodbyes he has had recently even more so.

Customers’ comments such as their repaired equipment “works better than new” and “what are we going to do without you” bring him much joy and pride.

What’s next for the Chadwicks?

“If I get so I am feeling better, I would like to get in one more trip to Hawaii,” he said. They have traveled to Hawaii 10 times over the years.

“The stuff you see is so educational,” Chadwick said of the volcanoes, lava and natural beauty. “They call it paradise, and that’s what I call it.”