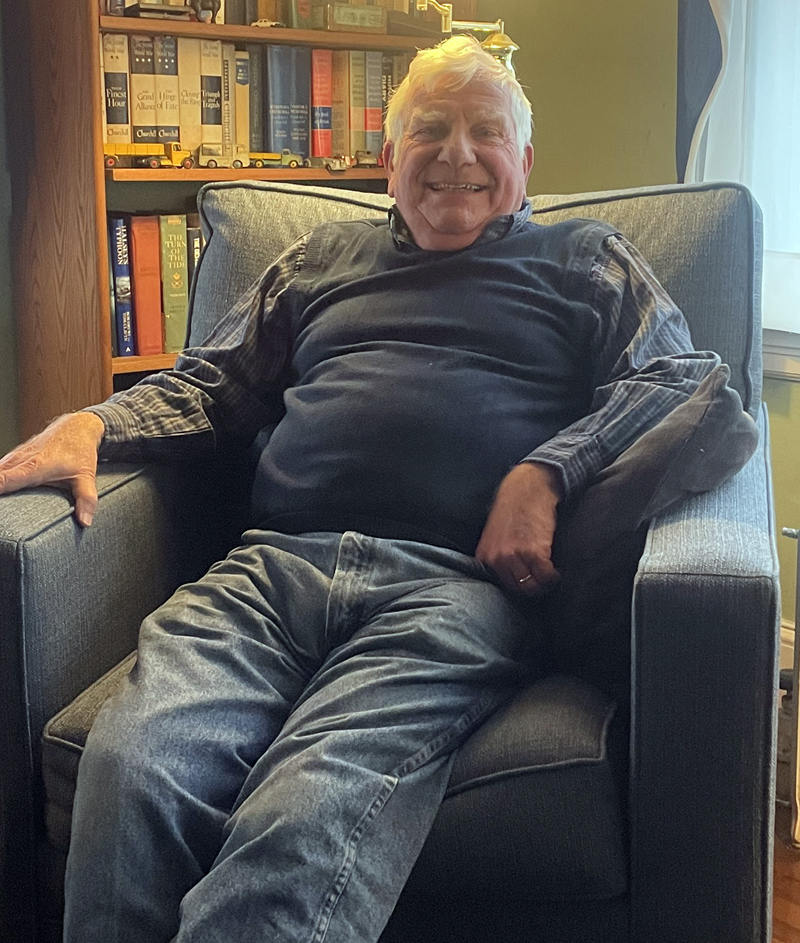 There was a time when Richard J. “Dick” McLean was a fixture in the Damariscotta community. While he was in office, the one-time long-serving select board member made it a point to be visible in his community, stopping downtown daily to check his mail, grab his coffee, and really, chat with his neighbors.

He’s 81 now, a little less publicly active than he used to be these days, but he still enjoys his neighbors. He still loves a good chat, and he still talks about Damariscotta with the fondness of a native but for all that, McLean is “from away.” The retired businessman is a Mainer by choice.

McLean was actually born in Boston. A self described orphan, he was given up for adoption at birth and raised as a ward of the state. He was apparently well cared for, he said, as he was told he could read, he knew all his colors and he could count to 10 by the time he was adopted at the age of 2 1/2.

“Mr. and Mrs. McLean, Mac and Rita,” Dick McLean said. “God bless them. Best parents a guy could have ever had.”

McLean was born with serious health issues that he learned later ran in his biological family.

“I was born with three kidneys and two of them weren’t working,” he said. “They were no good.”

He was very happy with his adoptive parents and had no particular interest in connecting with his birth parents. Primarily motivated by medical reasons, he submitted a DNA sample to ancestry.com.

“I never had a need to look for my birth parents,” he said. “I know some people feel that very strongly, but no. I had parents. I had a mother and father.”

Through ancestry.com, he connected with his birth mother’s family via a first cousin.

“She had done what she thought was a very, very thorough family tree,” McLean said. “Everybody was there. She knew everyone. There were no voids, and then there was this guy.

“There was an aunt who was living down south someplace, who knew everything about the family and they called her up and they said ‘we got this; what is this?’ And she said, ‘oh my god, it’s the missing baby!’ So, who am I? I am the missing baby. I think that is kind of fun: of all the things I have accomplished in life,” McLean said.

The cousins are connected through their grandmother, who had two husbands, producing six to eight children in her first marriage and 11 during her second. McLean’s father is from the second marriage. It is nice to learn of his biological family and even meet some of his relatives, but McLean said he is a McLean to his core.

“I’ve been to a cookout with a dozen or more of my mother’s side of the family,” he said. “Interesting … I don’t feel any particular emotional attachment whatsoever. One of them at one point said it must have been so hard growing up without a family. I said no. I have a family. I had cousins, aunts, and uncles, all wonderful people I grew up with.”

McLean, his wife of 55 years, Patricia, and their two sons, Chris and Tim, arrived in Damariscotta, moving from Stamford, Conn., in December 1984. By then McLean had spent the first part of his career as a middle manager and salesman for various companies. He spent 12 years on the road, traveling every other week, servicing a territory that stretched from Kentucky to Quebec.

Prior to moving to Maine, the McLeans had vacationed in Maine for years, beginning as children with their own parents and later, after meeting on a blind date, as their own family unit. They knew they wanted to move somewhere in the Midcoast and they spent a significant amount of time looking for a home before moving quickly when they found their current home on Water Street.

“We found an opportunity here,” McLean said. “I went into a partnership with Dana Tavares and we bought Robinhood Woodworks, so that brought us here.”

Based in Newcastle, with Tavares overseeing production and McLean handling business operations, the company did well for a few years and was just picking up steam when the unexpected bankruptcy of their single largest client broke the business in late 1986.

At the time, the client, Sugarloaf Mountain Corp. was embracing the condominium concept in a big way and Robinhood Woodworks produced a good deal of furniture for the early effort. Tavares and McLean were working on their second contract and negotiating terms for a third when the phone rang one Friday just before Christmas.

“The business was killed by Sugarloaf,” McLean said. “We had taken some significant loans to expand. The whole thing was planned out. … So on a Friday and we’re done, and everybody is talking about overtime and who’s going to work on the weekend and I got a phone call saying nope, stop, we’re done. … I said take the weekend off. Do not come in. The next phone call was to a lawyer.”

Despite the business misfortune, McLean said his love for his adopted hometown extends back to his earliest memories.

When the McLeans first moved to Damariscotta, they arrived ahead of their belongings. The first few nights in their new home were very much like camping, but McLean said the family was made to feel welcome right away.

“December of 1984, we moved into this house,” McLean said. “We got here long before our furniture did, so it was (a) couple sleeping bags. The four of us on the floor. Two things happened. Hale Tukey showed up at the door with a plate of muffins, and Father (Henry F.) Simms, who was pastor at the time, from (St Patrick’s Catholic Church), and he had under his arm a couple folding beach chairs. He said ‘I heard you’re here. You need someplace to sit.’ He brought us chairs. I said ‘I think we’re going to like it here.’”

“Why do I love this town? We only have one key, so I went across to Western Auto in the Elm Street Plaza to get some keys made,” McLean said. “That was Monday. We had only lived here two or three days. I reached into my wallet to pay for the keys and he says ‘oh no, no. Sometimes they don’t work. Go home try them. If they don’t work, bring them back, I’ll fix them. If they work, come back, and the next time you’re by this way, pay me.’ Who does business like that? Come to find out, everybody does business like that.”

“When we got into trouble at Robinhood, John Puckey, the oil dealer, I heard a noise out there,” McLean said. “What I heard was him rattling around on the oil tank there. I ran outside and I said ‘John I can’t pay you’ and he said ‘you can’t work in the cold,’ and he filled the tank.

“John Chapman, Chapman Insurance showed up. He said ‘your insurance on this place is due.’ I said ‘you know what, I can’t pay you.’ He said ‘oh no I have already sent it in. I just wanted you to know.’ Damariscotta. I hope it’s still that way.

For some reason, he does not recall specifically now, McLean began attending meetings of the select board. The board’s process of considering problems and deliberating to a conclusion appealed to him. After two years of steady attendance he was elected to the board in 1998 and went to serve 13 years, losing a reelection bid in 2011.

“That is not an easy job,” he said. “I don’t like it when somebody runs for select board because they have an itch that needs scratching. Because it is not a one-issue board; there are hundreds of things you need to think about, and understand, and know about. I know more about asphalt paving than I ever thought I would want to know.”

Since leaving the board in 2016, McLean has allowed himself to take a step back from his public commitments. These days, one of his current roles is one of his favorites.

He serves as the treasurer on the board of Lincoln County Dental, a Damariscotta-based nonprofit dedicated to providing oral health services to people in need.

McLean still remains active on behalf of his adopted hometown. He is a member of the Damariscotta Budget Committee and he is active on the town’s waterfront committee. If he says he pulled back, what he means is he’s more selective. For McLean, getting involved is not a halfway measure.

“The reason I’ve allowed myself to drift away, if I’m going to do something I am going to get involved,” McLean said. “I haven’t met Andrew (Dorr, Damariscotta town manager) yet. I know if I go over there, I am going to wind up doing something.”