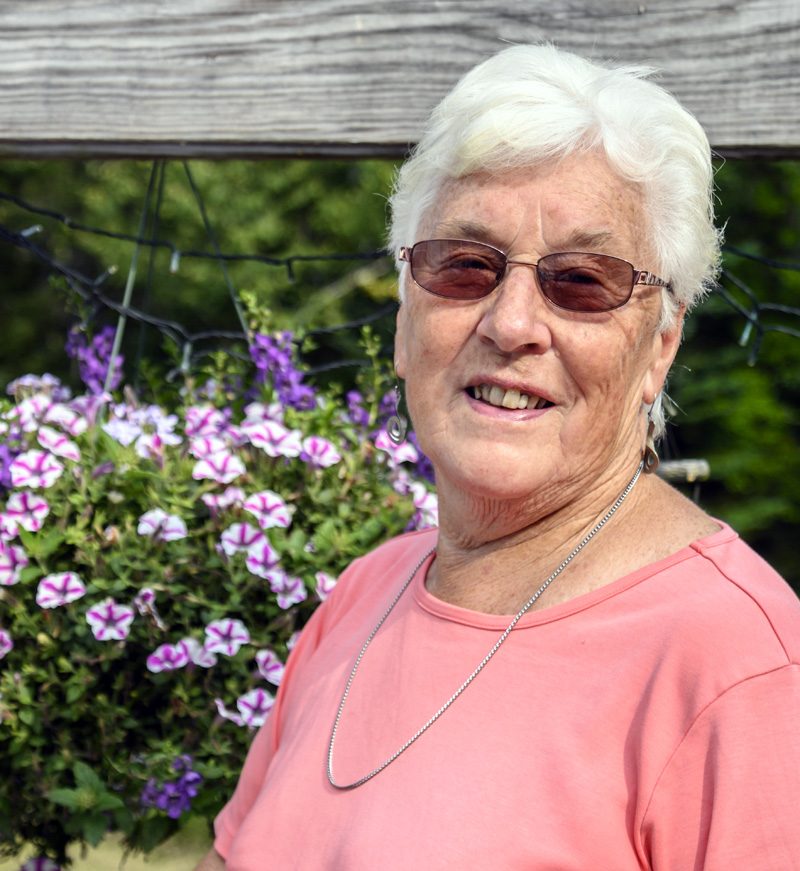 Donna Plummer stands with some of the flowers on her porch in South Bristol on Wednesday, Aug. 25. Plummer said her favorite flower is the star gazer lily, for it’s lovely name and its sweet scent. (Bisi Cameron Yee photo)

A twist of green glass hummingbirds spirals upward amid the array of bird feeders and flowers that adorn Donna Plummer’s porch in South Bristol. Birds dart in from the woods on the side of the house for a sip of nectar or a sunflower seed, and then disappear in a glittering whir of iridescent wings back into the woods.

Plummer has lived in South Bristol for most of her life, and she has always loved it.

Her father bought a house off the Thompson Inn Road when she was young.

“You go about 500 feet from the fishermen’s co-op, hang a left and go to the top of the hill,” she said.

There she grew up, looking out over the town, watching the sun rise over the water in the morning, and seeing shadows cast by sailing ships when the sun sank below the horizon at the end of the day.

“When you went across the bridge on the right there was Addie Gamage’s,” she said. “And she made frappes and sundaes and they had those little wooden tables with the wrought iron swirly things on the back of the chairs. They had hardware in the back,” Plummer recalled.

“Across the street on the left was my Uncle Bob’s lunch counter. Upstairs I learned to tap dance. And downstairs he had the lunch counter and a candy counter and at the end of that big building there used to be a bowling alley. That was gone by the time I was a teenager,” she said.

“The next place was House’s market – all the fresh meat, fish and vegetables you needed. We never went to Damariscotta (for groceries). We didn’t have to,” she added.

Plummer’s father, Frank Farrin, owned Farrin’s Lobster Pound, where the shop at Osier’s Wharf now stands. His father owned the business before him.

Plummer said she didn’t understand the role her family’s store played in South Bristol until she was older and she would meet people who had shopped there.

“They would immediately say, ‘Farrin’s store! We always went there. We always got our lobsters there.’ I think people appreciated that business very much,” she said.

Plummer worked at the store when she was 12 or 13. “I so much wanted to work there,” she said. “I would stock the cigarettes and stock the groceries, all those cans, and stock the penny candy – we had a penny candy counter. And dust the shelves. I pumped some gas and I dragged some bait. Oh, and I weighed lobsters. You take them out of the tank and there were scales hanging right above. So you pick them up and put them on the scale because they’d want a pound and a half lobster. I got so I was pretty good at picking them out.”

Plummer remembered marking newspapers for the summer people. She said these days when she meets a new summer person she “would know their relations because I marked their Sunday papers. I know all those names: Mazerian, Manchester, Elmer … I marked them with a big old black marker and the summer folks would come in to get their paper.”

The relationship between the summer people and the locals was not an antagonistic one back then, nor is it now. But there was a divide. Christmas Cove was an enclave within the town and Plummer said she never went there as a kid.

When she became involved with a man from Christmas Cove after her divorce, “it was fascinating to go up there and be on that island,” she said, to see the town from that perspective.

Plummer has friends among year-round residents, summer people, and new people who moved in more recently. She recognizes that while the line has become blurred over time, it’s still there.

“I’ve had people say to me ‘I just want to be accepted, how do I do that?’” she said. Plummer’s advice?

“You keep very quiet for a year. Just listen. Listen for a year. It’s a great little community if you accept it as it is.”

Plummer met her ex-husband working at Farrin’s Store. “Howard’s uncle had a lobster pound in Christmas Cove and Howard drove a truck for him and would pick up lobsters at my dad’s place of business,” she said.

At 16, she chose to marry him. The couple bought a bigger old house “just below the school on the left” and slowly fixed it up. They had six children.

“We were a wonderful couple. We were involved in the community, went to church, and took the kids to Sunday school. Howard was a Little League coach and Boy Scout leader. We were good community members. We had a good marriage for 39 years.”

Plummer said her husband worked for her father at Farrin’s Store while she picked up seasonal jobs that she could work around raising her children.

“I opened cottages in the spring. I worked in a little restaurant one summer. In the fall, I picked apples up at the orchard in Walpole and then in the winter I shelled shrimp for my dad to sell at Farrin’s store,” she said.

For a while the store provided support for the young family, but once the fishermen’s co-op was established in South Bristol, it spelled the end for the iconic business. The fishermen that once sold to Farrin migrated to the co-op. 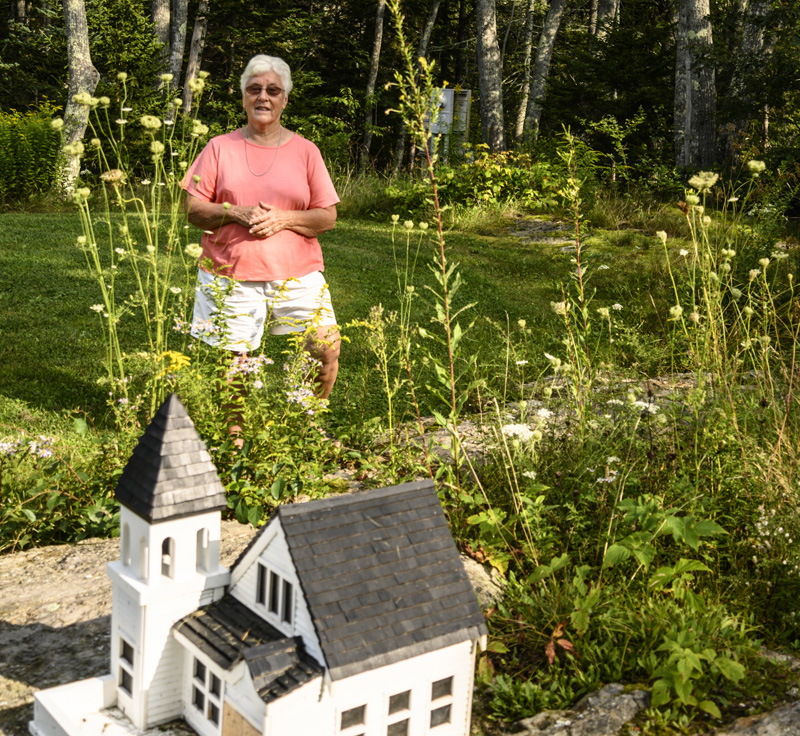 Donna Plummer stands behind a model of the Union Congregational Church on a rock ledge in her front yard in South Bristol. Plummer has been going to the full-sized version of the church since she was three years old. (Bisi Cameron Yee photo)

“The co-op was good for them,” Plummer said. “Like everything, somebody wins and somebody loses.”

Plummer attended South Bristol High School, but left when she got married. Later she studied for and received her diploma as an adult student, and ultimately landed a job as a math and reading tutor at South Bristol Elementary School.

Plummer said the Title One program, a federal program focused on funding equitable education, was the catalyst for the position.

At first she didn’t believe she had the qualifications for the job with just a high school diploma. But Plummer said the program provided the opportunity for “a person who cares about children to sit beside them and listen to what their problem is with math or reading and help them figure it out.”

Plummer worked at the school for 15 years until she was asked to help with a special education student at the Bristol School. She took up the challenge and spent the next 12 years working one on one with students as a special education ed tech there.

Plummer has been retired for over 20 years. She remains very active in the community, especially with the Union Congregational Church of South Bristol which she said she’s been attending since she was three.

She recalled that she didn’t go to church in the summer “because the summer girls wore hats and gloves. I didn’t own a hat or gloves.”

Plummer was part of the church youth group, an angel in the Christmas pageant, taught Sunday school, acted as a deacon, and a member of the board.

“I go up there and sit,” she said. “I have through all of COVID. It’s a nifty little church.” A miniature version of it, crafted for her by a friend, stands on a ledge of rock in the front yard of her home.

Plummer likes to sit in her living room or on her porch and watch the birds. She knows most of them by sight and has her mother’s copy of Roger Tory Peterson to refer to if needed. The book still has her mother’s notes in the margins.

“She recorded when she saw them – I don’t do that,” Plummer said.

A black-capped chickadee lands on one of the feeders, tiny claws expertly gripping the post as it glances around. Satisfied that all is safe, Maine’s state bird settles its feathers and plucks a seed from this South Bristol feeder.