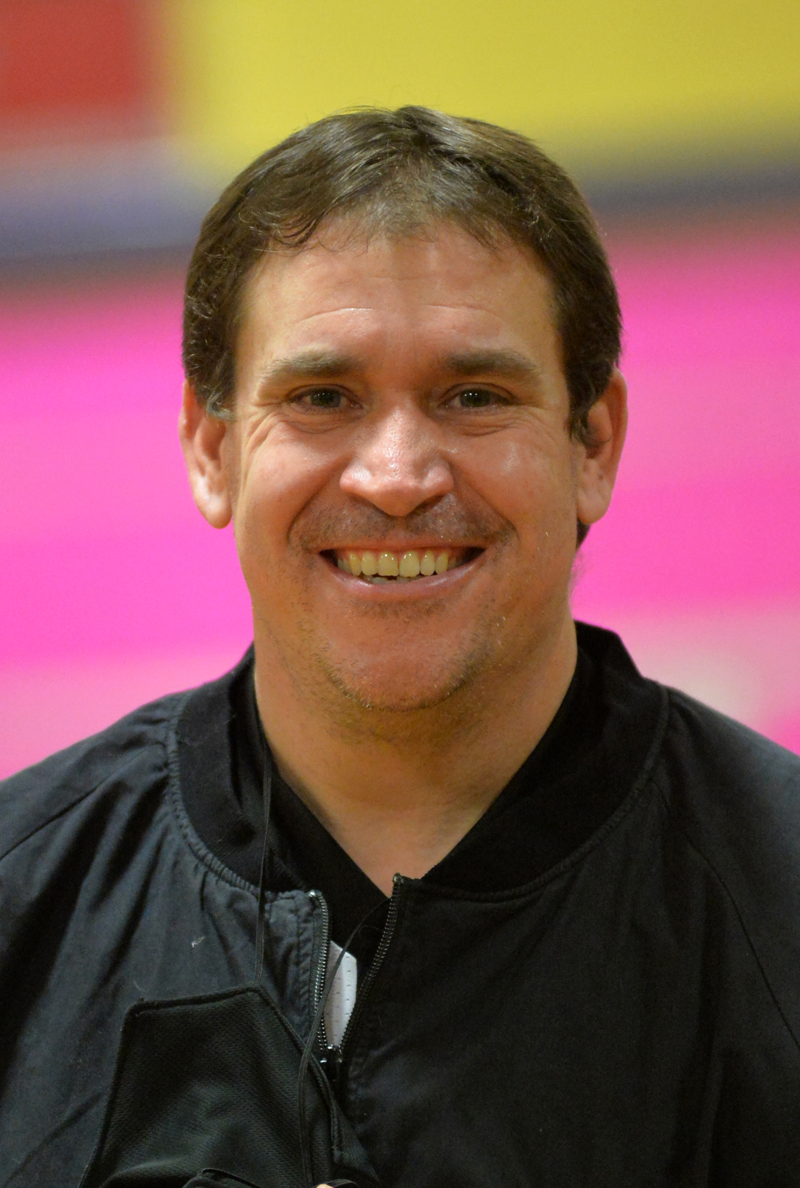 Ed Crocker, of Edgecomb, has an infectious smile, a kind heart, and a calming nature that has turned many a situation around, including working with and mentoring children.

He grew up in Boothbay and played football, baseball, and basketball at Boothbay Region High School. He played in the Maine Lobster Bowl, the equivalent of a state all-star team, and he was named a first team all-star in baseball.

He met his wife Candie, of 24 years, when they were 16-year-old students at Boothbay. After graduating in 1994, Crocker earned a law enforcement degree from Southern Maine Community College, and a criminology degree from University Southern Maine.

After graduation, Crocker said, he was “hoping to get into a probation-type job.” Instead, Crocker landed a job with Sweetser in Portland, where he did case management social work for 20 years. He worked with families, “mostly working with kids,” he said.

While living in Portland, Crocker began his 27-year career in officiating basketball. He has umpired baseball for 8-9 years.

He said his smile and calm nature has dispelled a lot of tense situations on the basketball court.

He lived in Brunswick for awhile, before returning to his roots, and settling in Edgecomb.

By then his family had grown to five children. He and Candie adopted two boys Calvin (28) and Austin (27), age 10 and 11 at the time. They added three biological children to their tight-knit family, Cameron (22), Hunter (20) and Emilie (18). Cameron attends University of New England doctorate program in physical therapy, Hunter attends Thomas College, and Emilie is a senior at Boothbay.

With five kids, the Crockers had a full house, but they found room to host two German exchange students. They also took in Jacob Wilson for two years, after Wilson’s father took a job out of state, but Jacob wanted to finish his high school career in Boothbay.

“I love basketball officiating. I want to coach, but I am not ready to give up officiating. As long as I can run up and down the court, I will not give it up.”

Crocker packed on a few pounds over the years, and found it harder to keep up with the high school varsity boys racing up and down the basketball court. So last spring, he decided to make some life changes. Some people joke he is half the man he used to be. Since April 15, he has lost 70 pounds.

He cut out carbs, eats more protein, and more salads, fruits and vegetables, and he started exercising. He walks or jogs every day, and when he is unable to get outside, he works out on a treadmill.

Crocker worked six years at the Boothbay Region YMCA as the youth sports director, camp director, and youth and teen director. He coached his children’s travel teams. He still works there part time with youth programs, including basketball.

While mentoring children at the Y, Crocker found his friendly smile and great personality calmed kids down.

“When I was running all the tournaments and working with kids, my calm approach and always having a smile on face made it so kids trusted me. Humor, patience and smiling, I think it helps,” he said.

He coached football with Lincoln County Football Club for five years, and has coached from the grade 3-4 level all the way up through high school. He took over the high school varsity program at Boothbay Region and the led the Seahawks to undefeated season his first year. Boothbay won the Class E football championship, and Crocker was named the Campbell Conference Coach of the Year.

Crocker said coaching is his “most rewarding experience.”

He is also the baseball coach at Boothbay, although they have not had enough players to field a team in two years. He expects to have 17-18 kids this spring with a strong group of freshmen coming in.

After leaving the Y full time, Crocker worked a few months as a reserve police officer in Boothbay. He then got back into social work in the behavioral program in the Boothbay school system a few years.

For the past three years, he has worked for the Boothbay Harbor Sewer District. “It was a great job, but I wanted to get my sister’s day care open again.”

Crocker’s sister Kim was killed in a tragic ATV crash last year. She owned Light House Learning Center, located on Crocker family property on Pension Ridge in Boothbay. Crocker and niece Morgan Crocker (Kim’s daughter) are in the process of getting the day care up and running again.

The Crockers are renaming the daycare Kimmy’s Kids. “She had such a great program; it would be a shame not to have it back up and running,” Ed Crocker said. Kim ran the daycare for 22 years.

In the transition, he is working as a long-term substitute teacher in Edgecomb.

“Hopefully, in the next month and a half, I should be able to open the day care. I never thought at 46, I would be doing this.”

After a 25-plus year career of mentoring children in one capacity or another, and with his calm personality and friendly smile, running a day care seems like the perfect fit for Ed Crocker.