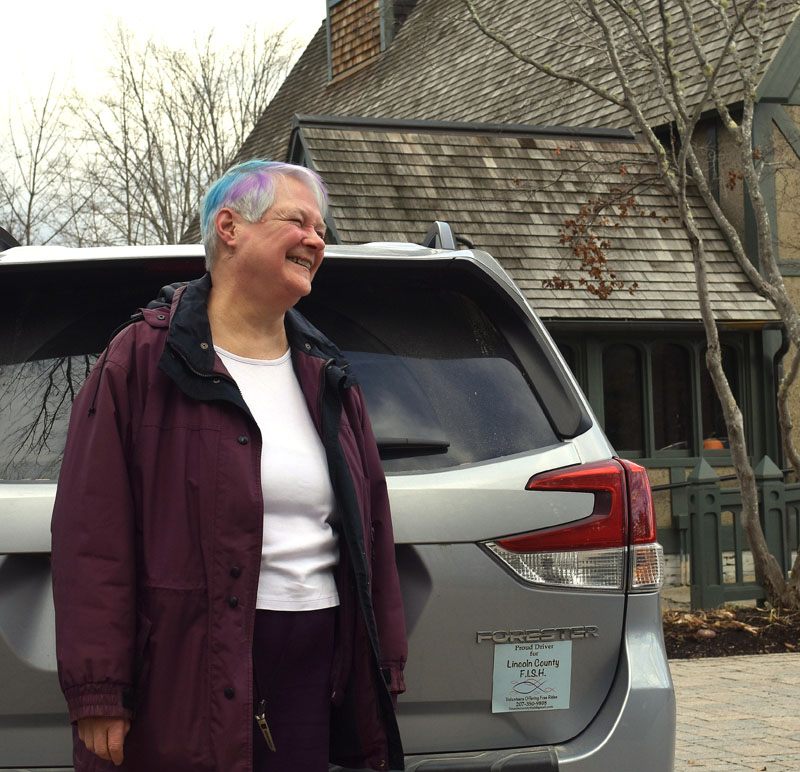 Edie Vaughn stands outside St. Andrew’s Episcopal Church in Newcastle with her car magnet that points out she is a “Proud Driver for Lincoln County FISH,” or Friends in Service Helping, a mission of the church. She led the founding of the volunteer service offering rides to Lincoln County residents in 2015 and considers it one of the two proudest accomplishments in her life. (Elizabeth Walztoni photo)

Edie Vaughan’s two proudest accomplishments are becoming a physical therapist’s assistant in her 50s and leading the 2015 foundation of Lincoln County Friends in Service Helping (LC FISH), a volunteer transportation organization supported by St. Andrew’s Episcopal Church in Newcastle. Along the way, Vaughan has loved several jobs, pondered the mysteries of life and death, and dyed her hair purple and blue to reflect how she feels on the inside.

Vaughan grew up in Groton, Mass., where her father taught at a prep school. She said her parents gave her and her three siblings solid structure and a good education but did not have specific ambitions for them, which gave her freedom in finding a path for her life.

“I’m not a planner or a dreamer,” Vaughan said. “I’m very aware that things have fallen into my lap. It’s miraculous, really.”

She attended Oberlin College and graduated with a biology degree. Vaughan has always been interested in medicine, biology, and how things work, but not because she needs to have all the answers. When she substitute taught a biology class, she said, she loved it when the textbook admitted there were things not yet known or understood about the world.

Vaughan worked for an insurance company after college, where she met her husband Bob Vaughan. In the following years she worked mothers’ hours in the offices of the prep schools where he taught physics while raising their son and daughter.

After her children were grown, Vaughan took a job as a hospice volunteer coordinator. She also earned a Master of Arts in Counseling from Lesley College, now Lesley University.

When Vaughan learned that she had melanoma, she left that job for treatment. She returned to the workforce as a massage therapist until the cancer came back.

“I survived against all odds,” she said. “Who knows how.”

“I’ve always reveled in mystery, the unknown,” Vaughan said. “Being sick didn’t cause that overtly, but probably when you come right smack against how much people care about you, you think, what else matters?”

Her experiences with cancer showed her how much people loved her, she said, a life-changing realization.

Facing that fear led Vaughan to become a physical therapist’s assistant. Completing two years of training in preparation was the hardest thing she has ever done, she said. Along with learning challenging material, she commuted into Boston daily while studying among peers 30 years younger.

Her work paid off in “the perfect job,” once her training was completed.

In her physical therapy practice, as she did when she worked in hospice, Vaughan learned to support people who had experienced life-changing events.

“I didn’t have to solve their problems,” Vaughan said. “People needed to tell their stories.”

There, she learned to appreciate life-changing events often happen later in life, when people have developed coping skills and networks to support them.

She also saw that it helps at any age to have a sense of humor. Vaughan said she sees humor as a physical release, part of letting go and relaxing.

“If you can see that it’s not all black, you don’t get mired in it,” she said.

When her husband retired in 2009, the couple moved permanently to a home they owned in Bristol Mills. Vaughan herself retired in 2013.

Then LC FISH came to her.

“I’ve done a lot of things in my life, but nothing where I saw a need, took control, and did something about it” before LC FISH, Vaughan said. “It was definitely life changing.”

The idea began at a volunteer event when she thought about people who would like to attend but could not drive. While Vaughan initiated the process, she thought she could get things started but would not run it herself.

Listening to a sermon one Sunday, she had an “a-ha” moment that said, “Yes you are!”

That was “a switch from an ‘I can’t’ to an ‘I can;’ the opening up of a possibility,” Vaughan said.

Today, LC FISH provides rides to Lincoln County residents who need transportation. Riders call a designated phone to request a ride and volunteers sign up to take them at no cost. St. Andrew’s provides administrative support and secondary insurance for drivers.

Vaughan said the program’s formation felt organic, which she believes is part of its success and the reason LC FISH has never had to fundraise.

She likes driving for the chance to meet new people and hear their stories; she feels there’s an intimacy about the experience. It takes a certain type of person to be a ride driver, Vaughan said, one who likes talking to strangers, and she is that type.

“Oh, I even chat people up in the grocery store,” she said.

These days, Vaughan is on the steering committee for LC FISH and takes her turn answering the phone. She has scaled back some of her work, but “it’s still my baby,” she said, and she will be involved for as long as she can.

Outside of her volunteer commitments, Vaughan loves to play pickleball at the CLC YMCA, knit, cook, spend time with her family, watch Red Sox games, and read mysteries.

She is also an active member of the Boothbay Death Cafe, a group that gathers to talk about all things end-of-life, such as planning for death, dealing with death, having a home burial, “death with dignity” legislation, and more.

“If it weren’t for death, life wouldn’t mean much,” she said.

When people hear about the Death Cafe, they often ask her why she would want to be involved. Vaughan is still not sure of the answer, but feels death is where “the rubber hits the road,” and that’s the type of material she wants to talk about.

There is also a mystery in death.

“I celebrate that we don’t know the answer,” she said. “The limitations of being human are pretty amazing.”

Whether thinking about life or death, Vaughan said that if she has learned anything, “it’s the importance of being in the moment with what’s really there, not what you want to be there or think should be there.”

To request a ride from or volunteer with LC FISH, call 350-9808. Vaughan said the organization is always looking for more drivers.