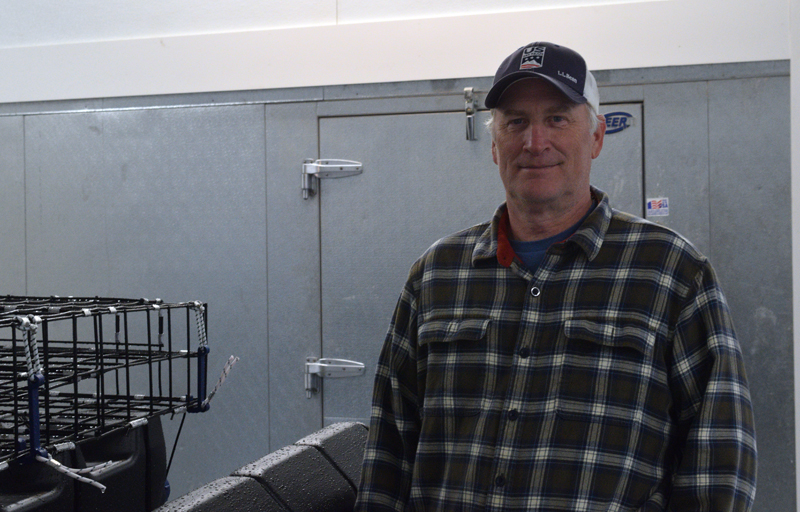 Eric Peters, co-owner of Norumbega Oyster Company, Inc., stands by an example of cage culture at the oyster farm’s facility on River Road in Edgecomb on April 19. (Evan Houk photo)

Ever since he was young, Eric Peters has enjoyed being out on the open water.

“I always loved water, loved boats, going to the ocean whenever I could,” Peters said during an interview on April 19.

Peters, a resident of Nobleboro, co-owner of Norumbega Oyster Company, Inc., and now Damariscotta-Newcastle’s harbormaster, grew up in Middlebury, Vt.

Visiting the beach and fishing at Martha’s Vineyard, Nantucket, and Lake Champlain developed his lifelong love for the sea at a young age.

He then attended Bates College in Lewiston for marine biology and started work for a scallop farm in Buzzard’s Bay, Mass., for about six years in the 1980s.

After spending a year skiing in the west, Peters soon felt the call to return to the water and found work on a clam farm in Florida, continuing to develop his skills in aquaculture.

However, Florida was too hot and “not his thing,” leading Peters back to Maine, where he found work in the Camden area as a carpenter.

The combination of carpentry work and the proximity to the ocean drew Peters to work at a boat shop in New Harbor, working on wooden boats for a few years, before finding steady work in the aquaculture industry.

In 1999, Peters started working for Bremen’s Muscongus Bay Aquaculture, where he soon realized that aquaculture is the perfect career for someone like him who wanted to work on the water all day.

“As soon as I had the opportunity to do the aquaculture thing, I jumped into it,” Peters said.

In 2006, Peters started Norumbega Oyster Company with his wife Kellie. The couple lives in a house in Nobleboro that Peters built.

“Our oysters grow in the perfect mix of fresh and sea water, with no industry upriver to create pollution. The ocean tide churns through twice daily,” the website, oystersofthedamariscotta.com, reads.

“I don’t eat oysters. But everyone says they’re the best they ever had,” Peters said of Damariscotta River oysters.

In addition to working on the water, Peters loves aquaculture because of the constant innovation and drive to find new ways of doing things.

A significant change over the past 5 to 10 years is the development of cage culture. The cages have plastic floats on the bottom to allow oysters to grow at the water’s surface.

Prior to this, Norumbega grew all its oysters on the bottom of the river and then either had to dive harvest them or drag them up.

“There’s a lot of work involved in it,” Peters said of the cage culture. “There’s pros and cons to both, and we’re doing both here.”

Since opening, Norumbega has continued to grow as the popularity of Damariscotta River oysters has grown.

In March, Peters was appointed as harbormaster for Damariscotta and Newcastle. He started working with the former harbormaster, Paul Bryant, around 2009. Peters started a mooring repair business at that time and has worked with Bryant on mooring placement in the Damariscotta River ever since, making him an ideal candidate to be harbormaster for the Twin Villages.

“Not that I wanted more work, but I figured it would be an easy fit,” Peters said.

Peters also served on the harbor ordinance committee since it was started in 2006, helping to draft rules to manage traffic on the river. Before the ordinance was adopted, Bryant had managed the river himself since the 1970s.

The need for a harbor ordinance came out of the increase in aquaculture farms and recreational boaters on the Damariscotta River.

“I don’t think there was as much going on back then as there is now,” Peters said. “The river’s gotten crowded since I first got on the river in 1999.”

Peters keeps himself busy working on the water, but enjoys skiing in his free time.