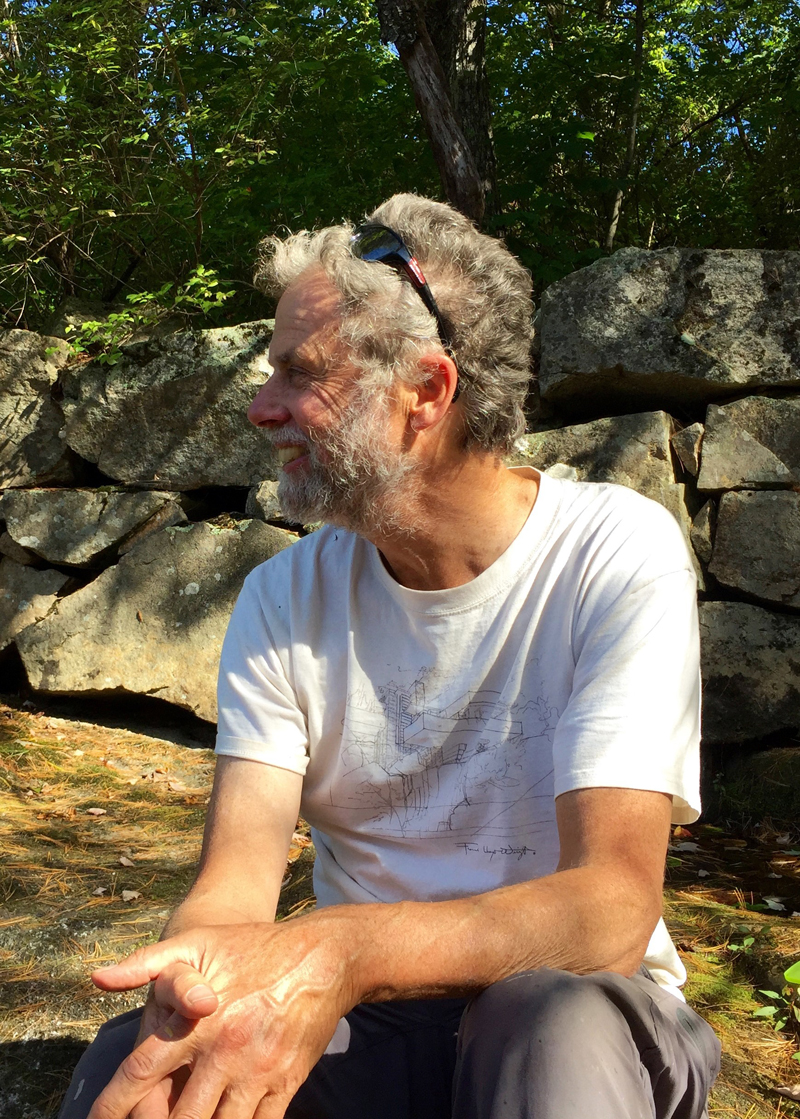 Newcastle’s Zip Kellogg is widely recognized for his eccentric appearances in Bangor’s Kenduskeag Canoe Race, but within Maine’s paddling community he is regarded for his nearly encyclopedic knowledge of Maine’s waterways. (Photo courtesy Zip Kellogg)

Name a river in Maine, and odds are that Newcastle’s Zip Kellogg can tell you how to navigate it. A retired librarian with a tireless passion for exploration, Kellogg knows his state in a way that few people do.

The legend of Zip Kellogg is rooted in the annual Kenduskeag (pronounced ken-duhs-keg) Stream Canoe Race. Held in the third week of April, the 16.5 mile race begins in the town of Kenduskeag and ends just before the Penobscot River.

Kellogg, who has participated nearly every year since the race’s inception, is known for not only descending the race’s most notorious stretch, Six-Mile Falls, while standing in his canoe, but doing so clad in white dress clothes and a dapper red bow-tie.

He said he stands in the canoe simply because it helps him to see farther down the rapid and plan his line; the clothes, on the other hand, are just for fun.

The Kenduskeag is something of an annual homecoming for Kellogg, as he grew up in Bangor along the banks of the stream, abutting a section of it known to local paddlers as “the Shopping Cart.”

Kellogg’s parents were themselves avid paddlers, and when the inaugural Kenduskeag race came around in 1967, he quickly registered and ran it in his parent’s wooden canoe. Suffice to say, he wasn’t quite as skilled a paddler as he is now.

Now, Kellogg doesn’t bother to hurry down the stream, since he isn’t particularly interested in racing canoes. Most winners of the race finish in about two hours, while Kellogg typically completes it in about four. In fact, while he has fun with the race every year, he said that it isn’t really an accurate portrait of the kind of paddler or person he is.

“That’s a very small part of the picture,” Kellogg said.

“Small” is a bit of an understatement, as the Kenduskeag race represents only 16.5 miles of the 31,806 miles of waterways in Maine. While Kellogg hasn’t paddled along all of them, he admits that, after 50 years, it takes some effort on his part to find those he hasn’t.

“Chances are if you’ve been over a bridge in Maine, I’ve been under it,” he said.

For decades, Kellogg was recognized as one of the preeminent authorities on paddling Maine’s rivers, streams, lakes, and ponds.

In the 1980s, the DeLorme Mapping Company approached him to ask if he would write a series of canoe guides for the state’s regions. Kellogg was “running rivers like crazy” by that point, and used his personal notes to write three guides: “Northern Rivers,” “Western Rivers,” and “Eastern and Coastal Rivers”.

Kellogg even parlayed some of the descriptions from these guides into a section he wrote for the ubiquitous Maine Atlas and Gazetteer.

However, Kellogg’s guides do more than just provide a guide for navigating the river; they weave in cultural and natural history with descriptions of the river’s technical features. For every river, he looks for a story.

“What I wanted to do in those is tell a story about the river,” Kellogg said. “When we go down rivers, a lot of Maine history is laid bare in front of us.”

Kellogg’s passion for maps, stories, and exploration eventually led him to his career. After graduating from Bangor High School, Kellogg spent about eight years hopping from job to job, including one year spent building canoes for the Old Town canoe company, until one day he realized the confluence of his interests lay in library science. 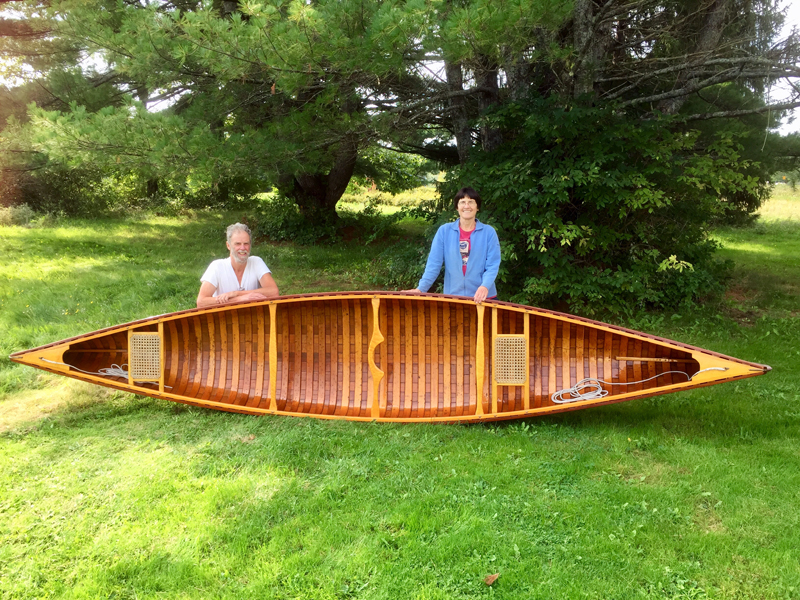 Zip Kellogg and BB Adams with a wooden canoe that they frequently paddle together. Kellogg, a retired librarian, and Adams, a teacher, are both serious paddlers, but met 11 years ago while out dancing. (Photo courtesy Zip Kellogg)

Kellogg’s career took him from the University of Maine to the Library of Congress. However, the vast majority of his time, over 30 years, was spent at the University of Southern Maine’s Glickman Library in Portland.

Kellogg retired about five years ago and moved to Newcastle to live with his partner, BB Adams. Adams, a teacher from the Topsham area is as talented a paddler as Kellogg, but, ironically, they actually met dancing.

However, it wasn’t long before the two were paddling partners.

“We would meet at the rivers,” Kellogg said. “That’s what we still do.”

Kellogg said that Adams shares his love of maps, and that they have an 11-foot one, taped together from the pages of a Maine Atlas, on which they mark out with a red felt pen the waterways they’ve travelled.

The map serves as less of a hit list, and more of a way to stoke their imaginations.

“We use maps because they help us wonder a little bit,” he said.

However, Kellogg isn’t permitted to mark out the routes he’s done himself, as there wouldn’t be very much blue left.

When he isn’t canoeing, Kellogg serves as the president of the Baxter Society, a Portland-based nonprofit for people interested in either collecting or making books that promotes improved quality of public libraries and bookmaking.

He also volunteers with the WindowDressers a volunteer-driven non-profit organization based out of Searsmont dedicated to helping Maine residents reduce heating costs and fossil fuel consumption by providing communities with insulating window inserts.

Kellogg’s advice for those who are interested in canoeing is to find people who love it and learn from them. He is a long-time member of the storied Penobscot Paddle and Chowder Society. Established in 1969 by Maine canoeing pioneers, the organization provided a young Kellogg with a community that introduced him to new adventures.

In a break with tradition, Kellogg didn’t run the 2021 Kenduskeag; the race was limited to 300 spots, and he thought that he ought to let his spot be taken by someone who had the race on their bucket list.

He believes that he and Adams will join the race next April.