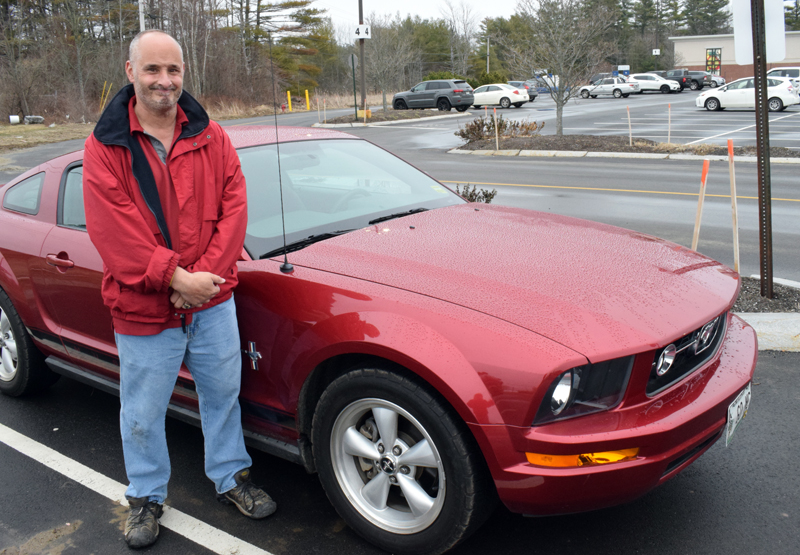 It seems like everyone knows and likes Kyle LeBeau. During a March 25 interview in the parking lot of the Damariscotta Hannaford where he works, it seemed like every few minutes he was smiling and waving at another person.

“I’m a people person. I love people and people love me,” LeBeau said.

LeBeau is your friendly neighborhood grocer, helping to bag groceries and corral carts at Hannaford, among other duties.

LeBeau started working at the location when it was still a Shop ‘n Save. Originally, he was in the maintenance department, but the manager soon realized LeBeau was a people person and moved him into a role at the front of the store.

“All the people I work with are very nice to me. We get along so well, like one big happy family,” LeBeau said of his time at Hannaford. He said he likes all the customers and recognizing the faces of seasonal residents each year when they return.

LeBeau grew up near New Bedford, Mass. and has lived in Newcastle for 37 years, since his father had to relocate for his job in the food service industry.

“Ever since I moved up here, I’ve loved it,” LeBeau said.

He began attending Great Salt Bay Community School for sixth grade after moving to the area.

LeBeau had a skiing accident when he was 13. He flew down a hill of hard-packed snow and ice, not able to stop and not wanting to run into and hurt anyone else. When he fell and hit his head on the hard surface, the impact nearly blinded him.

“The doctors thought I would be blind, but I fooled them,” LeBeau said. “I’m fine now. That’s in the past.”

LeBeau graduated from Lincoln Academy in 1990, where he played soccer. He enjoyed all his classes at LA and got along well with the teachers, especially Phil Page, who still works at the school in various rules, including as assistant athletic director.

LeBeau attended vocational school in Bath and Rockland while at LA, first studying to be a car mechanic.

“That didn’t work out too well. I like driving, but that’s it,” LeBeau said.

LeBeau’s prized possession is what he calls his “summer toy,” the burgundy Ford Mustang that he has dubbed “Mustang Sally.”

LeBeau then tried some cooking classes at vocational school, but that didn’t jive very well either.

After high school, LeBeau found work at Walmart in Brunswick doing many of the same jobs he does now at Hannaford. His persistence paid off — he said he would stop at the Walmart every week after catching a movie at nearby Regal Cinemas and ask for a job.

“They probably were sick and tired of looking at me and said, ‘Here, hire the guy!’” LeBeau said with a laugh.

Movies are one of LeBeau’s favorite pastimes and he is anxious to get back into theaters. He mostly enjoys horror films, like the “Halloween” franchise, and action movies, like the “Die Hard” and “Lethal Weapon” series.

“I have Netflix and Amazon on TV, but I like going to movies and seeing the big screen,” LeBeau said.

After working at Walmart, LeBeau found a job closer to home, detailing, washing, and waxing vehicles at Newcastle Chrysler Dodge Jeep for six years. His experience in this field was evident on the exterior of his Mustang, where rain droplets beaded up nicely — a sign of a fresh wax.

After he left Newcastle Chrysler and started work at what was then Shop ‘N Save, he also worked for a time at King’s Corner Day Care, near the Damariscotta Baptist Church.

LeBeau said the pandemic year has been tough, but he is hoping for a better summer.

“It was scary, but now it’s easing off a little. Everyone knows what to do now,” LeBeau said.

He said he was perplexed, like many people, about the initial rush to stock up on supplies last March, particularly toilet paper.

“I don’t know why they stocked up on toilet paper so much. I think they made a bunker out of toilet paper,” LeBeau said, chuckling.

LeBeau also does a lot of volunteer work in Lincoln County.

He volunteers for the Damariscotta Pumpkinfest and drives his Mustang in the parade every year, helps with the annual Making Strides Against Breast Cancer walk in the Twin Villages, helps out and donates food to the Ecumenical Food Pantry in Newcastle, serves on the Lincoln Academy Alumni Council, and has worked with the Lions Club and the March of Dimes in the past.

“I’m trying to give back little by little when I can,” LeBeau said.

LeBeau enjoys spending time with his friends and family when he is not working or volunteering. He enjoys being an uncle to his young nephew and seeing him whenever possible.

He said he visited Disney World in Florida with his nephew one time and hopes to go back at least once, possibly after he retires.

LeBeau also makes it a point to go out to dinner with his friends at least every two weeks.

“After working here all week, I just like to get out, get some good food, relax, and chill out,” LeBeau said.

LeBeau said he likes everything about Lincoln County and can’t see himself ever leaving.