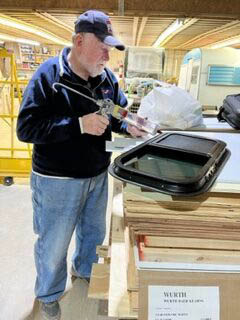 Ed Harmon credits his grandmother for instilling in him a sense of community. Mary Ann Everett was a kind, powerful woman who loved children and worked hard, supporting herself cleaning homes for the well-to-do in Jamaica Plains, Mass.

Never turning his back and never giving up are rules of life for the Boothbay man. Harmon has come back from his own significant challenges, including a near-fatal heart incident in 2018.

“I have been up and down in my lifetime, many times, that’s why I never turn my back on a person, you know?” he said. “I have always reached out to people.”

Harmon relates the story of his life in large part through the stories of others – the alcoholic who needed a job; the family in desperate need of an oil delivery. The personal details are always obscured but the message is the same: put people first, politics last.

“I believe everybody deserves another chance,” Harmon said. “I have given people three and four chances, because you never know which one is going to work.”

Using donated funds, materials, and volunteer labor, Boothbay V.E.T.S. purchases trailers to convert into temporary shelters complete with a bed, microwave oven, mini refrigerator, a commode, and a lockable door. Harmon said the idea developed while he was attending various meetings on his way to becoming the service officer for the Charles E. Sherman Jr. American Legion Post No. 36.

“I learned and I listened and every place I went they kept saying the same thing, ‘Nothing can be done for that time period,’” Harmon said. “What do you mean nothing can be done? I am a believer there is a solution for any given problem.”

Together with fellow Boothbay area veterans John Hargreaves and Arthur Richardson Harmon founded Boothbay V.E.T.S. and outfitted their first trailer for $8,500. To date they have completed 13 trailers, and are currently providing housing for eight individual veterans.

The idea has been taken off to the point Boothbay V.E.T.S. has attracted national attention. Donations come in from around the country and later this month, Harmon is being flown out to address the 123rd National Convention of Veterans of Foreign Wars in Kansas City, Mo.

“I’m finding that more people that are nonpolitical are the biggest help,” he said. “There are people that want to be, let’s not say bipartisan, but they don’t want to have politics involved in it.”

A Navy veteran, Harmon enlisted while he was still in high school in 1966. He ended up serving for six years, all of them related to Vietnam. Today he is an active member of several veteran organizations including Veterans of Foreign Wars, Disabled American Veterans, the Sons of the American Legion, and the American Legion.

As the Post No. 36 service officer, he provides help and counsel as needed, whether it’s picking up a 3 a.m. phone call from one veteran desperately needing to talk to another, or helping someone navigate the labyrinthine bureaucracy that is the Veterans Administration.

Currently Harmon is preparing for Boothbay V.E.T.S. next big fundraising event, the second annual V.E.T.S. Picnic, put on by the Sons of the American Legion. Saturday, Aug. 20. The picnic will be held at the Charles Sherman Jr. Post No. 36, 25 Industrial Park Road, Boothbay, from 4:30-6:30 p.m. Last year, the event raised more than $11,000.

“We showed the trailer yesterday (June 24) and we got donations and everything and the lady of the place says you tell me how many hamburgers and hot dogs you need for this barbecue we’re doing in August,” Harmon said. “Pinkham’s the same way – ‘tell me how much pork you need.’ I got another one, donating a pig to us. I’m going to cook it on a spit.”

Harmon said the support of private donors helps him maximize the returns for the cause. It is support he is happy to repay in kind, he said. Each organization helping another can only improve the total service to the community.

“Its’ going to cost me about 50 bucks to do this,” he said. “Last year it cost $86 to feed 430 people. I am going to have 650 (people) this year. I have got three motorcycle groups coming. Why? Because they believe that I am there for them. If you have a fundraiser, I’ll be there to help you. That money is yours. I’m there to support you because you support us, and that’s what the network is: people that are not in politics. Politics sometimes gets in the way.”