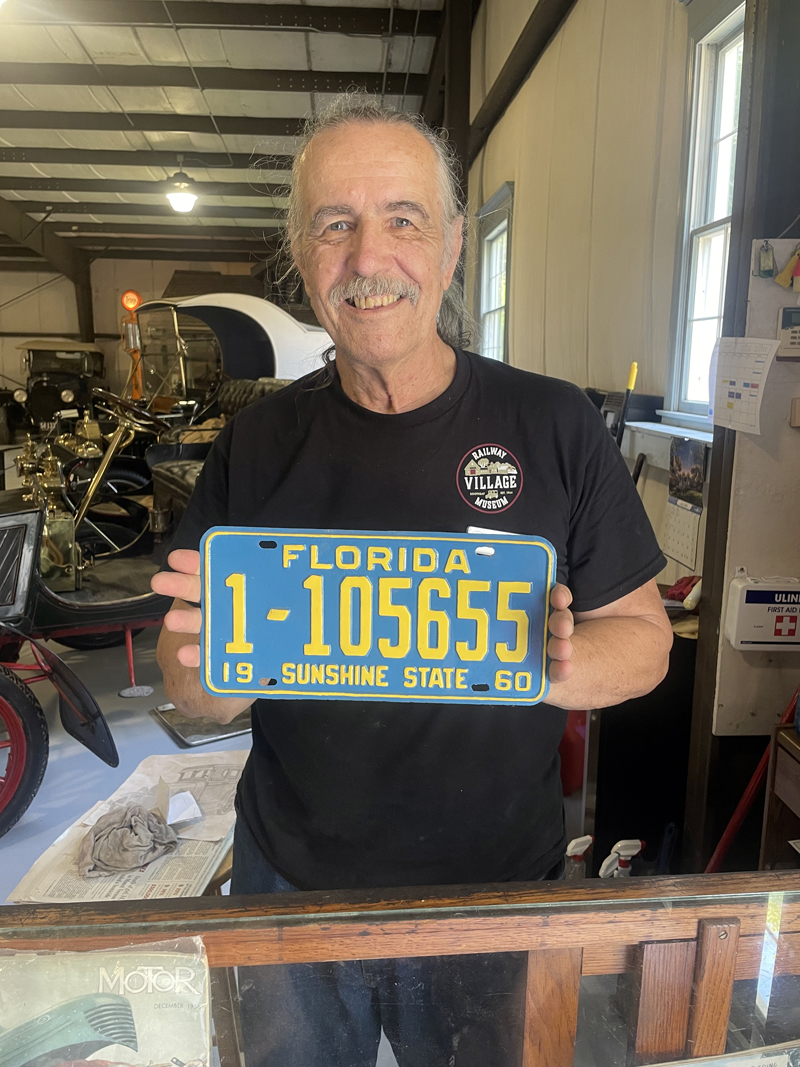 Larry Burridge shows off a vintage license plate he cleaned and refurbished, another hobby he has developed related to his passion for antique automobiles. (Sherwood Olin photo)

Larry Burridge loves automobiles. A skilled mechanic with encyclopedic knowledge and an artist’s eye, Burridge retired to Maine 10 years ago and landed what can only be described as an ideal job for a man of his inclinations.

Since 2015 he has been employed more or less full time as a docent in the antique auto museum at the Boothbay Railway Village in Boothbay.

There, the Connecticut native and current Waldoboro resident tends to the museum’s fleet of historic automobiles, gently guiding members of the public through the exhibit, answering questions, directing traffic, and dropping bits of automotive enlightenment into almost everything he says.

“I had been here as a tourist,” Burridge said. “I never dreamed I would be working here one day.”

Burridge likes old cars in general, but he has a particular fondness for models from the 1930s. During that period automotive design advanced rapidly. Cars at the beginning of the decade looked dramatically different from models being produced at the end. For one thing, by 1940 designers had largely enclosed the seating area, doing away with the early models that left passengers exposed to the elements in favor of enclosed seating areas.

“During the 1930s, the style of cars changed more, between 1930 and 1940, than in any other decade,” Burridge said. “They were just starting to get into streamlining. Chrysler actually designed a car that almost put them into bankruptcy because it was so far ahead of its time.”

Recently he spent time refurbishing a 1923 Buick sedan that was a new donation to the museum. A visitor to the area donated the car and related materials including the original owner’s manual and the check the donor’s father used to buy the car, secondhand.

Prior to its arrival in Boothbay, the car had been sitting in a Long Island garage since 1956. At that time, America was changing rapidly and the automotive industry was changing with it.

“In 1956, that was when the superhighways started coming in and a car like this isn’t going to keep up on a superhighway,” Burridge said. “This might go 40-45 (mph), but that would be pushing it. This was built for like maybe 25-30.”

Earlier, discussing a 1902 curved dash Oldsmobile, Burridge said automobiles were invented for a world that no longer exists now.

“Henry Ford envisioned the automobile replacing the horse but he never pictured people on superhighways going 60 miles per hour plus,” he said. “A car like that you usually used it, maybe 5 miles. You took it to church. You took it to town and back. If you wanted to go from here to Augusta or Portland, you took a train or a trolley.”

Burridge is quick to credit Ford with launching the revolution that would become the automotive industry, and he is equally quick to credit his father, Andrew, for fostering his lifelong love of automobiles.

Andrew Burridge was himself a skilled mechanic who loved to tinker on cars. During the day he worked for Hamilton Standard in Hartford, Conn., making aircraft engines. On the side, he and a friend would buy used cars, fix them up, and sell them for extra cash.

At one point the elder Burridge took a part-time job in a junkyard to support his automotive hobby. He took his son along with him one day and Larry found himself transfixed by a sight that changed his life: a 1929 Oldsmobile.

“I was drawn to it like a magnet,” Burridge said. “They actually sold it. It was on my 14th birthday. I remember I helped them push it out. We had to put air in one of the tires, but I helped them push it put. I cried, but at least I know that one was saved. I saw a lot of other antique cars there that were crushed.”

Years later Burridge drew a picture of that specific car. His drawing is currently in a display case in the antique auto museum.

In 1965, when Burridge was 17, his father was killed in a motorcycle accident. Burridge stayed friendly with the owners of the junkyard where his father worked. The owner’s son, Paul, eventually helped Burridge acquire his first old car, a 1935 DeSoto. Setting in with more enthusiasm than experience, he completely disassembled the DeSoto, only to learn he had no idea how to put it back together.

“I was all enthusiastic,” Burridge said. “I tore everything out and then a few months later it was ‘what the hell is this?’ So Paul ended up taking it back to the junkyard.”

A few years later, Burridge had better luck with a decrepit Chevrolet he discovered at a Torrington garage. At that time, in April 1970, he was working for the American Red Cross. It was his job to drive the Red Cross Bloodmobile to locations around Connecticut.

As it so happened, while working a blood drive in Torrington, Burridge was asked to find a garage to have a minor problem on the Bloodmobile fixed.

“So I found a garage and the guy says ‘yeah I can fix that,’” Burridge said. “There was a 1936 Chevrolet sitting out front with a “For Sale” sign on it so I was out, of course, looking at that. It was a two door sedan. It had the bustle truck in the back. Trunk hinges are broken. Trunk lid is in the rear seat. There’s no front bumper. Just two empty headlight buckets on the side of the grill. Guy comes out and says ‘you want to hear it run?’ ‘It runs?’ Sure!’”

The engine turned over without issue although “it was awfully loud because it had no muffler,” Burridge said. By the time negotiations closed, the sale price amounted to the entirety of Burridge’s just-received two-week paycheck. Burridge cashed his check at the nearest bank, handed over the money, and then realized he had no plan for getting the car home. He lived in Windsor, about 25-30 miles away.

The next day, Saturday, Burridge woke up in Windsor. He hitchhiked out to Torrington, bringing with him a pair of Massachusetts license plates he planned to attach long enough to get the car home.

Once Burridge started up his prize up and wheeled it around to the pump, “the guy comes out and he says ‘are you going to drive this home?’” Burridge said. “I said ‘yeah, I have no other way of getting it home.’ He’s looking at me like I am crazy so I said ‘do you want to make the sale or not?’ Right away he makes like Sergeant Schultz on ‘Hogan’s Heroes.’ I know nothing. You don’t know me. I don’t know you.”

Burridge safely white knuckled the drive all the way home to Windsor. Today he tells the story with dramatic gusto, recalling the police car that cruised by his obviously illegal ride, the giant hill he had to avoid, and the stalling issues.

“I got maybe about two miles from home, and there was a big insurance company,” Burridge said. “There was a four lane divided road at that point. There’s a stop light for the insurance company. I’m in the right lane. There was a guy in the left lane and he had one of these brand new at the time Ford Country Squires, with the artificial wood grain. There was a guy in an old Ford Fairlane behind him and he’s looking at this refugee from a junkyard I’m driving. He (Fairlane) never saw that guy (Country Squire) and plowed right into the back of him. There was nobody else around, so I just kept going. I got about a half mile from home and the thing stalled.”

Burridge finally coaxed the Chevrolet back to life, got it home, and left it in the garage for more than a month, until his pulse stopped racing.

After high school Burridge stayed in the Windsor area. He married his wife Maureen in 1981 and in 1989, he learned McPherson College, a private liberal arts school in McPherson, Kansas offered a degree program in antique auto restoration.

“It’s a four-year program now, but it was a two-year program when I went,” Burridge said. “I graduated in 1991. I still got a Model A that I got from the college. It was a 1930 Model A Coupe. I got it running and drove it to my graduation.”

More than 30 years later, Burridge still has the car, parked at his home in Waldoboro.

“I have just always loved antique cars,” he said. “It’s always been cars.”