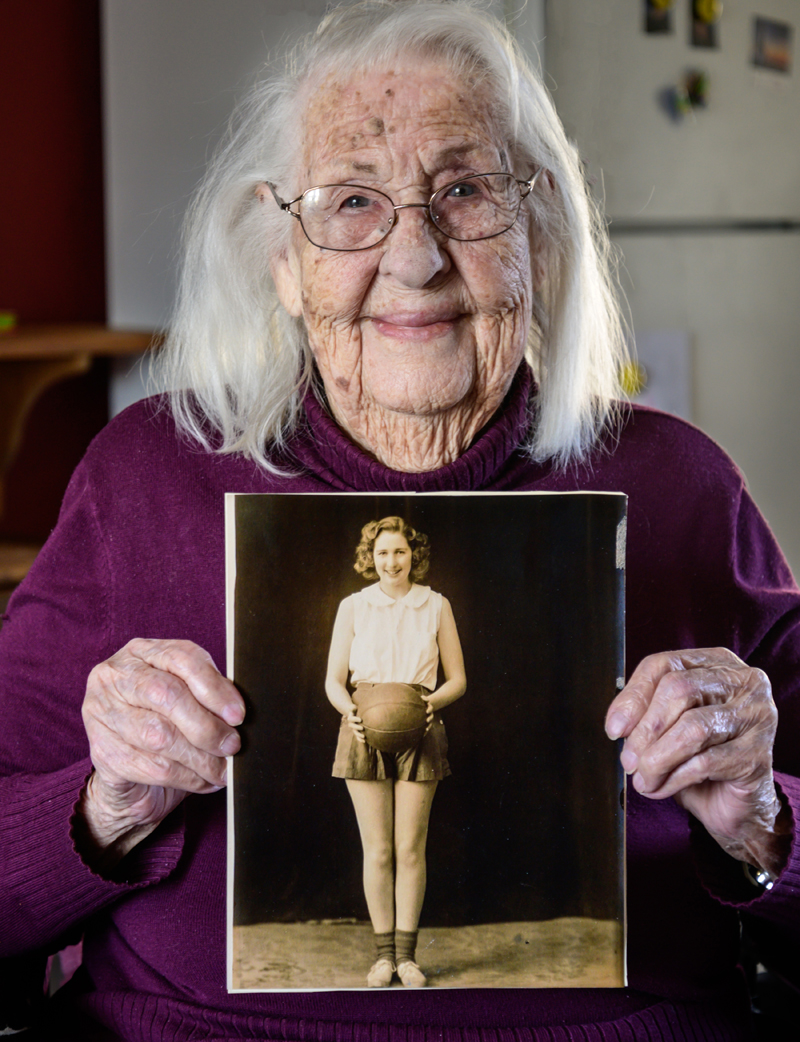 Fran Williamson, 103, poses for a picture with her younger self on Saturday, April 10. Williamson was the captain of the girl’s basketball team at Crosby High School in Belfast. (Bisi Cameron Yee photo)

More than 140 cards, a parade of fire engines, friends, family, and a flock of flamingos arrived at Fran Williamson’s home in Jefferson to celebrate her 103rd birthday.

At 6 p.m. on Friday, April 9, Williamson’s son, Donnie Johnston, drove her down to the end of the driveway where she could wave to the line of emergency vehicles and streamer-decorated cars that drove past the 1860s farmhouse where she still lives on her own.

Jefferson Village School eighth graders delivered the flamingos, a fundraiser for an end-of-the-year event for their class. Williamson’s family made a donation to have the flock delivered for her birthday.

A homemade float pulled by a tractor turned onto the property and spilled grandchildren and great-grandchildren dressed in period costumes from 1918, the year Williamson was born.

The front yard overflowed with family. Williamson had moved to the porch where her daughter-in-law tucked a blanket under her legs and a granddaughter draped a fleece pink jacket over her shoulders. Johnston presented his mother with a cake full of candles.

The next morning Williamson sat in her kitchen and reflected on a century of living.

Williamson is Jefferson’s oldest resident. She grew up in Morrill on her father’s dairy farm. She was the oldest of four, and was particularly close to her brother Blaine, who was only a year younger.

“We were always doing stunts of some sort,” she said. “We had a pond — that was fun — we could go swimming and fishing for brook trout.”

Williamson said she had a Ford that she drove to Crosby High School in Belfast. She was the ride for a group of local kids and said that driving to school was fun except when some of the kids would fight. “Sometimes I dumped them and left them there to walk home,” she said.

Sometimes she walked home herself. Williamson played on the school’s basketball team and when she had practice, her brother would drive the other kids home while she either got a ride with someone or walked the 10 miles back to Morrill.

Williamson was a good basketball player, making team captain. She played center because “I could jump,” she said. “We were winners most of the time — that’s what makes it fun, you know.” 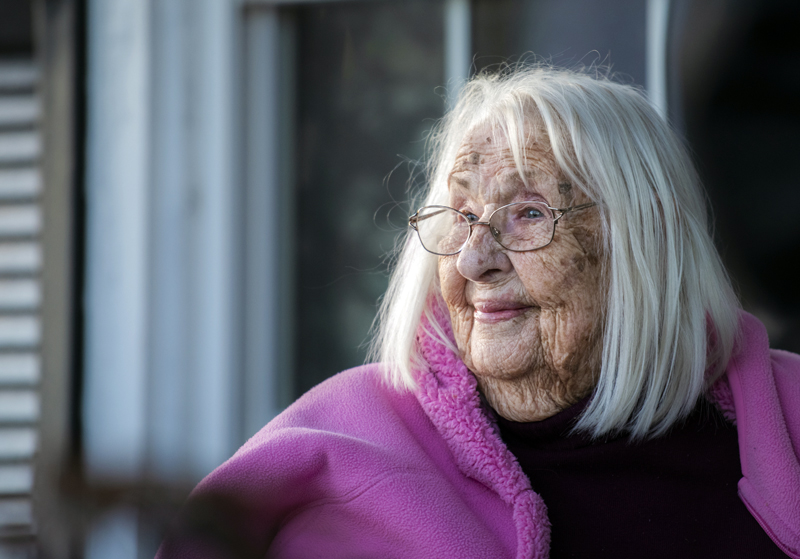 Fran Williamson observes her birthday celebration from her porch in Jefferson on Thursday, April 8. Johnston still lives on her own at 103. (Bisi Cameron Yee photo)

Williamson earned extra money in summer by raking hay or picking factory beans. “Stooping over — it was hard on the back, but I didn’t dread doing it. I guess I didn’t know any better,” she said. “That was a big thing — to earn some money and do what you want to do with it. I would buy mostly clothes I wanted, special things.”

After high school Williamson attended hairdressing school in Belfast.  She worked in that profession for most of her life, cutting hair in a room in her house in Jefferson. Her son recalls that at the age of 95, his mother would still gather up one of her long-time clients from the Jefferson Green across the street and bring her to the house to do her hair.

Williamson moved to the farmhouse on Waldoboro Road when she married a boy from Jefferson in 1941. Williamson and her first husband Don Johnston made a life together there, working the apple orchard on the farm, tending a flock of laying hens, and harvesting ice for the ice house on the property. They had an apple stand near the road where they sold the orchard’s bounty to neighbors.

Williamson said the towns always had dances on Saturday nights. “I think I met Don at one of them.” She said a small orchestra and a group of volunteer musicians would play so people could waltz. “I loved to dance,” she said.

Williamson said she and Don Johnston were married by a justice of the peace and they honeymooned in the mountains. The couple had one son, Donnie Johnston, who currently lives next door and, with the help of his wife and several caretakers, ensures that his mother is able to maintain her independence.

“I’ve had a busy life,” Williamson said. An avid gardener, Williamson kept beautiful flower gardens. She mowed the lawn herself until the age of 99 when it finally became too difficult for her to steer the riding mower out of the barn.

In winter she does “a little sewing, a little painting,” she said.

Williamson is an accomplished self-taught painter. Her still lifes of fruit and flowers hang on a wall near the kitchen and an ocean scene in her living room shows the curve of Maine’s rocky coast as a sailboat heads out into deep blue water. She entered several competitions “for the fun of it,” and even won a few, she said.

Williamson learned to cook from her mother and was a cook of some renown herself.

“At town meeting time she would always make a big batch of cream puffs with homemade filling and a little chocolate frosting on them and take them to the workers at the voting booth,” Donnie Johnston said. “That used to be a big hit. Everybody would be looking forward to election time and those cream puffs.”

Williamson also loves the outdoors. When she was younger, she enjoyed hiking, and even summited Mount Katahdin. “The state is pretty around the mountains,” she said. Williamson has worked physical jobs and enjoyed physical recreation all her life. She credits hard work and keeping active for her longevity.

She still likes to get out when the weather starts to get good. Her family makes a point of taking her on jaunts to enjoy the sun and the fresh Maine air.  “I like living on the lake. Jefferson’s a nice little town. It really is,” Williamson said.

Williamson took a sip of coffee from her “Yahtzee Champ” mug. She plays the game twice a week with granddaughter, Erica. She glanced down at the box holding all her birthday cards. “I got a job,” she said as she contemplated writing 140 thank you notes.