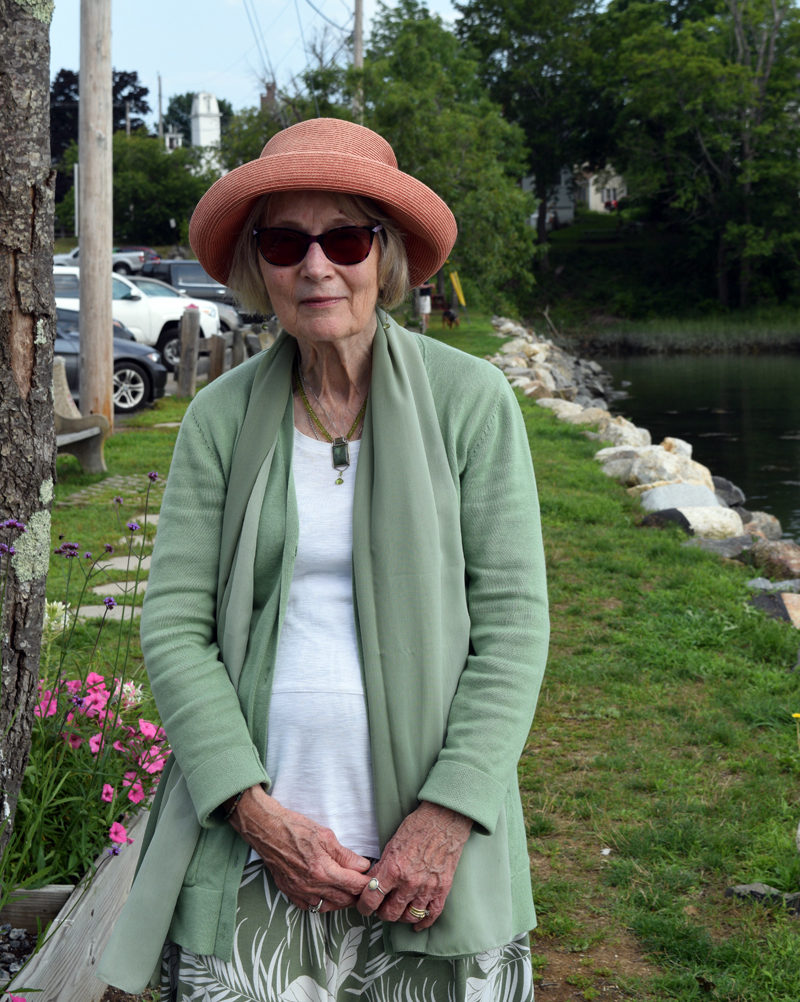 Ragnhild Baade, otherwise known as Frau Baade by those who took her German classes at Boothbay Region High School, has lived through the Second World War in Germany as a child and is a founding member of the Holocaust and Human Rights Center in Augusta. (Nate Poole photo)

Ragnhild Baade taught German at Boothbay Region High School for 33 years before she retired at the age of 70. Known to countless Boothbay graduates as “Frau Baade,” she dedicated her career to teaching German and English. But above all else, she is fluent in storytelling.

Not one to sit still, she hiked 200 miles on Spain’s Camino de Santiago with a German-speaking friend shortly after retiring. Nearly 81 years old now, Baade doesn’t travel as much, but she can still take a listener from Eastern Europe to New Jersey, through perilous escapes and youthful escapades.

Baade’s father was Latvian and her mother was Russian. Both were raised in Estonia until they were forced to flee in 1939 ahead of German occupation during World War II. Baade was born a year later in Poland.

Baade’s early childhood was tied to the violence and geopolitical maneuvering of World War II. Her father, a professor of forestry, was conscripted by the German army. The rest of Baade’s family lived in the German city of Halle, which was bombed nearly every night towards the end of the war.

In one instance, a bomb landed directly on top of a bunker that her family was sheltering in, knocking out power and obstructing the entrance with rubble for hours.

“When it was over … we went outside and there was a dead horse on the ground and people were already cutting it up for food,” Baade said.

When the war ended, Baade’s father returned to teaching for a number of years before the Soviet military government pressured him to spy on his students. He was interrogated daily by officers until they threatened to send him to Siberia and his wife to Russia if he did not comply.

The family fled to East Germany on Dec. 31, 1951. Baade recalled crossing the border on foot and being nearly discovered by two guards on patrol as their dog barked furiously towards the ditch where her family hid.

“We could hear one man saying to another, ‘We should investigate why the dog is barking,’ and then you could hear an older voice who said, ‘It’s New Year’s Eve, who do you think is going to be out here? And I want to get home to my wife and celebrate New Year’s Eve with her’,” Baade said.

Before they left, Baade’s father told her and her siblings to put on as many layers of clothing as they could because they could not take any more with them. Despite the grim nature of her story, Baade smiled at the memory of piling clothes onto her wriggling 5-year-old brother’s frame.

“He looked like a teddy bear and the problem was he couldn’t keep his arms down,” she said, laughing.

Baade and her family came to America in 1956, and she attended high school in New Jersey. Baade’s mother soon became pregnant with her second brother and her parents told her that she needed to work in a factory to assist them with paying the hospital bills.

Baade, with her mind set on getting a college education, continued to attend school part-time and worked at the factory over the summer and in the afternoons during the school year, giving most of the money to her parents.

“Whenever my brother gives me a tough time, I tell him, ‘I paid for you’,” Baade said, laughing.

Baade attended Upsala College in East Orange, N.J., to study German and English, and it was at Upsala where she fell in love with future husband, Peter Baade. The couple courted for 15 months and married in 1961. They moved to Edgecomb in 1965.

After teaching in a variety of environments, including a juvenile detention center, Baade joined Boothbay Region High School in 1977. A passionate instructor, she founded the school’s German language program and, in 1990, introduced the German American Partnership Program to the school system.

Baade co-founded the Holocaust Human Rights Center in 1985 after attending a seminar on teaching the Holocaust at Bowdoin College in Brunswick the year prior.

Headquartered at the Michael Klahr Center at the University of Maine at Augusta, the Holocaust and Human Rights Center of Maine presents programs, exhibits, and learning opportunities for students and teachers across the state.

Baade was the president of the center’s board at one time, and continues to serve as a member. Her sharp memory is immensely useful in her work with the center. She often serves as a de facto historian for the other members, she said.

However, Baade’s ability to find levity or positivity among the more difficult periods of her life is equal to, if not more remarkable than, her memory.

Peter Baade passed away in August 2020, and while she misses him dearly, she chooses to talk much more about their countless good times together.

“People sometimes would say to me, ‘This must be a really hard time for you.’ My constant reply was, ‘These are the good days, these are the good times. Peter is alive, he’s home,” Baade said.

“Being together, holding each other’s hands, and just knowing that they’re there; if you have a good marriage that’s really all you need,” she added.

Outside of the Holocaust and Human Rights Center, these days Baade dedicates much of her time to her garden, the Water of Life Lutheran Church in Newcastle, and her daughter, Sanna Baade, who also lives in Edgecomb.

Baade also writes and is working on a story about her first date with Peter and her complex relationship with her mother, which she plans to title “The Dress.” Rather than trying to publish her stories, she says she is just writing them for her daughter.

Luckily, she’s happy to share her stories with all those who ask, too.