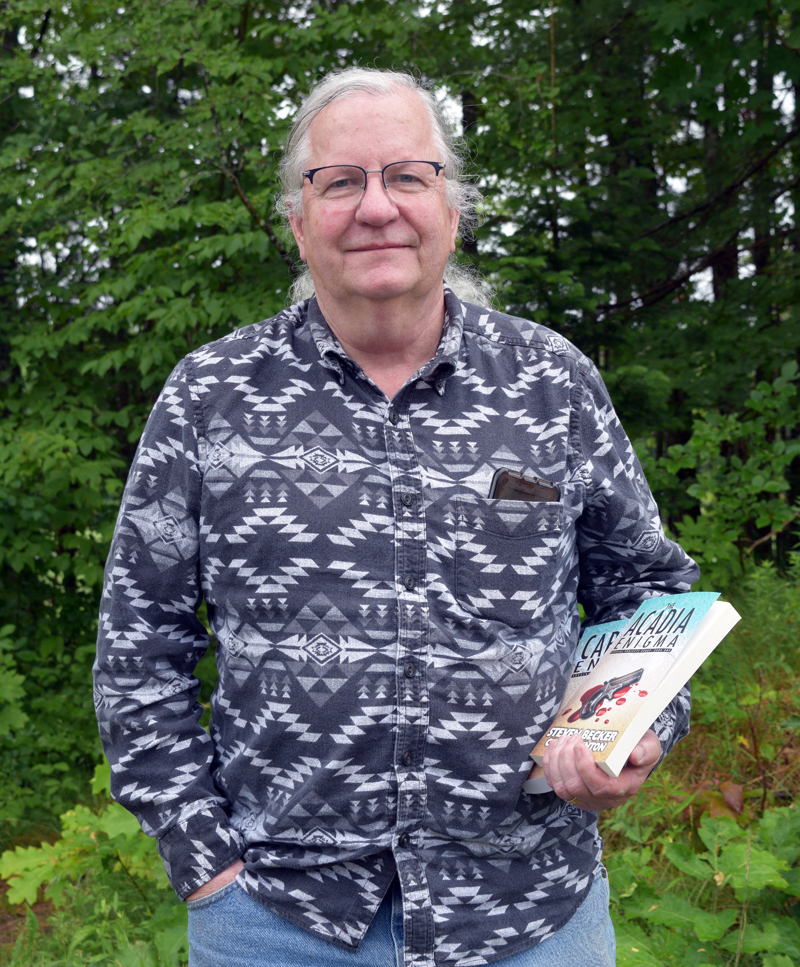 When asked, Chuck Benton isn’t sure how to explain what he does. Not because he doesn’t have anything to say, but because he has so much.

“I’m a chameleon. I take whatever role makes sense in the setting of the moment,” Benton said.

These days Benton can be seen playing the keys with his bands at a variety of venues around Lincoln County, but the man sitting behind the keyboard at Schooner Landing has quite a bit more going on in an average year than many do in a lifetime.

Now a resident of Nobleboro, Benton was born and raised in central Massachusetts. He attended the University of Illinois Urbana-Champaign and trained as a commercial airline pilot before he got his first job working for a flight simulator company.

In the late ‘70s, Benton talked the company into buying him the recently released Apple II computer so he could learn how to automate some of their programs. He ended up using that cutting-edge piece of machinery to write a text adventure game that would shape the trajectory of his career.

“I was single, (in my) young 20s, and I ended up writing a game that was basically about partying and chasing women,” Benton said, laughing. “By today’s standards it’s maybe PG-13.”

The text adventure developed a cult following, and Benton sold the rights to the video game developer Sierra On-Line Systems. He accepted an offer for $5,000, or 1% of the game’s sales, not anticipating that his game would inspire an adult-themed video game series that would gross millions of dollars over the course of nearly a dozen titles.

“I should be retired living on a yacht somewhere,” Benton said.

Despite losing out on his would-be fortune, Benton is far from bitter, as that first deal with Sierra kick-started an immensely successful career in software development, from video games to augmented reality projects for the U.S. military.

Benton developed 15 games in his tenure as a video game developer, including versions of Frogger for Atari and Commodore systems. This earned him a sort of rock star status in the industry for a period of time, and he even made an appearance in Time magazine in October 1981.

Some 40 years removed from that life, Benton’s time in the video game industry will still come up, even in the most professional of settings.

He was once at a conference to present on a protocol he developed with the federal government for ship identification systems, and the person that introduced him mentioned his involvement with video games. After the presentation, it was suddenly as if Benton was back in the 1980s.

It was during his time with Sierra that Benton got married and decided to move to Edgecomb with his wife in 1984, where they stayed for the next 27 years.

When Benton left the video game industry in the late ‘80s, he was recruited by the Defense Advanced Research Projects Agency to develop training systems based on video game technology, which led him to start a company, Technology Systems, to work on a variety of classified projects for the federal government.

Benton has spent his career on the cutting edge of technology, from the Apple II to augmented reality. To this day, Benton, describing himself as “pseudo-retired,” said that he tries to work 40 hours a week on projects for his new company, Team Augmented Reality Inc.

“Most of my career’s been identifying emerging technologies and figuring out ways to use it,” Benton said.

However, Benton’s career and interests don’t fit into a neat little box like video game developer or government contractor. He also spent much of the early 2000s skippering a schooner off of the coast of Castine, sailing frequently to Nova Scotia and earning his U.S. Coast Guard master captain’s license in the process.

When his children grew up and left the house, Benton used the instruments he had around the house, particularly his keyboard, to cope with their absence. Eventually, Benton joined two bands, The Gulch and Papa Tim and The Desperate Man’s Blues Explosion, or Papa Tim for short.

Benton mostly plays keyboard, but he’s also worked his way into singing backup, and even some lead vocals. Since becoming ensnared in the local open mic community in Lincoln County, Benton has been the face of a number of informal music festivals featuring local acts at his home and later his friend Rebecca Graham’s home in Edgecomb.

As if this all weren’t enough, Benton has also taken up writing, and has co-authored two books in his Special Projects Group series since 2020 in collaboration with established author Steven Becker and editor Cathy Dee.

Both of Benton’s crime novels, “The Acadia Enigma” and “The Cape Cod Enigma,” take place in coastal New England locales and follow two FBI agents as they investigate both a serial killer and crime ring. Benton anticipates publishing his third book, “The Liberty Enigma,” by October.

Benton’s background clearly lends itself to his subject matter, as a sailor himself with experience working with the U.S. Department of Defense’s Rapid Reaction Technology Office. He said that working with a professional author and editor has made him a more discerning writer, sometimes to his chagrin.

“Now that I know what I should be doing and what I shouldn’t be doing, it’s become… a lot harder to write,” Benton said.

Although Benton continues to work on projects through Team Augmented Reality, plays gigs with his bands, and writes multiple books a year, he only does it because he enjoys it.